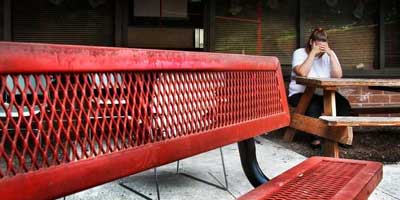 It's the last thing a beaten, bruised and frightened woman needs to hear when she calls a women's shelter, the refuge of last resort.

"We can't help you right now."

But, increasingly, it's what domestic violence victims, many with children, are told in Marion County.

"They are hearing the words of their abusers, who tell them, 'No one's going to help, no one cares about you -- you are stuck here with me.' "

Women's advocates sounded the alarm Friday for what they said is the worst shortage of shelter space for battered women and their children they've ever seen.

Some shelters are putting women on waiting lists for the first time. Other families are forced to stay for long periods on emergency cots, in group living conditions. Still others are forced into even more dire situations: The Marion County prosecutor's office knows of at least one woman who is living in her car after being turned away.

But unlike in past years, when the usual summer surge subsides, this year has seen no drop-off. Officials said the funding shortage has kept people from moving out of shelters and into transitional housing.

Calls for shelter services to a hotline -- Connect2Help (211) -- have increased 36 percent over the past two years. The Salvation Army Shelter for Women and Children has helped 318 more people this year than it had last year at this time, and it's the same story at other shelters such as the Julian Center in Indianapolis and Sheltering Wings in Danville.

Julie Marsh, chief executive officer of the Domestic Violence Network, said her organization is having a drive to raise $30,000 to relieve the pressure on local shelters. It is about halfway there, thanks to a $10,000 donation from the Women's Fund of Central Indiana.

Marsh said the money would buy hotel rooms for 370 nights for women.

"These funds will go directly to help people in life-threatening situations," Marsh said. "This is a critical issue at a critical stage. We need to help those who are fleeing domestic violence."

People such as a 30-year-old mother of two from the Eastside who has been at an area shelter for three weeks.

The woman, who didn't want her name used because her boyfriend threatened to find her and kill her, said she was kept as a prisoner in her house for seven years and wasn't allowed to work.

She went to a shelter after the boyfriend, 42, came home drunk, punched her and choked her to unconsciousness twice.

When he passed out, she swooped up her sons and left.

I had nowhere else to go

"I had never heard of this place before," she said of the shelter. "I went to a friend's house, and they told me about it and took me. I had nowhere else to go."

When the shelter can't help, the victims are sometimes forced into situations nearly as perilous as the ones they left.

Kendah Ward, a victims advocate in the prosecutor's office, said she helped a woman this week after her husband was arrested for hitting and kicking her.

The couple lived with the man's family, and the family threw the woman out. She tried to find a shelter, but each one she called was full.

So she's living in her car and trying to get gas money from out-of-state relatives so she can live with them, Ward said.

The shelters said the space shortage is exacerbated by the disappearance of federal funds for transitional housing.

Indianapolis received $3.9 million in Homeless Prevention and Rapid Re-Housing Program funds in 2009 as part of the federal stimulus package. The money helped economically distressed people pay for housing while they tried to get back on their feet.

With the money gone, there's a backlog of people forced to stay in shelters longer. And with fewer jobs available, women are having a harder time paying for their own places to stay.

"It's harder for people to get jobs, and many are seeing their unemployment benefits run out," said Betsy Whaley, director of housing and outreach programs for the Julian Center. "It's a perfect storm of things happening at the same time."

Experts and advocates said the economy also is a reason for the spike in domestic tensions.

"It creates family pressure when someone gets laid off," said Lt. Tim Leffler, who heads the domestic violence unit for the Indianapolis Metropolitan Police Department. "We have been working hard to keep up with our caseload."

Marsh said a long-term solution is probably partnerships with businesses that have unused space. She said a task force made up of city officials, business leaders, the judiciary, the education sector and the medical profession will be meeting soon to develop long-term solutions.

"Because this surge does not seem like a problem that's going away, we need to ask if we need more space and where we can find it," Marsh said. "Is there a school not being used or a summer camp? Between all of us, maybe we can come up with something."