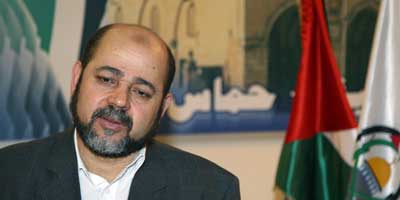 The following article was written in January, 2009, by Al Jazeera freelancer Shane Bauer.

Seven months later, Shane was in prison in Iran, on suspicion of espionage.

He is still in Evin Prison, where he is held virtually incommunicado with friend and fellow traveller, Josh Fattal.

Hamas: We will win war in Gaza

Hamas political deputy sets out conditions for a ceasefire with Israel.

Israel's war on Gaza has left more than 700 Palestinians dead - nearly a third of them women and children - and more than 3,000 injured.

But at the organisation's headquarters in Damascus, 100km from the territory, Musa Abu Marzouq, the deputy head of Hamas' political bureau, told Al Jazeera why he believes his organisation is on the verge of victory against Israel.

Shane Bauer: Under what conditions will Hamas agree a ceasefire with Israel?

Abu Marzouq: We have three conditions for any peace initiative coming from any state.

First, the aggression of the Israelis should stop. All of the gates should be opened, including the gate of Rafah between the Gaza Strip and Egypt. Finally, Israel has to withdraw from the Gaza Strip.

We are not saying we will stop firing rockets from the Gaza Strip to Israel - we are only talking about stopping the aggression from the Israelis against the civilian population in the Gaza Strip.

When others talk about a ceasefire, they are saying all military operations should stop.

But we are sending a message [by firing rockets]: "We will not surrender. We have to fight the Israelis and we will win this battle."

Abu Marzouq: We are defending ourselves.

When you talk about any occupation, people should resist the soldiers and the army who occupy their country.

We don't have weapons sophisticated enough to launch at exact targets.

We are sending a message: "You can't provide security to your side until you bring security to the Palestinian side."

We are looking for freedom and for security for the Palestinian people. This is our message to Israel.

They need to understand that we are working for an independent state.

How do you think Israel's war on Gaza will affect Hamas' position?

Abu Marzouq: The Israeli push against Hamas has increased our popularity sharply among the Palestinian people and throughout the Muslim world.

After the Israelis killed Hamas leaders like Ahmed Yassin and Ismail Abu Shanab, Hamas won the elections with 76 seats out of a 132-seat parliament.

Using these means doesn't decrease the popularity of Hamas, it increases it.

What exactly would you consider to be "victory" for Hamas?

Abu Marzouq: A victory for Hamas would mean the Israelis did not accomplish their objectives.

If they can't stop rockets from coming into Israel, that means they failed.

But the real reason for Israel's aggression is to change the Hamas government in the Gaza Strip - they have been thinking about this since Hamas won the elections - it is not because of the rockets.

They failed to lead the people in an uprising against Hamas in the Gaza Strip with their economic embargo.

They tried to push Fatah to stand and fight Hamas, but we defeated them in the Gaza Strip, so the Israelis have taken action themselves.

Why, at the beginning of this conflict, did Hamas decide not to renew the six-month ceasefire?

Abu Marzouq: We agreed to this ceasefire under Egyptian mediation with certain conditions.

All military operations were to be stopped by June 19. All of the six gates between Israel and Gaza were to remain open.

Also, there was to be a meeting between the Europeans, Egyptians, the Palestinian Authority and Hamas to discuss how to open the Rafah gate.

Finally, the ceasefire was supposed to be extended to the West Bank.

During those six months, the Israelis kept the border crossings closed most of the time.

Only 15 per cent of goods were allowed to enter the Gaza Strip from Israel.

On many occasions, the Egyptians told us that the Israelis were not respecting the agreement.

Their refusal to allow supplies to enter was a type of slow killing of the Palestinians.

The Palestinians eventually asked: "What is the use of this ceasefire for us?"

For that reason, we didn't renew that agreement.

Khalid Meshaal, the leader of Hamas, in December called for a "military intifada against the Zionist enemy" and as a "peaceful intifada internally". What did he mean by an internal peaceful intifada?

Abu Marzouq: I think he meant that there needs to be internal change among the Palestinians.

Right now the Palestinian Authority in the West Bank controls everything. This is not acceptable.

We need to peacefully change these conditions.

How are relations between Hamas and Fatah now?

Abu Marzouq: Now the priority for Hamas, Fatah or any Palestinian organisation is to stand against the Israeli aggression.

After we finish with this battle, I guess we can talk about reconciliation or reuniting with Fatah.

We openly welcome any kind of negotiation or dialogue between Fatah and Hamas to end the separation of the Palestinians.

When French president Nicolas Sarkozy met with Syrian president Bahsar al-Assad, many said he tried to encourage Damascus to put pressure on Hamas to stop firing rockets. Have you faced any kind of pressure from Syria?

Abu Marzouq: We haven't seen any pressure from Syria.

Has Hamas had any contact with the administration of Barack Obama, the US president-elect?

Abu Marzouq: No, we haven't had any direct contact.

Do you have any expectations regarding the approach of Hillary Clinton, the US nominee-designate for the post of US secretary of state?

Abu Marzouq: We cannot evaluate something that lies in the future.

We know that in the US senate, Hillary Clinton's vote was always with Israel, but maybe there will be some differences when she becomes secretary of state.

AL JAZEERA: Hamas: We will win war in Gaza