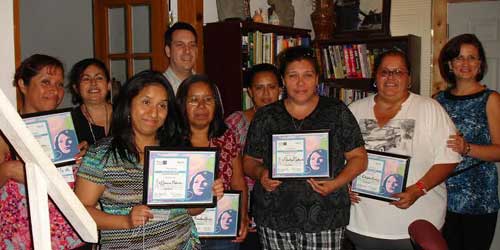 Promotoras completed training sessions that enabled them to educate female Hispanic farmworkers on cervical cancer and access to cancer screenings in the US state of Georgia. Photo credit: Dr. John S. Luque

The fight is still on:
Finding new ways to improve sexual & reproductive health in the US

Despite advances in health information dissemination and the increased sophistication of diagnostic technology over the past few decades, developed countries such as the United States are seeing surprising prevalence of preventable sexual and reproductive health conditions.

For the first time since 2006, US rates of several sexually transmitted infections (STIs) rose in 2014, a pattern which experts suggest could be a result of diminished access to clinics that provide STI testing.

Morality-based legislation and high-profile criticism of basic sexual and reproductive health services have contributed to decreased availability of preventative care and treatment.

These acts by influential leaders can also legitimate notions of sexual impropriety, leading to intensified stigma and ignorance associated with basic healthcare access.

At the same time, recent political exploitations of concerns such as foreign terrorism and illegal immigration have exacerbated cultural tensions. Many ethnic groups in the US face increased discrimination due to race or national origin, producing isolation and mistrust that make the provision of preventative healthcare difficult.

New threats to public health highlight the urgency of sexual and reproductive healthcare needs -  a notable example being the Zika virus outbreak in North and South America. Regions characterized by poor sexual education and restrictions on contraception access will likely continue to be hit hardest by the devastating consequences of the virus.

Many medical professionals, healthcare facilities, and community-based organizations advocate to improve patients' access to sexual and reproductive health. In the meantime, they continue to provide care within their existing circumstances and strive to determine the most successful methods of ensuring that care reaches those most in need.

Across the US, new programs are emerging that have shown effectiveness in addressing cultural and logistical barriers to providing sexual and reproductive health services.

These ideas have helped reduce health disparities among vulnerable populations and have the potential to stimulate widespread gains in additional settings.

Sample contents of an at-home testing kit provided by I Want the Kit. Source: www.iwantthekit.orgThe US state of Alaska has the highest chlamydia rate and the fourth-highest gonorrhea rate in the country. The state's rurality and geographic isolation contribute to residents' difficulties in accessing healthcare. Even when healthcare facilities are available, the intimacy of close-knit rural communities leads to perceptions that confidentiality is unrealistic: in towns where faces and vehicles are easily recognizable, it can seem impossible to keep sensitive medical issues from neighbors or colleagues.

The disproportionately low rates of STI diagnosis and treatment among rural Alaskans made the state an ideal setting for the I Want the Kit program through the Johns Hopkins University School of Medicine. By visiting the website www.iwantthekit.org, any resident of Alaska (or Maryland, or Washington, DC) who is 14 years old or older can order a free STI testing kit to be received in the mail in nondescript packaging. A user can collect his or her own genital and/or rectal samples at home and mail them back for chlamydia, gonorrhea, and trichomonas testing. The Alaska Native Tribal Health Consortium (ANTHC) launched the program in Alaska and provides risk counseling and referrals for treatment.

Over the first three years of I Want the Kit-Alaska, 1,671 testing kits were ordered by Alaskans representing 106 communities, including 28% by American Indians/Alaska Natives. Of the samples returned for testing, roughly 12% tested positive for one or more of the STIs, and roughly 98% of those who tested positive received treatment as a result. 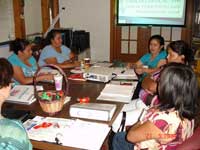 Promotoras completed training sessions that enabled them to educate female Hispanic farmworkers on cervical cancer and access to cancer screenings. Photo credit: Dr. John S. LuqueHispanic women have the highest incidence rate of cervical cancer as compared to other ethnic groups in the US. In locations with limited Spanish-speaking healthcare professionals, particularly in rural areas or newly emerging immigrant communities, it can be difficult for women to access consistent healthcare services.

The promotoras completed 12 hours of training in topics related to female anatomy, cervical cancer, cancer screenings, the HPV vaccine, and health resources. Through group outreach sessions, the promotoras then presented information and led interactive activities to increase women's awareness of cervical cancer and to promote cancer screenings. Women who participated in the program showed increased levels of knowledge in these health issues with increased awareness of how to access screenings and vaccines.

By partnering with a Hispanic-serving nonprofit organization in the community, the program was able to increase community collaboration and continue implementation of promotoras in ongoing migrant health education efforts. Researchers hope to soon test the program on a larger scale in Charleston, South Carolina, and Augusta, Georgia.

Challenge: Stigma associated with being at risk for STIs; unawareness of testing opportunities
Solution provided: HIV testing as a standard for all emergency room patients 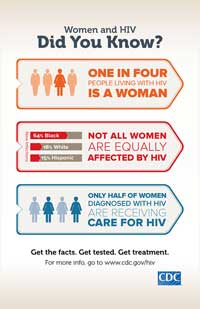 Source: Division of HIV/AIDS Prevention, National Center for HIV/AIDS, Viral Hepatitis, Sexual Transmitted Diseases and Tuberculosis Prevention, Centers for Disease Control and PreventionBecause an estimated 20% of HIV-positive Americans remain undiagnosed, efforts to improve survival rates and prevent transmission of HIV must include overcoming barriers to testing. The stigma of perceived risky sexual behavior keeps many people from seeking out testing, and their ignorance of the risks poses a danger to themselves and their sexual partners.

The study showed that patients who received the opt-out approach were significantly more likely to accept HIV testing, increasing their chances for HIV early detection and treatment. During the study period, 65.9% of the opt-out patients accepted testing, compared to 51.3% of the active-choice patients and 38.0% of the opt-in patients.

Showing Promise for the Future

The examples described above represent just three of the many innovative approaches to sexual and reproductive healthcare taking place in the US and across the globe. By continuing to develop creative solutions and share best practices widely, medical practitioners are creating valuable tools for overcoming common barriers experienced within the field.

At a time when patients and providers are facing obstacles on many fronts, these successes demonstrate the positive outcomes that are possible when challenges are identified and targeted through the implementation of creative designs.

For more information on sexual and reproductive health in the US, visit:

To take a free online quiz to estimate your STI risk, visit https://iwtk-app.iwantthekit.org/quiz

Singh, S., Darroch, J.E., and Ashford, L.S. Adding It Up: The Costs and Benefits of Investing in Sexual and Reproductive Health 2014. Guttmacher Institute, 2014

Joshi, S. Reproductive Health and Economic Development: What Connections Should We Focus on? Population Reference Bureau, 2014.

Gambino, L., Kingsley, P., and Nardelli, A. Syrian refugees in America: separating fact from fiction in the debate. The Guardian, 19 Nov 2015.

IWTK - I Want The Kit