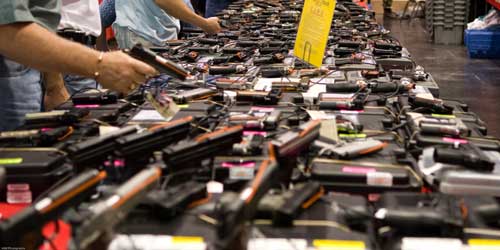 The Struggle for Arms Control

These were the words used by US President Barack Obama following a shooting in Colorado Springs which left three dead and nine injured. The suspect, 57 year-old Robert Lewis Dear, targeted a Planned Parenthood clinic wielding a ‘long gun’ in his attack which resulted in a tense standoff with police. Dear was apprehended at the scene and was reported to have been muttering 'no more baby parts' implying the motivation of the attack was based on his opposition to Planned Parenthood and the practice of abortion.

Following the attack, President Obama gave a statement urging for tighter control of gun ownership in the United States, stating that the country had 'to do something about the easy accessibility of weapons of war on our streets to people who have no business wielding them'.

This is far from the first time President Obama has led the calls for additional gun control; throughout his presidency there have been high profile mass shootings in Colorado, Wisconsin, Connecticut, and South Carolina, in addition to many others. In almost every instance, President Obama has tried to introduce legislation to limit the sale of high powered assault weapons and large calibre ammunition magazines.

Every attempt has been an unequivocal failure with no amendments made to US gun control legislation. This has been attributed to a number of factors - including the Republican control of Congress, in addition to the high levels of influence held by pro-gun lobbyists such as the National Rifle Association.

The location targeted in this shooting adds an additional dynamic to the tragedy, as it speaks to an increasing tension within the United States on the topic of abortion and the presence of Planned Parenthood clinics across the country.

Planned Parenthood is a non-profit organisation with over 700 clinics in the United States which provides reproductive health services, most notably abortion. However, the group also provides advice and medical care on birth control, breast and ovarian cancer screening services, as well as other women’s health services. There have been a number of protests against Planned Parenthood in the past – mostly from ‘pro-life’ organisations which fundamentally oppose abortion on the basis of their belief that it constitutes murder. There have also been allegations from opposition groups that foetal tissues are sold by the Planned Parenthood, though these claims have never been substantiated.

Planned Parenthood receives state funding and there have been many calls, mostly from Republican representatives, calling for the organisation to be defunded.

Following the shooting, Illinois Republican Congressman Adam Kenzinger stated that the shooter may have had a “legitimate disagreement” and criticised the president of Planned Parenthood who referred to Dear as an 'extremist' and referred to the shooting as an act of ‘domestic terrorism’.

In the face of adversity there have been many messages of support. The hashtag #IStandWithPlannedParenthood took off on twitter with both Democratic presidential candidates Hillary Clinton and Bernie Sanders tweeting their support for the organisation following the shooting.

'We know that women’s health and women’s bodies have been under a constant threat of attack, and we are here to stand with Planned Parenthood'.

What is Planned Parenthood? The Significance of Legalised Abortion

The vociferous and at times violent opposition to Planned Parenthood often serves to deter vulnerable women from utilising its core healthcare services. The right to abortion has been considered a fundamental one by legislation in the United States ever since the landmark case of Roe v Wade in 1973. There are a huge number of social benefits to allowing abortion, most crucially helping to ensure the safety and emotional and physical wellbeing of women who wish to undergo the procedure.

Prior to the decision to legalise abortion in the United States, estimates suggest there were between 200,000 and 1.2 million illegal abortions. In 1972 alone, 39 women died are known to have died as a result of illegal abortions, with many more unknown instances of women dying or being severely and permanently injured in the process.

Now that abortion has been legalised, the death rate is only 0.6 per 100,000 procedures. Legalising the practice not only provides a strong moral stance on abortion, which tacitly implies the belief that a woman’s body is her own, but also protects vulnerable women from the severe risks of harm from illegal or self-performed abortions.

Despite the proven health and social benefits of allowing legalised abortion, recent opinion polls suggest that support for abortion has fallen below 50% for the first time since 2001. Some blame can be placed upon increasingly partisan right-wing politics, along with propaganda circulated by opposition groups apparently showing procedures undertaken illegally after the third trimester and discussions amongst practitioners about the sale of foetal organs.

This kind of rhetoric will no doubt have influenced many individuals opposed to abortion, and based on ongoing reports, may well have motivated Dear in his massacre. The President of Planned Parenthood, Cecile Richards, has always stated that the videos circulated by opposition groups are false, and solely an attempt to deceive the public on the organisations practices.

In spite of the increasing debate over the efficacy of legalised abortion in the United States, an additionally contentious issue is also at the forefront of public thought following the shooting in Colorado Springs. This is the unrestricted nature of gun ownership in the United States, and whether further restrictions being imposed would have prevented this kind of massacre.

The simple fact is, that under the current legislation there have been 996 mass shootings in the United States in the past three years, equating to 1,260 deaths and 3,606 injuries. There is no evidence to support the contention of pro-gun lobbyists that ‘concealed carry’ legislation has impeded the increasing instances of gun based violence.

At this stage it is overtly apparent that change is necessary.

As I have stated in previous articles for Safeworld on the issue of gun control and mass shootings, gun based violence is a practice which disproportionately affects women. Studies undertaken in the United States show that gun ownership increases the chance of a woman becoming a victim of homicide at the hands of her husband or boyfriend by 278%.

The presence of a gun in the home also has an impact on the instances of violent abuse on women by their partners. If those committing acts of domestic violence are gun owners, it reduces the likelihood that an outside party will be able to intervene and help women suffering from domestic violence, in addition to preventing the women from being able to resist their abusers.

In summary, the tragic events in Colorado Springs highlight that the stagnation of attempts to change the approach to gun control in the United States has resulted in an abject failure to prevent violence being proliferated by those trying to further their own twisted agendas. Further to this, the shooting is indicative of a worrying trend of opposition towards abortion, which represents one of the primary features of a society which values not only women’s health but also women’s rights.

Although very few who oppose abortion would condone the actions of Robert Lewis Dear, there is a sad irony to the fact that he was not only able to acquire a lethal firearm with such ease, but that he subsequently used it to end the lives of innocent civilians in the name of protecting the ‘lives’ of pre-foetal embryos.

It can only be hoped the blatant hypocrisy of this act of horrific violence resonates within popular opinion and finally leads to a change in attitudes towards gun control in the United States, though history does not suggest that any change will be immediately forthcoming.

USA: How Many More Mass Shootings Before Reform in Gun Control? - June 2015

Will the Arms Trade Treaty Make the World Safer? - April 2013

USA: To stop the massacres, control the guns - August 2012

Do Guns in Peacetime Make the World a Safer Place? - July 2012