USA: To stop the massacres, control the guns 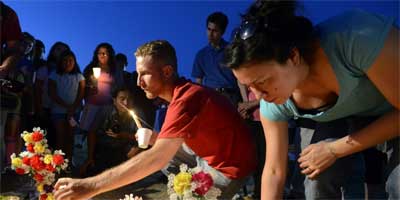 For a nation still reeling from the devastation wrought by James Holmes in Aurora Colorado, the reports that another mass shooting had occurred on US soil came as distressing news.

It was just over a fortnight before, that the ‘dark knight’ shootings in a cinema in Colorado claimed the lives of twelve people. In this more recent attack, six were shot dead in a Sikh Gurdwara in Wisconsin. The previous shooting had conjured up a fresh debate into the nature of the United States gun control legislation, with many calling to see the rules tightened in hope of preventing similar atrocities re-occurring. There are several differences in the two instances however, there is no doubt that many will begin to question whether the protection of gun lobbyists interpretation of the 2nd Amendment is worth risking further atrocities.

The shooting in the town of Milwaukee, Wisconsin occurred on Sunday, 6th August resulting in several fatalities. The shooter was a man named Wade Michael Page, an ex-soldier who is alleged to have had links to white supremacy groups, explaining his choice to attack a Sikh Gurdwara. The FBI are treating the incident as one of national terrorism, as more and more evidence comes to light suggesting that unlike the Colorado attack, this was motivated by race. Page was covered in tattoos synonymous with racial hate groups, such as the ‘Cross of Odin’ found on his left shoulder, which is one of the most widely recognised symbols amongst white supremacists.

Comparisons have been drawn between the massacre in Wisconsin, and that which occurred in Colorado little more than a fortnight before. However, the motivations of the killers appear dissimilar along with their mental states. James Holmes, the perpetrator of the Colorado shooting has been presented as a man with severe psychological issues, a point which pro-guns campaigners have used to defend existing gun control laws. In the case of Colorado, it was not the ease with which guns were available to Holmes, which resulted in the massacre, but the mental state of the individual that was the cause and issue. There are already laws in place which prevent the sale of weapons to the criminally insane, so on this basis, there is no need for reforms to gun legislation, as the issue with Holmes was that he was able to circumvent the existing rules. However, in the case of Page, people who knew him have described him as fairly normal and mild mannered, but with extreme right-wing political leanings, he had often spoken of an upcoming racial holy war.

Despite his overtly disturbing beliefs, he was not a mad man, he was able to buy weapons and use them within the parameters of the existing system without difficulty (he only bought the handgun used in the attack eight days before the event), and this is the reason why many are calling for changes to gun control legislation in the United States.

This is a clear issue with the gun control laws in the US, the extremely limited level of checks done on individuals is not enough to ensure that those likely to commit acts of terror, or other massacres cannot obtain weaponry. This extends beyond guns to other equipment. In the Colorado attacks, James Holmes was able to use CS gas canisters and laced his home with a maze of booby-traps. It is equally worrying that someone with affiliations to racial hate groups was able to obtain guns.

In the UK, background checks are extremely thorough with regular visits to licence holder’s homes, where suspicious activity or material is noted by the inspector. That is not to say the UK gun control laws are perfect, but it surely provide a more sound basis of protection than that found in the US.

Two gun based massacres in almost as many weeks, does call into question whether America should begin to question the nature of the second amendment, allowing citizens to bear arms, and ask whether or not amendments should be made to legislation, so that those seeking to do real harm with weapons cannot obtain them.

Do Politicians Care About Guns?

Politicians in America are often reluctant to address the issue of gun control. In recent years, the debate has seen increased polarisation of those opposed to, and in favour of tighter restrictions, and politicians can often find this difficult to navigate.

President Obama has expressed deep sadness following the shooting in Wisconsin, but has also called for ‘soul searching’, and a way to resolve the issues which have led to two shootings occurring in such a short space of time. In a statement on the 6th August, the US president stated, "All of us recognise that these kinds of terrible, tragic events are happening with too much regularity for us not to do some soul searching to examine additional ways that we can reduce violence".

Previously, the President has remained mute on the issue of gun control, and with the 2012 elections coming up, it seems unlikely any decisive changes will be made to weapons legislation in the United States. On a global note, earlier this year, a United Nations conference held in New York to discuss the issue of the Arms Trade failed to reach a referendum on an international arms trade treaty. This would have put tighter controls on the sale of weapons, and would hopefully have made them inaccessible to those such as the Syrian Assad regime, which appear likely to use the equipment to commit human rights abuses. The treaty was scuppered by the failure to commit of high profile nations Russia and the United States, showing that the USA’s love affair with the weapons industry is far from diminishing.

Detailed statistics on firearms are limited, in that the most readily available data is from 2010, but it is clear that although the overall murders committed in the US is dropping, the vast majority of homicides feature guns as the primary weapon. Of a total of twelve thousand nine hundred and ninety six murders in the US in 2010, eight thousand seven hundred and seventy five were committed using firearms. It is difficult to use statistics in support of the current system of gun control, as there has not been much recent research done into the use of firearms for protection.

A survey taken in 1982 found that 40 percent of criminals had been deterred from committing a crime as they believed the intended victim was armed, and 34 percent had been scared off by being threatened with a fire arm. However, the increasing levels of violent crime committed by far right groups, and the levels of violent crime involving fire arms strongly suggest that tighter gun control is needed.

Women and Children are Vulnerable to Gun Violence

In the case of Page, guns were used against a peaceful minority group, who posed no threat to him, but were nonetheless attacked under the premise of maintaining white supremacy and racial purity. His logic was deeply flawed, but as is often the case, it is the most vulnerable groups which bear the brunt of violent crime.

In the case of women and children guns are no exception. Many states lack the proper legislation to see that women and children are properly protected from gun violence, only nineteen states have a law ensuring weapons must be locked away from minors. 5 percent of the total fatal accidents befalling 0-14 year olds are caused by guns, showing that laws obligating manufacturers to make sure safety catches are present on guns - are not enough to ensure the safety of minors.

Women also suffer at the hands of gun violence, both the rate of domestic violence and murder increase drastically when a gun is kept in the home. Though there is the counter argument that women are better able to defend themselves with access to weaponry, the majority of homicides committed against women is from within the home, predominately by a husband or boyfriend. The chance of these homicides occurring against women increases by 278 percent - if there is a gun present in the household. These kinds of statistics show that often the case for the use of guns for protection, is not strong enough to support keeping a gun.

It is unfortunate that the ongoing gun control debate and the protection of the 2nd Amendment to the Bill of Rights have over shadowed the clear evidence of risk to vulnerable groups.

The atrocity committed by Page has highlighted several things. Firstly, that there is an increasing level of threat from domestic terror groups in the US, such as those with far right and racist leanings. Page was a part of this network and acted on the premise of its beliefs. There is a clear need to address this issue, as before 9/11, the largest terror attack on US soil was the bomb attack on a federal building in Oklahoma by Timothy McVeigh, a man with deep right wing convictions.

Secondly, Page’s actions have clarified that there is a real call for changes to be made to gun control legislation in the United States. Background checks must be made more stringent and serious, thought must be put into ways of preventing the circumvention of the existing system as a means of obtaining weapons for violent crime. The fact that both Page and Holmes were able to buy weapons with such ease highlights, shows just how serious the need for reform is, even without considering the massive predominance of firearms in murder statistics for the US.

Finally, the assault by Page has highlighted that the victims of these attacks are often those most at risk. In this instance, it was a peaceful religious community, unfairly chosen to be the victims of this assault. However other groups such as women and children are also extremely vulnerable to gun crime, and legislation needs to be put in place to ensure their safety, and that those seeking weapons as a means to aid perpetrating crimes against at risks groups should be stopped.