Linda Carty: 'I’m in hell on Death Row but I didn't kill anyone...' 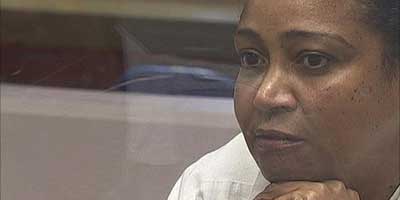 “If I have to die, I pray that my family, especially my mother and daughter, will not look and not feel ashamed. It isn’t because I am guilty, it’s because the state of Texas has failed and failed me badly.”

The first British woman to face the death penalty in 50 years has spoken from a Texan jail cell to insist she is innocent and her life is a living “hell”.

Grandmother Linda Carty, 53, has been on death row for 10 years after being found guilty in a circumstantial case of kidnapping and murdering a mother to steal her newborn baby.

Human rights groups and a raft of celebrity supporters have blasted her defence lawyer, claiming his handling of the case was shambolic.

There was no forensic evidence linking her with the abduction and the men who carried out the crime, who claimed they were acting on her orders, only confessed to doing so after making a deal to serve lesser sentences themselves if they blamed Carty.

The poor track record of her defence lawyer Jerry Guerinot – 20 people he has represented have ended up on death row – has led him to be dubbed “undertaker for the state of Texas”.

Yet all Carty’s appeals have failed, meaning that at any moment a judge could sign her death warrant leaving her 90 days before a lethal injection.

Her plight will feature in a TV documentary this month by filmmaker Steve Humphries. He travelled to Mountain View prison in Gatesville, Texas, to hear Carty’s story. From behind the jail’s razor wire, she said: “I know nothing about this murder, nothing about an abduction, I don’t even know the victim. This is the pettiest place I’ve been in. The people hate you for being different. It’s hell, hell.”

Carty was convicted for the kidnap and murder of Mexican-born Joana Rodriguez in Houston in 2001. The 25-year-old was found bound, gagged and suffocated in the boot of a car while her four-day old son was found uninjured in another. Both vehicles were either used by or belonged to Carty.

The kidnappers said she was desperate to steal the baby to raise as her own. Police also found a pushchair, baby clothes, a baby bed and a baby bath in one car. They said scissors found in her bag would have been used to cut the baby from Rodriguez’s womb had she not already given birth.

Carty denies it all and insists she lent the cars to two men, Oscar and Chris, who used them without her knowledge in a botched robbery on the Rodriguez home on May 16.

At her trial, she said Guerinot did not even speak to her. Nor did he contact the British government, which he was supposed to under international law, because she was entitled to consular support having been born on the Caribbean island of St Kitts when it was under British rule in 1958.

She said: “How would you feel if your trial attorney never spoke to you, never addressed you by your correct name and lied and said he had to bribe me with chocolate to get a conversation going with me when I’m allergic to chocolate?” Paul Lynch, British consul general in Houston, Texas, admitted: “It is a terrible failure of the system and all I can say is that the authorities have changed the system so that it won’t happen again. But that’s too late for Linda Carty.”

Carty’s last hope lies with Michael Goldberg, of global law firm Baker Botts, who has taken up her case for free. He said: “If you throw out the criminals’ testimony, what does the state have? The state has nothing.” Also in her corner are celebrities including Bianca Jagger.

Guerinot did little to even uncover circumstances that could be used in mitigation. Had he used the funds he was given to fly to St Kitts he would have discovered that Carty was raised in a well-off religious family and worked as a teacher, but was forced to leave when she gave birth to a daughter as an unmarried mother in 1982.

In America she attended college while caring for her daughter, Jovelle. When she fell pregnant again after being raped, her life started to unravel. She put the baby up for adoption, but then fell into a series of troubled relationships. One was with a drugs kingpin, which led to her working undercover for the Drug Enforcement Agency.

In her last relationship, she suffered two miscarriages, which supporters say may explain the baby paraphernalia in her car. Jovelle, now a mother of two boys, said: “My fears are that they’ll win and my mom won’t come home.”

Carty no longer fears death but says: “If I have to die, I pray that my family, especially my mother and daughter, will not look and not feel ashamed. It isn’t because I am guilty, it’s because the state of Texas has failed and failed me badly.”

The last woman in Britain to be executed was murderess Ruth Ellis in 1955. The British Woman On Death Row, Channel 4, November 28, at 8pm