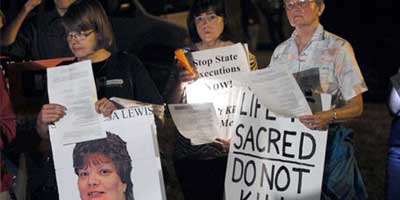 Teresa Lewis died early today after being given a lethal injection at the Greensville correctional centre, the first woman to be executed in Virginia in almost a century.

The execution went ahead despite protests from lawyers, international celebrities and others who argued that she should have been given clemency because of her low IQ. Under US law, anyone with an IQ of 70 avoids the death penalty. Lewis was judged to have an IQ of 72.

Her lawyer, Jim Rocap, said: "Tonight the machinery of death in Virginia extinguished the childlike and loving spirit of Teresa Lewis."

The 41-year-old was convicted of plotting to kill her husband, Julian Lewis, and her stepson, Charles Lewis. She persuaded two men to carry out the murders in return for sex and money. The two men received life sentences.

Lewis spent most of her final day with her family. Virginia correctional services said she asked for a last meal of fried chicken breasts, a dessert and a Dr Pepper.

In the minutes before leaving her cell, she prayed and held hands with her chaplain and with Rocap.

Wearing prison-issue denim trousers and shirt, she walked the 10 steps from her cell to the execution chamber, where five warders strapped her to a hospital trolley. Witnesses said she looked terrified.

Kathy Clifton, Lewis's stepdaughter, was in an adjoining witness room, blocked from view by a two-way mirror. The families of the victims were also present.

A prison warder held up a phone to the governor's office, in case of a last-minute decision to offer clemency.

Asked if she wanted to make a last statement, Lewis said: "I want Kathy to know I love you and I am very sorry." The executioners, dressed in black, with all identifying tags removed and hidden behind a curtain, released a sedative and a lethal dose.

Lewis was pronounced dead within six minutes of delivering her final statement.

Rocap said that she had spent her last days singing, praying and laughing. "She accepted a long time ago what was going to happen here."

The lawyer portrayed the murders in 2002 as an aberration in Lewis's life and suggested she was not the prime motivator.

Pleas for clemency were rejected by the governor of Virginia, Bob McDonnell, who said there was no "compelling reason". An appeal to the US supreme court was also turned down.

The last execution of a woman in the US was in 2005 when Frances Newton was injected in Texas. The last woman to be executed in Virginia was Virginia Christian in 1912, for suffocating her employer.

Lewis's motive was primarily money, according to the prosecutor in the case. She intended to pick up $250,000 (£160,000) in insurance from a policy Charles Lewis had taken out and which passed to his father on his death.

She recruited Matthew Shallenberger, with whom she had an affair, and Rodney Fuller, to carry out the murder. In 2002, on the eve of Halloween, she went to bed with her husband but got up to unlock the door and put their pit bull terrier in another room. Shallenberger and Fuller then shot her husband and stepson.

Lewis waited 45 minutes before calling the police, but her husband was still alive and told police she knew those responsible. She confessed a few days later.

About 6,000 people signed a petition calling for clemency, in part because of the apparent injustice of Lewis receiving the death penalty while the two men who carried out the murders received life. About a dozen people protested outside the jail.

The Iranian president, Mahmoud Ahmadinejad, referred to the case earlier this week on a visit to New York, saying the west had double standards. It criticised Iran for sentencing a woman to be stoned but failing to show the same outrage in the Lewis case.