Muslim Women in the Push for Peace 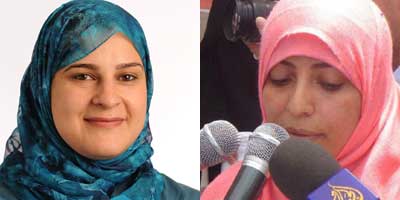 With the anniversary of 9/11 fast approaching and the awareness that terrorism is still a real threat for the United States, we should consider what we might do differently to make our country a safer place.

Looking back on the last 10 years, one thing is clear: the violence of terrorism cannot be defeated with more violence. Afghanistan and Iraq are convincing proof of that; both countries remain ravaged by terrorism and al Qaeda forces seem much more resilient than the architect of the war on terror, George W. Bush, ever imagined.

Faced with such realities, what other ways can we think of to address the problem of extremism, if not in the world, then at least at home?

Given the limitations of conventional approaches, I think we might do well to think unconventionally and take a radical untaken step: recruit Muslim women.

As Americans, we're used to thinking about Muslim women in various unflattering ways. The most common idea of a Muslim woman, for example, is that of the oppressed victim of Islam. In this manifestation, we usually find a veiled, silent woman imprisoned by her religion and policed by Muslim men. Passively waiting for her rescue, this tradition-bound woman draws significant American attention, if only to remind us how lucky we are to be Americans.

If America could see beyond the media

But if Americans could see beyond the media, or at least see a media willing to highlight the truth about the Muslim world, then we would find that women of the Islamic hue are far from passive or silent. In fact, just a glimpse beyond the surface of American media stereotypes reveals that there are some pretty heroic Muslim women in the world doing some pretty amazing things, especially in the cause for peace.

Tawakul KarmanTake, for example, one of Yemen's most visible and active women today: Tawakul Karman. A 32-year-old mother of three, Karman is both a journalist and human rights activist active in the push for the right to free expression. A devout Muslim, Karman was inspired by the uprisings in Tunisia and Egypt and is now at the forefront of the effort to challenge Yemen's authoritarian leader, Ali Abdullah Saleh.

Beyond her work as a human rights activist, Karman supports alienated Yemeni youth, is a member of Yemen's leading Islamic political party and hosts weekly sit-ins in support of political prisoners.

Manal OmarAnother example is Manal Omar. Currently the director of Iraq, Iran and North Africa programs from the United States Institute of Peace, Omar has a long record of promoting the rights of Muslim women and working to address humanitarian crises for organizations including Oxfam Great Britain and Women for Women International. In addition to her tenure with UNESCO, Omar worked for three years with the World Bank's development group conducting training groups in Yemen, Bahrain, Afghanistan and several Muslim-majority countries.

More recently, Omar's CV boasts a book, "Barefoot in Baghdad," reflecting her time in Iraq working with Muslim women and witnessing their brave stance against the injustices of life under siege.

Karman and Omar are not alone. Throughout the Muslim world (including America), Muslim women are playing a major role in the promotion of justice, freedom and equality for their communities and countries. Indeed, efforts like the Arab Spring suggest that women are not passively waiting to be rescued. On the contrary, they seem to be quite busy planning their own salvation.

What Karman and Omar show is that, far from the clichés of American media, Muslim women matter. And they matter precisely because they've refused to be irrelevant. But Karman and Omar offer much more than a counter to the stereotypes of American media. They provide compelling evidence of a vibrant segment of the Muslim population that is unwilling to surrender in the face of violence and terror.

What can America learn

So what can America learn from these women and others like them? One basic lesson is that Muslim women are important players in their communities. Women like Karman and Omar didn't just happen. Rather, they reflect a tradition -- one often ignored -- of women's participation in their communities. If we look beyond the western idea of masculine leadership, we can begin to see that women are active leaders: as mothers, teachers, scholars, counselors and, as Ingrid Matson has shown, presidents of national organizations. With such dynamic points of access to Muslim communities, it seems that ignoring women in the grassroots fight against extremism in the U.S. would be a grave mistake.

Another point we can take from Karman and Omar is that women often choose the path of peace. Leaders like Karman and Omar know first-hand the impact of violence on society and see the need to struggle for peace in definitively nonviolent terms. They understand that peace is not the end point of violent conflict; rather, they see that peace is the consequence of a just social order. And thus they promote empowering forms of nonviolent resistance like sit-ins and human rights campaigns and, more importantly, institutional development. What Karman and Omar are doing is not just fighting; they are building. And what better way to reduce extremism in America than to establish new institutions that give voice to communities that want to be heard and are willing to work for positive forms of change.