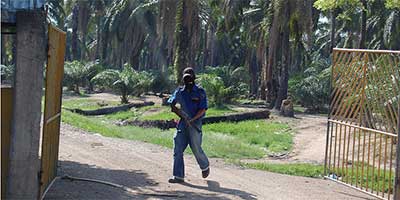 The activists were on a solidarity tour organized by the Chicago-based La Voz de la Abajo organization, which is investigating human rights violations and the social and political conditions in the country, including its dubious distinction of having the world's highest murder rate.

At the time of the incident, the La Voz delegation was investigating a combined raid by over 500 private security, national police and army on Sept. 9 which killed Hector Navarro, aged 69. The raid was part of the violent eviction of a campesino group from land claimed by big land owner Miguel Facusse on the Los Laureles plantation.

Witnesses from the surrounding neighborhood told the delegation that the armed men ordered them to go into their houses during the raid. They then fired tear gas cannisters into the homes and broke down doors looking for any campesinos who may have fled into some of the homes. There were 34 people arrested, including many youth. Early the next morning, Navarro, who had been resting in a hammock in his backyard, died of apparent excessive tear gas inhalation.

During the incident, as the La Voz delegation was standing well outside the plantation land waiting to interview more neighbors, five masked guards approached, some pointing their weapons at the La Voz delegation. They shouted threats and one guard said, "This is your last warning," and then fired a rifle.

"That we were not shot at directly is probably only because most of us appear to be North Americans," said Vicki Cervantes, co-coordinator of the La Voz delegation. "Hondurans don't have that same protection, which explains the rampant political violence in this country."

"Today we visited three campesino encampments in Aguan and people at each of them emphatically requested that we stop U.S. aid to the Honduran military and police," said Alexy Lanza, another co-coordinator of the La Voz delegation. "Yesterday at the Garifuna land encampment in Vallecito we learned of the murder the same day of Aguan campesinos Herman Alejandro Maldonado and Ivis Ortega (Ortega was gravely wounded, and lingered before dying this morning). 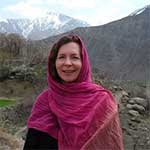 Human Rights Activist Mary DeanAfter the shooting incident at Los Laureles, the delegation filed a formal complaint against the security guards at the police station in Tocoa. Delegation member Sarah Sommers of the Cleveland InterReligious Task Force on Central America stated that one of the police officials who took the complaint, Wilfredo Bautista, who is in charge of investigating murders in the Aguan Valley, told the delegation, "that even we [the police] can't go into that plantation; there [sic] are very bad people. We can't investigate because we can't go there; we might get killed."

"It is disturbingly clear who is in charge in the Aguan," said Cervantes. "Police and military carry out raids on behalf of the big landowners like Miguel Facusse and essentially say that they can't control heavily armed private guards who shoot and kill at will."

Besides Cervantes, Lanza and Sommers, members of the La Voz delegation include Lois Martin, Tucson and a member of No Mas Muertes, an organization dedicated to preventing the deaths of migrants crossing the deserts in the border region; Sidney Hollander, an activist with the Chicago Religious Leadership Network on Latin America; human rights activists Mary Dean and Greg McCain, formerly of Chicago and now of Colon, Honduras; and Andy Thayer, a Chicago-based anti-war activist and co-founder of the Gay Liberation Network.