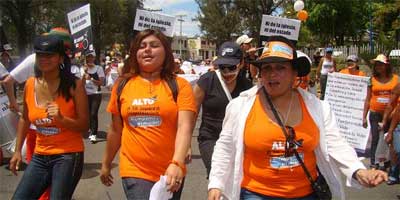 Honduras is poised to pass a law making it a crime for women to use the emergency contraceptive pill and for doctors to prescribe it, a local women’s rights group has said.

In February, the Supreme Court in Honduras upheld a decree imposing a blanket ban on the sale and use of emergency contraception, even for rape survivors, paving the way for lawmakers to develop laws to enforce the ban.

These laws, if passed, could see women jailed for up to six years, making the Central American nation one of the few countries in the world where women and girls can be prosecuted for using emergency contraception, also known as the morning-after pill.

This is depsite the fact that, in 2009, women's rights activists succeeded in persuading President Zelaya that the bill violated women’s human rights.

“It’s almost a done deal that congress will pass this law criminalising emergency contraception,” said Gabriela Diaz, head of reproductive rights at the Centre for Women's Rights in Honduras.

Lawmakers in Honduras could vote on the issue any day, she added.

“There is no schedule and or timetable for when this law will be debated. It could happen at any time,” Diaz told TrustLaw, in a telephone interview from the Honduran capital Tegucigalpa.

In Honduras, abortion is banned under any circumstances, including cases of rape, incest or if the life of the mother or foetus is in danger.

The country’s supreme court ruled that the emergency contraceptive pill was a method of early abortion and therefore illegal.

This decision goes against the views of leading global health bodies, including the World Health Organisation and the Pan-American Health Organisation, which say the emergency contraceptive pill is not a form of abortion because it prevents sperm from fertilizing the egg.

“Taking away the right to emergency contraception means women who have been raped will be left with no choice but to go through with the pregnancy and give birth even if they don’t want to.” Diaz said.

“In Honduras, there are no options for women with unwanted pregnancies if emergency contraception is denied. Women here can’t decide if, when and how many children they want,” she added.

“In the government there are conservatives and members of the ultra-conservative Catholic Opus Dei movement, who have pushed for bans on abortion and emergency contraception,” Diaz said.

Honduras has the highest rate of teenage pregnancy in Central America, and the possible ban on emergency contraception would only lead to more unwanted pregnancies, rights groups say.

“It’s a terrible situation women face in a country where there is no education on women’s productive rights and sex education. We have very high teenage pregnancy rates, which will only get worse. It’s a complete assault on human rights and the reproductive rights of women,.”