YEMEN: Let us also be reminded of our humanity 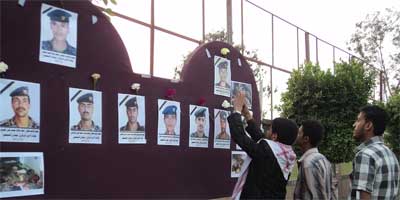 People decorated the photos of the deceased with flowers, followed by a candle light vigil, and a recitation of the Qur'an.

At least 96 people were killed and 220 were wounded in a suicide bomb attack on a military parade in the Yemeni capital Sanaa. The bomber, who was dressed in military uniform, blew himself up in the middle of the battalion of soldiers as they were rehearsing for a parade the following day.

On May 28th a candelit vigil was held in their memory.

"You must not lose faith in humanity. Humanity is an ocean; if a few drops of the ocean are dirty, the ocean does not become dirty." Mahatma Gandhi

A candlelight vigil was organized today to commemorate the deadliest suicide attack in Sana'a that killed 96 soldiers and wounded 300.

People decorated the photos of the deceased with flowers, followed by a candle light vigil, and a recitation of the Qur'an.

While participating today, I had many mixed feelings. On the one hand, I was never fond of security and military officials because I often think of them as perpetrators of violence, not as protectors of citizens.  This is because security and military officials have engaged in many atrocities throughout the country, including torture, killing, and illegal imprisonment of innocent civilians especially during the revolution, the six wars in Saada, and  the civil war in the South.

Yet, I felt attending this vigil was the right thing to do.  While I have my issues with the Yemeni military, I can not rejoice over anyone's death.

Seeing the photos of the young deceased soldiers, humbled me and reminded me that nothing is pure evil or pure good.  Many of them were not as privileged as I was to choose what kind of life to lead, and what kind of a career to seek.  Their environment and upbringing dictated how their life will be.  A soldier's salary can barely support a family, and their work conditions are terrible.

It is probably this thought that pushed many to recognize the soldiers' humanity and the atrocity of the crime.  Even people who were directly affected by previous attacks by government officials were present at the vigil.

I had to fight off tears, and suffer that lump in my throat in order not to cry when I saw peaceful protesters placing flowers on posters of the deceased soldiers.

Not only did they join, but it was them who organized this campaign, brought the flowers, and the candles. It was very ironic for them to organize the vigil in the same place that was closed off for almost a year due to "security reasons" and fear that peaceful protesters would march there to take over the Presidential palace.

Despite the fact that hundreds were killed and thousands wounded during the revolution by government and security personnel, activists were there to pay their respects and condemn violence.

But today was not about killing.  It was a time of mourning for death itself.  A time to say enough killing.

Seeing the people come together like this, shows that "revenge" is not inherent in our culture.  What we saw today, was the spirit of a shared humanity.  Only through love and compassion can life exist.