In Syria: The Loss of A Last Refuge for Iraqi's 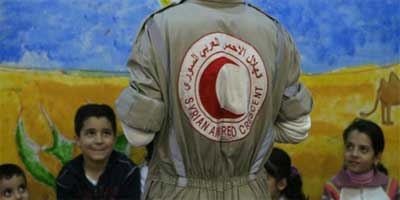 In 2008, Iraqi activist and journalist Hana Ibrahim fled from her home in Baghdad to Damascus, taking her two children with her.

They had grown up under sanctions and war, and had as such never enjoyed the level of security they found in Syria. But even that has become a thing of the past.

“For years my daughter couldn’t go out alone, because the streets had become too dangerous for girls especially. In Damascus, she felt free to do as she pleased,” said Ibrahim. “In Iraq, we had grown used to electricity cuts. Once in Syria, my children were surprised we had power round the clock. In general, life was much better for us here.”

But one year on from the start of the uprising, life in Syria has changed dramatically for Syrians and non-Syrians living there. Many face a worsening security situation, disruptions to social services, increased impoverishment, and uncertainty in the face of the future.

Starting in 2003, thousands of Iraqis started to flee their homes in search of refuge in neighboring countries, mainly Syria and Jordan. As violence and targeted killings, in particular of the Iraqi middle class, came to a head in 2006 and 2007, the number of refugees in Syria exploded to over one million, according to Syrian regime and Iraqi estimates. At more than twice the number of Palestinian refugees in Syria, the Iraqi community became the largest refugee community in the country.

But the majority of Iraqi refugees in Syria did not register with the UN. According to Souad al-Azzawi, an Iraqi environmental engineer, human rights activist, and herself a refugee, many of those who failed to register chose to lie low because they “sensed danger in handing over their personal information to the UNHCR. Some had been illegally detained by US occupation forces, or kidnapped, or feared assassination” by pro-Iran militias infiltrating the Iraqi-Syrian border, she said.

Though UNHCR’s figures represent only a small minority of the total, they are revealing of the extent of Iraqis’ socio-economic vulnerability, even in the state where they once received the highest relative level of protection. At the end of December 2011, the number of registered Iraqis stood at 101,905. In total, 92.9 percent of registered refugees and asylum seekers in the country were Iraqi. More than 65 percent of the registered Iraqis came from the region of Baghdad alone, according to UNHCR figures, while 35.7 percent of the 31,245 registered families were female-headed. Significantly, 38.4 percent of the registered population were identified as having “special needs” and requiring “targeted support.”

With reported death tolls in the thousands since the uprising began in March last year, Iraqis in Syria have generally not been turned into targets of violence as such, according to UNHCR spokesperson in Damascus Helene Daubelcour.

Still, one Iraqi woman was reported killed in December 2011 in the Zabadani district of Reef Damascus province, raising fears among Iraqi activists that more violence could follow as the Syrian crisis continued to deteriorate. Several others, said Daubelcour, have been injured. “But there are no indications that they were deliberately targeted for being Iraqi,” said Daubelcour.

Gaps in protection for vulnerable Iraqis are clearest in a number of other areas. One of the key concerns for refugees today, according to al-Azzawi is their heightened economic vulnerability. “Most refugees are not allowed to work,” al-Azzawi said. With most Iraqis in Syria suffering exile for several years, “they have long spent all their savings from selling their homes in Iraq and other personal belongings, just in order to start small businesses to try and survive.”

Today, a deteriorating Syrian economy and security situation have meant that “many of the Iraqis’ small businesses have either already closed down, or are about to be forced shut. Though many of the refugees have a high level of education, they have no other means of survival,” said al-Azzawi. “How will they pay their rent? How will they pay their bills? How can they survive this disaster? I don’t know.”

Daubelcour added that there has been an increase in rent prices in numerous areas of Syria, as a result of the displacement of Syrian families from hotspots of violence in search of safety. “Over 40 percent of Iraqi refugees interviewed by UNHCR reported that their income had been negatively affected in recent months,” she said.

Meanwhile, though Syria became the first Arab state to offer free education to Iraqi children – regardless of whether their families were registered refugees – they too have suffered as a consequence of increasing violence. Thousands of Iraqi children, said al-Azzawi, have suffered setbacks to their education because attendance levels have fallen as a result of increased insecurity.

“These children have the additional burden of suffering for the second time in recent memory,” she said, pointing out the psychological toll of displacement, which is often especially traumatic for the young. “They left as a result of the American invasion of Iraq, and have already had to deal with rebuilding their lives once. While in Iraq, some of them had lost friends, others had lost family members. Now, they have to face uncertainty once again. The situation of refugee children is very sad indeed.”

For Most Iraqis, There is Nowhere to Go

Though it is impossible to estimate the total number of people that have voluntary returned home, a worsening security situation in Iraq in recent months has only given refugees new reasons to stay away from their country. If statistics for registered refugees serves as any guide, in 2011 the number of Iraqi registered refugees returning to their country rose from 2010 by six times, said Daubelcour. “But still the number of returnees who went back to Iraqi with the assistance of UNHCR was low, at 1,250 in comparison to 192 in 2010,” she said. An additional 3,677 Iraqis returned home in 2011, without UN assistance, UNHCR figures show.

Meanwhile the majority of Iraqi refugees in Syria appear to have little choice but to remain where they are. They have been blocked from entering neighboring countries such as Jordan and Lebanon unless they have a visa, which is difficult to get without money or political contacts, said al-Azzawi.

Many Iraqis who registered with UNHCR in Syria did so in the hope that they could be resettled to third countries. “For the majority of Iraqi refugees, Syria is not a country of settlement,” said Ibrahim. “Most came here in hope they could either return home when the situation improved, or that they could go and resettle in another country.”

Since 2007, almost 28,000 Iraqis have been resettled from Syria to third countries. Two-thirds of successful resettlement cases, according to UNHCR figures, involved Iraqi refugees moving to the US and Canada. However, the recent closure of the US and Canadian diplomatic missions in Damascus meant that “applications for resettlement to these to countries have been put on hold,” said Daubelcour. “This has meant a new level of psychological pressure for refugees.”

The majority’s lack of better options has made Iraqis like Ibrahim face the future with a sad mixture of solidarity, pure resilience, and fatalism. She believes that, although things were somewhat better for Iraqis refugees just over a year ago, the deterioration of conditions of life for people in Syria as a whole “might just show the direction in which the whole Arab world is heading. We are worried about Syria. As for us, wherever we go, things won’t be much better. So we choose to stay,” she said.