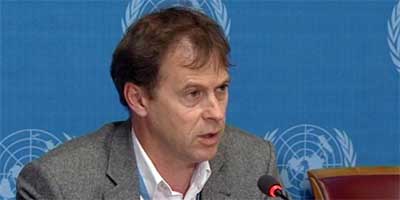 “We are deeply troubled by reports of irregularities in her detention and trial, including that no lawyer was present to assist her in key stages of her interrogation and trial, that language interpretation was poor, and Ms. Nafeek's contention that she was physically assaulted and forced to sign a confession under duress,” Rupert Colville, a spokesperson for the Office of the UN High Commissioner for Human Rights (OHCHR), told a news briefing in Geneva.

Ms. Nafeek, who arrived in Saudi Arabia from Sri Lanka to work as a housemaid in 2005, was charged with the murder of her employers' baby a week after her arrival. She was executed on Wednesday.

“Despite a birth certificate that allegedly showed she was a minor at the time of the baby's death and repeated expressions of concern from the international community, she was convicted of murder, sentenced to death and beheaded,” Mr. Colville noted.

In November 2010, the Special Rapporteur on extrajudicial, summary or arbitrary executions, Christof Heyns, sent an urgent appeal in connection with Ms. Nafeek's case. In June 2007, his predecessor, Philip Alston, had raised concerns about the imposition of the death penalty for an alleged crime committed when Ms. Nafeek was still below eighteen years of age.

Independent experts, or special rapporteurs such as Mr. Heyns and Mr. Alston, are appointed by the Geneva-based Human Rights Council to examine and report back on a country situation or a specific human rights theme. The positions are honorary and the experts are not UN staff, nor are they paid for their work.

The spokesperson also noted that the High Commissioner – Navi Pillay – strongly supports the global movement away from the death penalty, and was pleased that a clear majority of UN Member States had recently voted for a General Assembly resolution which calls for a moratorium on the death penalty.

On 21 November last year, the Assembly adopted the non-binding resolution by a recorded vote of 111 in favour to 41 against, with 34 abstentions. In it, the Assembly expressed its deep concern about the application of the death penalty, and called on States to respect international standards providing safeguards guaranteeing the protection of the rights of persons facing the death penalty.

States were called on to not impose capital punishment for offences committed by persons below 18 years of age and pregnant women, as well as urged to reduce the number of offences for which the death penalty might be imposed and establish a moratorium on executions with a view to abolishing the death penalty.