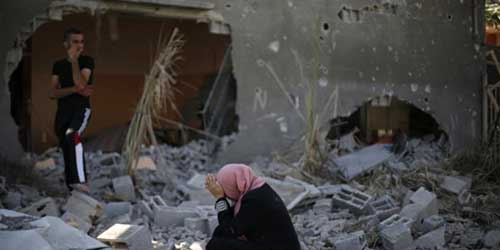 A Palestinian woman reacts upon seeing her destroyed house in Beit Hanoun town, which witnesses said was heavily hit by Israeli shelling and air strikes during an Israeli offensive, in the northern Gaza Strip August 1, 2014. REUTERS/Suhaib Salem

It was not the wedding party venue Riyad Fayad had planned for his daughter Heba, but with his Gaza home damaged and neighbourhood in rubble, a shelter seemed like the only option.

The United Nations refugee centre in a Gaza City school has become a temporary home for thousands of Palestinians displaced by the month-long war with Israel, many of them from Fayad's town of Beit Hanoun in the north.

They sleep on mattresses on classroom floors in the large school house, where lines of washing hang from the windows. Those without a room have made shelters in the playground from wooden desks and blankets.

The 47-year-old father of the bride said he wanted to give his community something to celebrate and picked the school as the venue for Heba's henna party, a pre-wedding ritual in which female guests decorate their hands with the temporary dye.

"Despite the bombing of our houses and the destruction, we are looking forward, to life," Riyad said in the playground while waiting for his daughter to arrive.

Minutes later, children from the camp whooped and sprinted to the school gates. Heba, enveloped in a long black abaya robe and full face veil, arrived for her party in a U.N. car, greeted by the crowd like a movie star.

People from the family's hometown of Beit Hanoun, on the border with Israel, are trying to put their lives back together after a war which has killed nearly 2,000 across the Gaza Strip.

Those who can return to neighbourhoods with patchy electricity, sweeping aside the rubble. Others like the Fayads are trying to make refugee centres a home from home, sleeping there and travelling back and forth to the town for belongings.

According to the United Nations, at least 425,000 displaced people in the Gaza Strip are in emergency shelters or staying with host families. Nearly 12,000 homes have been destroyed or severely damaged by Israeli attacks.

In Beit Hanoun, where 91 people were killed during the conflict, around 70 percent of homes are uninhabitable, the head of the town's municipal council Mohammad Nazeq al-Kafarna said.

The town was the site of "moderate resistance", he said, "but the Israeli reaction was out of proportion." The council estimates the damage to municipal buildings alone at $500,000.

Israel says militants used Beit Hanoun, a town with population of 30,000, and other residential areas in the Gaza Strip as launching sites for cross-border rocket attacks.

Israel says 64 of its soldiers and three civilians were killed in the war which erupted on July 8 after a surge in rockets fired towards its cities from Gaza.

A new, five-day ceasefire is due to expire late on Monday, with talks in Cairo on ending the war still inconclusive.

Severed electricity cables lie in Beit Hanoun's main streets. Every other building has parts blown off or is pock-marked with bullet holes, while in the most damaged areas, whole rows of buildings have been deleted from the skyline.

All of the town's seven wells were damaged during the fighting. Four are now working again and are being supplemented with water tanks supplied by aid groups.

The municipal council now wants to survey the damage and finish clearing the streets from rubble so that there is access to all parts of town. In the last conflict in 2012, only around 150 homes were destroyed on the town's outskirts.

Some traders are slowly returning to Beit Hanoun, where around three-quarters of people are labourers or craftsmen.

Baker Jihad al-Za'aneen has been back at work at Beit Hanoun's only bakery for one day. He is running at half production because fuelling the newly-repaired generator for a full day is too expensive. In any case, his sales are not currently covering his costs.

"Before now there were no ingredients and now my production is negative," he said.

Across the road, Khalil al-Zaini, a 25-year-old unemployed graduate, has spent his first night back home, sleeping on the ground floor of his extended family's four-storey house.

Part of the building has been destroyed and they have no electricity, running water or roof, but the family wanted to come home.

"We are peaceful people, we don't work with the resistance," Zaini said

Most of his family of 16 has returned and spent the night on thin mattresses on the ground floor, avoiding the upper levels which are covered in concrete rubble and twisted metal.

Zaini says he is not sure how he will be able to reconstruct his apartment, which he originally paid for after the family sold some of his wife's gold. They have no savings left. "If I get compensation, maybe, but without it, it is not possible."