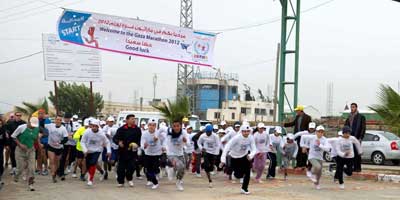 The third annual Gaza Marathon, scheduled for April 10, 2013 has been cancelled according to an announcement by the Palestinian agency of UNRWA (United Nations Relief Works Agency) made March 5, 2013.

It states that the authorities in Gaza have barred women from participating in the event, in which women had run alongside men in previous years, to raise money for the agency which helps refugees in Gaza, The West Bank and neighbouring Arab States. UNRWA is currently suffering from a 66 million dollar budget shortfall and has relied on the Gaza marathon to draw awareness to its campaign needs.

Despite objections, the ruling Islamic authority since 2007, Hamas, decided that stricter enforcements were required in the region and that women were not to take part “under any circumstances”.

Some Palestinian Activists feels that this incident may an indication of how Hamas views women and what role they should play in society.

"Gaza's women need to raise their voices against this" says Mona Shawa, Women’s Rights Advocate at Palestinian Centre for Human Rights. Other human rights organizations encouraged UNRWA to hold the marathon as Hamas has no right to discriminate against women.

Another 1600 children (boys and girls) would have been running the race.

Those participants most often wore long-sleeved shirts and some even wear headscarves.

They are attired very modestly in consideration of the conservative society in which they live.

Girls were not banned from the race and Hamas cabinet secretary Abdessalam Siyyam, would not comment on why women were previously allowed to participate.

“We did not tell UN Relief Works Agency to cancel the marathon and we haven’t prevented it, but we laid down some conditions: We don’t want women and men mixing in the same place” he said.

This situation leaves women more isolated and restricted not only in movement but in ability to contribute to any socio-political activity.

The decision to cancel the marathon takes away the women’s choice to be involved in athletics publicly.

Separating the genders may not not be a solution because one of the main objections is of women running in the streets.

Nader Masri, who represented Palestine in the Beijing Olympics in 2008 said that Gaza’s strict cultural impositions and conservative traditions make it difficult for women to run in public. “Who would allow his daughter or sister to run in the street? When a girl of 16 or 17 is running in the street, that’s not acceptable.”

Noura Shukri, a high-school student who participated in both 2011 and 2012 marathons explained that going against cultural practices might also have adverse effects at the community level. “My Dad told me that I’m a pretty woman now, and not a girl anymore, so I can’t run in the streets. It will be a headache for him because people will gossip.”

These opinions prevents the mobility and accessibility to services for women and creates further barriers for organizations who may be struggling to find opportunity to campaign for Gaza’s needs.

Moreover, it reduces the sense of normalcy of such events in an area that had recently been hard hit with tragedy and strive.

It has not only disappointed the runners who have trained and looked forward to an event to draw much positive attention to the cause of rebuilding Gaza after so much infrastructure was destroyed- including athletic facilities.

The marathon was to be an opportunity to showcase hope, passion, resilience and athleticism of Palestinians.

Sixteen year-old Ayman Abdullah, who ran in last year’s race, admitted her deep disappointment, “It was an expression of freedom and showed that we in Gaza are a civilised people”.

Just today, it was announced that the West Bank would be hosting its’ first marathon in the city of Bethlehem. The marathon aptly named: Right to Movement Palestine Marathon will be held on April 21, 2013.The West Bank is under Palestinian control not Hamas, who stated they honour women’s right to participate. Practices for this event have already begun.

Hopefully next year, there can be reasonable accommodation from Hamas authorities to allow women to run in Gaza.

So they too, can exercise freedom of movement. 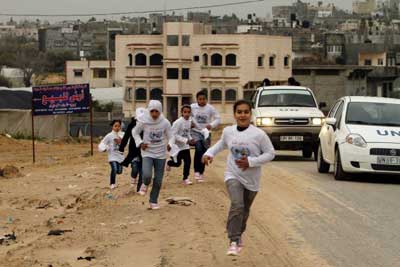 Also by Shireen Ahmed: A Dangerous Game for Women: Football and Corrective Rape