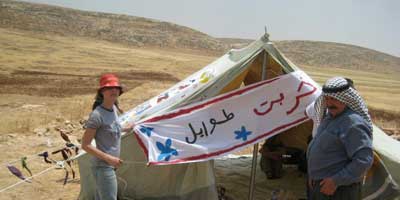 Peace Movement Activists Erect Guest Tent in Front of Mosque in Palestine, in a Village Designated for Demolition

By Irit Hakim, Safe World's Israel Correspondent, Member of Combatants for Peace. May 2012.

Huts and Tents Due for Demolition

The Tel Aviv Nablus (TA-Nablus) Group of the bi-national movement, Combatants for Peace, recently held a morning activity at Khirbet al-Tawil, a village in which all its residential means – mostly huts and tents, were issued with eviction notices due to demolition.

Khirbet al-Tawil is about an hour or a bit more out of Tel Aviv.  Khirbet al-Tawil is a Palestinian village, in Nablus area, toward the Jordan Valley; we traveled in people's private cars to reach it. The area is permitted for Israelis to visit, and for them, no papers are needed to go there and back. 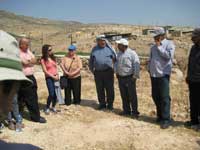 It was our third activity at this place.

Previously, the first meeting was an introduction, and trying to find out the needs of the village.

For the second activity, we went out to their lands and learned about the area around it, making some plans, i.e., the tent.

We decided to erect a tent in the open, in front of the village mosque.

This was a courageous step, and as such, a debate was stirred by the villagers, who feared the reaction of the army and administration – and the fact that it would be a provocation that might only worsen the situation and expedite the process of demolition.

We had in mind that the IDF might come. but then, as a non violent movement, when and if they came while we were gathering together, we would go away – but not before expressing what we stand for.

Women and Children Help Build a Tent with Joy

We divided into two groups based on gender. In the Nablus area –  and specifically at Tawil, they do not mix the company of men and women together. So, while the men set up the tent, we women and children were painting sheets to hang on the tent’s flaps later on. 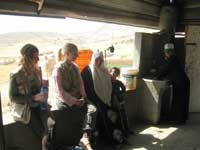 It was a very happy hour with the Palestinian family, at their home, where we stayed just for an hour or a bit more, to make the tent decorations, and involved them in sharing some of the project. The women in the rural area are not involved in any "out of house" events. They go out to perform daily tasks, gardening, sheep grazing, etc., but not politics.

Three-language conversations, in Hebrew, Arabic, and English, had been heard and spoken, with much laughter, and a splendid mood among all who were present. 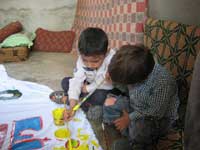 We had been all women there at the their home, with some young boys (3-11 years of age).

We spread two white sheets on the floor, and painted them with acrylic paints which we brought with us.  The women offered sweet salvia tea; the children did much of the painting and wrote in Arabic: - 'Peace' and 'Welcome'. 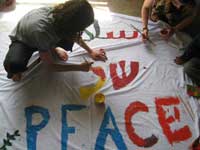 We wrote 'Peace' and 'Welcome' in Hebrew and also in English.

Later, after the construction work was finished, the decorations were hung on the tent’s flaps; that's what had actually gave it its identity – as a Guests' Tent, a Tent of Peace. We spent some time in it. It can hold a lot of people!

We had a brief summary of the day, while eating hummus and falafel, with pita bread, and planned the next activity. 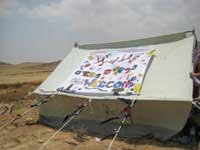 The TA-Nablus Group is going to continue to support the villagers of Khirbet al-Tawil, to answer their needs. For now, our goal  is to try to cancel the demolition order by law. We have an attorney in our group.

We meet with them once a month, unless there is a need for more meetings.

Our hope is that the tent will remain standing for a long time.

On our way back home, we stopped to correct an injustice we had noticed on the way to Tawil: on a large, square stone there was abusive graffiti against Palestinians.

We still had enough paint left and so covered up the offensive graffiti.

About Combatants for Peace

The Combatants for Peace movement is a bi-national movement of Israelis and Palestinians who lead a non-violent struggle against the occupation, and support a peaceful solution of two states for the two peoples: Israeli and Palestinian.

The movement was formed in 2005 by Palestinians and Israelis who had taken an active role in the cycle of violence, and decided to drop their arms and work together to promote a peaceful solution through dialogue and non-violent action. Originally, the activists on both sides were solely ex-combatants: the Israelis as soldiers in the Israeli army (Israel Defence Force - IDF) and the Palestinians as participants in the violent struggle for Palestinian freedom.

Today, members of the movement include also men and women who have never taken an active role in the violent struggle in the area.