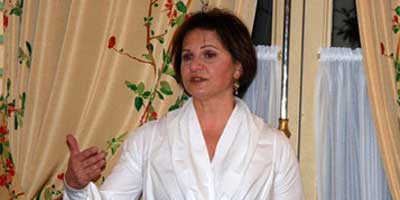 On the 20th January 2011, three leading women peace activists came together to discuss women's involvement in the peace process:

“What would be different if the Peace Process was run by women?”

Integrating Women in the Peace Process

Irit Hakim attended the conference, which was held by the Israeli-Palestinian Centre for Research and Information (IPCRI) at the Ambassador Hotel in Jerusalem.

“To gain more power, women can achieve solidarity with women from all over the world.· That is the real power.”

Ambassador Khoury is very frustrated by the peace process.

In her opinion, the Israelis are clearer than the Palestinians in their convictions in the process, but she is frustrated with the Israeli government who fails in its promises.

Not all of the blame for this falls with the Israelis, she says, and directs some of her frustration towards the interventions of the Americans in the process.

Her opinions are a mixture of feminism, conservatism, and independence, and she feels strongly that the main power that women have at present is based around the home.

Women's Solidarity Around the World is Real Power

Until now, the question, “What would be different if the Peace Process was run by women?” is hypothetical in her view, especially as far as Palestine is concerned, because Palestinian women have not been allowed to lead any process.

She is hopeful that this might be changed through the increasing globalisation of the world and the influence of the media.

“To gain more power, women can achieve solidarity with women from all over the world. That is the real power.”

Ambassador Khoury doesn’t see many differences between men and women except in the political arena.

"Women are not corrupted yet by politics and that is why the stereotypical woman is still 'present and correct'" (accepted by society).

Ambassador Khoury urges women to get up and take part in this arena to change the situation. The need is urgent, she says, because events are happening fast.

Women must believe that they can influence decisions.

Researcher at the Interdisciplinary Center, Herzliya. 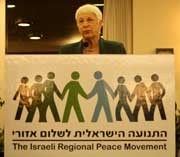 "Instead of walls and borders, they could talk of parks and shared living areas...At the negotiation table, women could use their empathy traits."

“The biggest difference between men and women is the attitude and the approach to a subject such as peace” said Professor Golan.

Her reserch has convinced her that there is a fundamental difference in the way that women approach the peace process.

She says that women's active contribution is vital to bring about a resolutin and lasting peace.

Presently there are 24 women in the Israeli Kenesset, but, says Professor Golan, most of them do not "act as women and do not make feminist subjects their priorities."

The question, "Where are the women?" is always in the air because no one sees them.

"The media hides stories of politically active women to ensure that their male counterparts get all the fame. Those men feel threatened by strong women."

Professor Golan has discovered that when women reach the negotiation table, they tend to adopt a male perspective and actions because they think they must behave like men do in order to succeed, or to be accepted.

Women are adopting a 'tough man's' attitude, because they fear that if they are 'softer' they will not be heard.

At the negotiation table, women could use their empathy traits to listen more attentively.

Women tend to be more realistic, with their feet firmly planted on the ground. Hence practical issues such as everyday security for people, human rights, reconciliation, and human security arrangements would be spoken about more.

Women are more likely to tackle such issues.

Instead of walls and borders, they could talk of parks and shared living areas.

Professor Golan believes that, if women stayed 'loyal to themselves' and allowed their in-built tendencies of empathy and cooperation to come to the fore, it would result in a new means of negotiation.

Points of view offered by women during a peace negotiation process will, in general, be different to those offered by men.

The actions taken by women will also tend to be different to those taken by men.

Women would change the agenda, if not the process.

Russian-born journalist, Ms Svetlova believes that the entire peace process is stuck and is waiting for new power to be injected into it.

She hopes that this is the chance for women to take part.

It's Time for Women to Take Part

"Women have stronger communication skills and more qualifications than their male peers in media."

She cited two different women journalists, as fine examples of what can be achieved by women in the media.

Caremela Manashe is a military reporter on Israeli Defence Force issues and war, and Amira Hass is a prominent journalist giving reports on both Peace and Conflict in the Middle Eastern region.

Women are capable of so much power, but they choose not to use it.

A Palestinian women has her priorities firstly in her home. There she is powerful and dominant.

It is said that if women were leading the world, there wouldn't be wars but Ksenia doesn't think so. However, she says that women would take different directions when negotiating for peace.

"Thanks to women, more feminist subjects are on the table: women's rights, elimination of violence against women, and more."

As more women’s organisations develop, so does the awareness of the world about women and violence.

In Ksenia’s words:“Women negotiate, while men spend time in the army and give orders”.