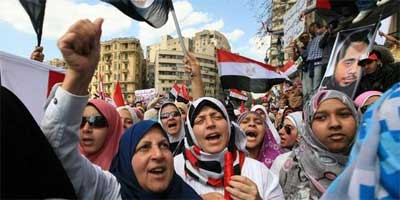 A MASSIVE rally by Egyptian women last week that followed earlier, violent and degrading treatment by security forces, represents only part of the fury and apprehension felt by many women in the region.

The swing towards Islamism in the Arab Spring is deeply disturbing for liberal Egyptian women who see the country's election captured by religious parties that could strangle women's rights.

First-round reports indicate a landslide to the Muslim Brotherhood's Freedom and Justice Party and the Salafist Nour Party, while the secular Facebook freedom fighters who triggered and personified the uprising were decimated.

These results are consistent with a Pew poll last December that showed 85 per cent of Egyptian Muslims embraced Islam's influence in politics.

Regional elections are hindered by weak civil societies and non-representative electoral systems. The political landscape is also a battleground scarred with the competing ideologies of Arab nationalism, nascent democratic liberalism and Islamism, or political Islam, bolstered by decades of Iranian and petrodollar funding for export of radical ideology.

So far, the Arab Spring has not yielded reforms that promote women's rights. In Egypt, women were not invited to join a committee preparing amendments to the constitution, and many who rallied in Tahrir Square to celebrate International Women's Day in March were subjected by soldiers to humiliating "virginity tests".

In Tunisia, the most liberal Arab state before the uprising, Islamists protested violently against a ban on enrolments of veiled women in college and also against the "blasphemous" animated film Persepolis, previously shown at a 2008 Tunisian film festival without causing concern.

In October, Libya's National Transition Committee proclaimed its goal to institute discriminatory religious laws, including polygamy. The Justice and Development Party, allied to the Muslim Brotherhood, was recently elected in Morocco, and the main opposition Islamist group in Yemen could take power. Women's rights are also threatened in Afghanistan, where the drawdown of coalition troops could empower the Taliban. Muslim women who believe revolutionary change can reduce or abolish endemic patriarchy should be reminded that most regional uprisings have moved in a retrograde direction and betrayedwomen's rights.

During Algeria's war of independence from the French (1954-62), women fought together with men in themountains and were led to believe they could expect full emancipation. However, most men did not support gender equality and many compatriot wives were later divorced in favour of younger, "more presentable" women in the city.

After an Islamist president was put forward in 1978, Islam was made the state religion. The constitution, which upheld equal gender rights, was suspended, and men rewrote inheritance and divorce laws in their own favour. Guardianship laws gave husbands and male relatives control over women and forbade them to travel without a chaperone. Women also became the main victims in the Algerian Civil War, after the Islamic Salvation Front won the first round of elections and the army cancelled the second round to prevent emergence of a theocratic state similar to Iran. In the ensuing civil conflict, about 200,000 lives were lost, the vast majority women and children. Kidnapping and gang rape were common, and unveiled women were deemed military targets.

In Iran, women across the political and religious spectrum joined with men to oust the shah. The revolutionary government of Ruhollah Khomeini that took power in 1979 promised new freedom, but instead it established clerical rule and discriminatory laws, including religious family law, the mandatory hijab and removal of female judges. Iranian women believed discriminatory laws would be reformed when they elected president Mohammad Khatami in 1997, but they were sorely disappointed.

Although committed to human rights, the present US administration has not assisted Egypt's Christian Orthodox Copts, who have faced ongoing persecution and violence. Islamist militants reportedly incited mobs, killing Copts and destroying churches. Nor has the US supported Muslim women who are campaigning to reform gender discriminatory laws.

In contrast, they appear to favour the powerful Muslim Brotherhood, wishfully assuming the organisation has moderated its Islamist ideology, or could possibly act as a bulwark against Iran. The transnational Brotherhood, which has endured persecution and restriction for decades, will tread cautiously, avoiding Islamist rhetoric to allay Western fears.

US President Barack Obama's choices may be limited but his misreading of Islamist intentions could accelerate the religious extremism that is rapidly fading the Arab Spring's bloom.

Ida Lichter is the author of Muslim Women Reformers: Inspiring Voices Against Oppression.