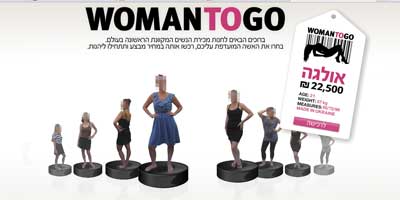 In a shopping center in Tel Aviv, women standing in a window display tagged with price tickets, were being offered for sale.

Each woman's price tag detailed her age, weight, height, dimensions and country of origin – written as “Made in...”,  like a piece of clothing.

It was part of a protest to highlight the problem of human trafficking for the sex industry.

" An estimated 3,000 women are living in Israel today having been smuggled into the country, sold and resold while being assaulted, raped and starved. "

In addition to the display in the Dizengoff Center, people could go to the website Womantogo to look at the girls for sale. To further radicalize  the message of the platform, campaign organizers used a product comparisons website in which the “buyer” could compare the range of different  women.

When a buyer chose a woman, then clicked the mouse on her image, the buyer was led directly to  Womantogo to sign a petition to pressure the Israeli Justice Ministry to back legislation that makes it a crime for men to patronize prostitutes.

“What we see here today is an example of what’s going on in houses, and basements, and yards in this city, but today we’re showing it in the center of this shopping mall so people can understand. They cannot look away.”

Distress and violence meted out to the women (all models) was shown on their faces – a strong motivator for shoppers to sign a petition calling for people who pay for sex to be prosecuted.

I COULD NOT MOVE

On the contrary - they commented on  the exposition, by words, and by body-language, and by standing in silence as if in shock. Like myself.

I could not move, nor could I speak a word.

I was shocked, although I am very well   aware of the issue of sex trafficking, due  to the fact that  I am  activist for  women's rights; in practice, with the office  of the Mayor's Consulant for Women's Status,  and in a virtual way, as part of the Safe World team.

WHAT IS HAPPENING, THE KIDS ASKED

A boy and two girls standing nearby, about 9 – 14 years old, asked their parents what was happening.

I heard the mother of one of them explain in a clear and straightforward manner the meaning of the protest, after which one of the girls signed the petition.

Her action touched me, and made me happy: this girl has started on the right path.

Campaign organizers hope that the success of this protest — with the collection of signatures, will pressure the Israel legislature and help reduce the demand for sex workers; that it will be the clients, and not the prostitutes who will bear the brunt of the law.