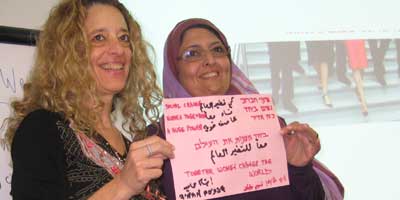 Ibtisam with Tsipi Glickman, the head of Shin - Israeli Movement for women's equal representation. For the last 5 years, Shin has been working with Ibtisam collaborating in the project 'Women Reborn' to empower women in Arab villages in Israel.

Photo: Irit HakimShlomit Lir, director of Women Activists Online, was the meeting facilitator and is the initiator of the website, 1325 Women & Peace. The website was built in order to centralise information related to the participation of Israeli women, from all walks of life, in political processes, based on the United Nations Security Council Resolution 1325 and the Israeli law. 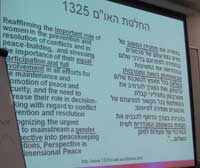 “I met Tamir in a meeting held in Tel Aviv with women organisations and feminist activists around UN resolution 1325. In this meeting I talked about the importance of the inclusion of women from all walks of life in peace talks – a suggestion that was finally embedded into the bill and to the amendment of the law.

After the meeting, I talked to Tamir and suggested to promote the bill by building a website and having an online petition that supports the amendment to the law." 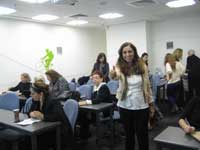 Shlomit Lir. Photo: Irit HakimShlomit has cooperated with another inspiring woman, Ms.Colette Avital, an Israeli diplomat and politician. Colette served as a member of the Knesset for the Labor Party and One Israel between 1999 and 2009. Colette decided to run for presidency as a result of the Women's Parliament event.*(see footnote)

Colette's election campaign was promoted by "Women for Presidency" – a coalition of eleven feminist and social organizations led by Shlomit in order to promote the election of a woman president in Israel. Collette was the first Israeli woman who, in 2007, was a candidate in the Israeli presidential election, together with two men – Mr. Shimon Peres, today's President, and Mr. Reuven Rivlin.

Despite voices from her own party calling on her to withdraw from the race in favor of ex-labor leader, Shimon Peres, she kept running.

Thousands of people had signed the petition in her favour, but she lost.

The impact of the Women for Presidency campaign and her running was huge, since the 2007 elections, more and more women dared to try and to act: to run for political office and/or to become activists.

Participants at the meeting. Photo: Irit HakimThe concept of the meeting, as Shlomit put it, was that we can use the social media as a tool to advance women’s issues. We can bypass the exclusion of women in the traditional media, (television, newspapers, and radio), and make a feminist meme:

“A notion of a meme is that an idea or concept can be transmitted from person to person within the culture, until it becomes a common knowledge. This can be seen in social media with the extent in which ideas are spread between people (through like, share, etc).

"The concept of feminist memes is to spread feminist notions and help make them accepted as common knowledge.

“In the overall picture of things the wished target of feminism is to end feminism… this shall happen, when we do not need feminism anymore – when we know, feel and experience equality.” says Shlomit “ Women  in Israel and in the world   have achieved quite much, but not enough”.

In Israel there are three women party leaders, and another four parties that have women leaders, which are not in the Knesset (Parliament) yet:

"I established Poalot Bareshet (Women Activists Online) as part of my PHD action research, that included a workshop teaching building blogs, adding entries to Wikipedia, using Twitter and Facebook as tools to women activism. The workshops and the interviews with the women activists had shown me the importance of using the new media as a tool of promoting the voice and presence of women in the public sphere"

At the end of the meeting, to demonstrate the potential of facebook to promote women participation in peace talks, we took photographs of ourselves and uploaded them to facebook – as predicted one of these pictures – that of Ibtisam and Shlomit has received hundreds of likes and shares around the world.

* The Women's Parliament event took place in August 2006, and was hosted by MP Yael German (who was the mayor of Hertzila at the time). In this significant event, six women were presented as equally suitable for the role of the president. The event was followed by a 'roundtable discussion' on 'an alternative outlook on the institute of presidency in Israel'.

Information kindly supplied by Esther Hertzog. Esther founded the Women's Parliament in 1999 and is its coordinator.