Israeli Women Break Out from the Pain of Violence & Abuse 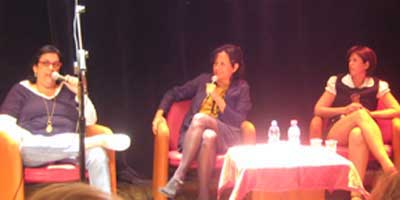 Survivors of Violence Join Together

On the 22nd November 2011, a group of women gathered in the city of Rishon le Zion, to mark the day UN's International Day for Elimination of Violence Against Women. It was organized by the municipal office of the advisor to the mayor of women's status.

An audience hall full of women –  and quite a few men - were there to support the important goal towards making another step forward in the struggle to eliminate violence against women.

An actress, a singer, and a panel of three women – all of whom had succeeded in breaking the circle of violence and pain, shared the stage to voice their experiences.

Iris Kagan, the Women's Status' Advisor to the Mayor, opened the event, quoting statistics: seven women had been murdered in Israel this year due to domestic violence.

"This is a disgrace to the society, who does not prevent such acts. A society who tags the abused women as weak women, who come from the periphery, that they are from a low socio-economic background. That is absolutely not true," says Iris, "Every woman might be a victim, no matter her background."

It is not only sexual abuse that is violence. There is an economic violence/abuse too.

She said that there are women who do not have a credit card, or cannot go to the bank, because they do not have permission to use the money – even when they work and earn money..

Her message to all was: Do not be afraid; everything is in our hands; go out and seek a help. There is the City Support Center for any woman who needs help.

"I am calling upon every woman to join us at the Women's Net, which is being established now."

Taking Back Her Rights - Tzufit Grant

Tzufit GrantThe event was moderated by Tzufit Grant - actress and the president of 'The Circle of the Friend of Enosh'.

Tzufit shared her story, which began at the age of five, when her parents had divorced.

The father took two of the children. She stayed with her mother, who gave her away to the grandmother, saying – if the kid doesn't behave, she might "put her on the street".

Little Tzufit had run into a cupboard to hide. She was now frightened she would be thrown to the street. This fear haunted her. So, until the age of nine, she learned the household's single mission: just to be a good girl, and not to give her grandmother any reason to send her to the street.

Years afterwards, her mother took her back. But all was not well...

Coming back from school to an empty house one day, she waited in the stairway for her mum to come back from work. There was a nice young neighbour, a father of small kids, who pitied her and invited her into his home.

In a short time he abused her, but she didn't understand it was wrong for he said he loved her.  He held her and hugged her, and touched her…he was like a father to her – so she thought.

But, one day, when she somehow realised something was wrong with this relationship – she asked to study in a boarding school. He came to visit her there, against her will, so she kept running away whenever he arrived, until he stopped coming. She grew up as a frightened girl.

She was sacred of everything and everyone.

At 14, the school's guide locked her in her room, and raped her regularly. She didn't know she had the option to reject him.

She decided to leave the school and to go to live in a Kibbutz, a collective community.  After two months, she left because a man attacked and raped her. She was back to her mother's home, and tried another boarding school, where she was soon abused by the older boys.

She felt she didn't know the correct way to react and became a 'mental impotent'. She didn't know how to say "go away" to her abusers.

She was like a prisoner of a concept, of non-action.

Tzufit told the audience that only very recently has she become assertive –  and has learnt how to take her rights back into her hands.

Ori Piaf - from suicidal thoughts to a singing career

Ori Piaf Ori, whose stage name is stage name is Ori Piaf, is a jazz singer with a beautiful voice, sang Edith Piaf's songs. (Edith Piaf is a legendary singer from France).

Between one song to the other, she told us about her nightmare: when she first went to the theatre to study, there was a man there who tried to break her spirit, telling her she was not good enough.

She was noting at the time that she had been in a suicidal depression.

Luckily she had the support she needed, and overcame all this. Ori is a very successful, well-known singer.

On the panel, there were 3 women:

Shani Shitrit Shani Shitrit is battling with discrimination - with regard to her sexual orientation and also disability. At 4 years of age, Shani had an accident which resulted in a leg amputation.

Shani's struggle was to live as she wanted: the struggle for her freedom and her independence.

When her parents - who were devoutly religious - realised that their daughter was lesbian, they ostracised her and refused to recognise her as their daughter. They forced her leave home when she was 19.

Shani remembered herself as a very young girl, praying –  but not believing (in God), always trying to hide herself, to be nice, to be a good girl.

That is why she hid the fact she was lesbian.

She couldn't tell her parents.

Between the ages of 12 to 18, she felt she wanted to hide –  all the time. Her parents grew suspicious and eventually, she told them, because they asked questions, and she wouldn't lie to them.

It hurt so much to be deserted, but being physically disabled from such a young age, she was pushed to achieve what she wanted.

Shani is a member of Tehila - an organization which helps parents of gays and lesbians to understand and to help their children.

She had been abused from the age of three. She didn’t understand it was wrong when her father touched her; she thought that is the way he shows his love to her.

Only when she was 12 – the age when girls talk about intimate issues, did she realize the horror.

She told her mother all about it, but the reaction was a strong slap.

She knew then that nobody was for her, except herself.

She was told many times she was nothing, she was bad, and she was incompetent. So, she decided to "show" them all. She worked hard to achieve the best marks, and she graduated successfully. She kept on studying, even more.

Today, Roni has her own office as a lawyer specializing in feminist law, gender law, legislation, and administration.

Rachel Noach Rachel Noach is a divorced mother of two, and now the owner of a chain of kindergartens.

Rachel has a tragic past with a disastrous marriage to a man of hard character, who had left her with a newborn, for her best friend.

A while later, he shot his lover –  who had by then left him.

Rachel was initially the main suspect for murder...then, they charged and imprisoned the ex-husband.

The young daughter tried to commit suicide, and was hospitalized for ten days, then released.

This and the father's story are now on the daughter's record – both facts which could mar her chances in life.