Iran: The Trial and Execution of Shahla Jahed 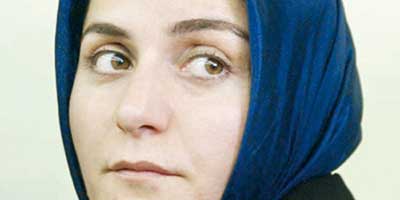 THE STORY & THE FILMS

Shahla Jahed became a household name in Iran in 2003, when her murder trial was filmed and made public.

She was tried on charges of murdering the wife of Naser Mohammadkhani, a football legend who rose to fame in the mid-1980s and coached Tehran's Persepolis club.

In the film, made into a documentary called Red Card, we are able to see for the first time how the Iranian judiciary system works and how little hope there is for anyone who is at its mercy.

At the very beginning of the court case, before any statements from lawyers and before witnesses are called, we see the family of the victim being asked whether they want the accused, Shahla, to be executed.

From that point onwards the girl has no hope, and what takes place is a parody of justice.

Despite publicly withdrawing the confession on several occasions during the trial, it is obvious that her 'guilt' is a forgone conclusion.

At the end of the film, after she has been sentenced, a poignant interview is shown with a lawyer, who refuses to show his face on camera.

He refutes the evidence against Shahla and shows paperwork which he says provides forensic evidence that questions her guilt.

The films were subsequently banned in Iran.

The case against Shahla was based around 'a confession'.

According to Major Abharian, one of the officers assigned to the investigation of the case, her former lover and husband of the dead woman was allowed to visit Shahla at Tehran’s Agahi (the police criminal investigation unit).

No record of that meeting exists. But according to a senior officer of the Tehran police force, Major Abharian, Nasser Mohammad Khani and one of his friends were allowed to meet Shahla and following their visit Shahla decided to confess to the crime.

Major Abharian also questioned the way the investigation was handled at the crime scene.

In a statement to the International Campaign of Human Rights Lawyers (ICHRL), Major Abharian explicitly stated that Shahla Jahed was innocent and believed that the police and the security agents had planned all along to blame Shahla Jahed for the murder of Laleh Saharkhizan who was killed by the security organizations.

Furthermore, during the investigation, traces of the crime were cleared and evidence that showed Shahla Jahed’s innocence were destroyed by some of the plainclothes agents acting under the supervision of Colonel Kashfi, Tehran’s Criminal Investigation Unit deputy director.

In 2005, Shahla Jahed's lawyer requested a review of the execution order, arguing that Shahla Jahed’s case had not been properly investigated.

In November 2005, the then Head of the Judiciary ordered a stay of execution so that the case could be re-examined. However, the death sentence was upheld in September 2006.

In early 2008, the Head of the Judiciary again overturned the verdict and ordered a fresh investigation, citing "procedural flaws". However, Shahla Jahed was again sentenced to death in February 2009 by the General Court.

On 13 September 2010, Shahla Jahed wrote to the current Head of the Judiciary, Ayatollah Sadegh Larijani, asking for a final decision in her case.'

'While Shahla thanked the worldwide efforts done to save her life, she said that she received her execution sentence and that she is expected to be hanged tomorrow...

Shahla’s last message is indeed a call to us, to do whatever in our power to save her life'

Reports started circulating that Shahla had been executed in Evin Prison.

The information was found to be incorrect and a journalist started sending messages via her Facebook page about the exact situation.

Shahla's family had gathered outside Evin Prison with 100 friends while her lawyer went into the prison.

At 7.00am Iranian time confirmation was received that Shahla had been executed.

According to a Twitter source, Shahla's last words to her lawyer were a simple request:

"She asks not to publish any picture of her that shows her tears."

The unjust and immoral execution of Shahla is a repulsive act of barbarism by the judiciary of the Islamic Republic of Iran.

We call on all governments to condemn this action immediately.

It is only through unified action by the whole world that the Iranian regime will be forced to start to respect international law and human rights.

Our heartfelt sympathies go out to the family of Shahla.