The Story of Zahra Bahrami - Dutch Citizen Executed in Iran 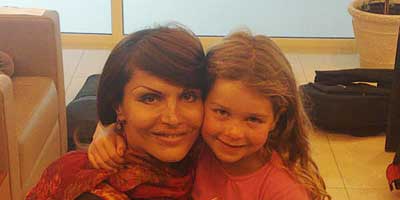 On Saturday, 29th January 2011, Iran executed Zahra Bahrami, before the lawyers recently appointed by the Dutch government were allowed access to her.

“I am shocked. I was absolutely not informed about this. They should have informed her lawyer of the execution, but I had no idea.
Jinoos Sharif Razi, Zahra's lawyer.

In 27th December 2009, Zahra Bahrami - 45-year-old mother of two, was arrested in Iran during the Ashura protests, and held in Evin Prison.

The charges described her as a ‘mohareb’, an enemy of God.·She was charged with belonging to a monarchist group, setting up an anti-government organisation and spreading anti-Iranian propaganda.

Zahra had apparently travelled from the Netherlands to visit one of her children in Iran.

On the 23rd July, 2010, the Dutch foreign ministry in The Hague became aware that Iran was holding a Dutch citizen. Zahra had a Dutch passport.

In August, 2010, Zahra's case went to court and she came to the attention of Amnesty International:

“We’ve learned from publicly available resources that she was involved in the Ashura protests in December, one of the many demonstrations following the Green Revolution.

She was picked up there and may have been condemned to death. We also understand that she may have a Dutch passport.

That’s all we know.”

“You’re in fact abused or tortured as a matter of course.

Then, you almost always get an unfair trial. In a number of cases – as has already happened in the aftermath of the Green Revolution – the death sentence is handed down. So it’s very probable that she has been tortured,”

At the same time, the Dutch foreign ministry apparently received reports that she would shortly be sentenced to life imprisonment or be given the death sentence. The acting Dutch ambassador in Tehran asked for clarification about her case.

Iranian law does not recognise dual nationality and would not allow the Dutch Embassy to get involved.

However, a spokesman for the Dutch foreign ministry said officials would "continue to press to be allowed to visit her and ensure she gets a fair trial."

Zahra was denied legal representation at the start of her trial, according to The Human Rights Activist News Agency, HRANA.

Radio Netherlands Worldwide reported that Zahra was not allowed any visitors.

'She is only allowed to spend a few minutes on the phone to her family very occasionally, with the calls being monitored by the intelligence service.

Her family have been told that the publicity surrounding her case will only worsen her situation.'

However, on the 4th September, Nasrin herself was imprisoned on charges of "propaganda against the state" and "conspiracy to disturb order", 4 days before Zahra's next court appearance.

Zahra appeared in court on the 8th and 9th September but refused to speak in Nasrin's absence.

On the 20th September, the Human Rights House of Iran, RAHANA, reported new charges of drug possession and drug sale.

Under Iranian law, adultery, murder, drug trafficking and other major crimes are punishable by death.

However, an informed source told the International Campaign for Human Rights in Iran (ICHRI) that during Zahra's detention, her interrogation team was the Iranian Intelligence Ministry’s Anti-Espionage Team.

Therefore the possibility that her initial charges were drug-related is nil, says the ICHRI.

According to the source, during her first few weeks of detention in prison, Zahra was physically and psychologically tortured to provide televised confessions according to a pre-written scenario.

Members of the European Parliament (MEPs) urged Iran to grant her access to a lawyer, per international law. They were also urging the regime to either grant her consular access or release her immediately.

Zahra's family had been warned not to speak to the media, and the drug possession charges were apparently applied after European and foreign media reported her case.

Safe World for Women made contact with the family, via one of our staff. We were told of the family's deep concerns regarding public campaigning and media coverage. We chose not to take up Zahra's case. To date, we do not take up campaigns where this would be against the wishes of the prisoner's family. We will now be reviewing this policy.

On the 6th January, the ICHRI announced that Zahra's lawyer confirmed reports that Zahra had now received a death sentence:

"I could tell that she was extremely scared... I will do everything in my power to save my mother"
Banafsheh Nayebpor, Zahra's daughter

"At this time the court has only reviewed her drug possession case and as the amount of drugs allegedly found in her home was more than the legal amount, she has been sentenced to death.·

Sharif Razi, told the ICHRI that she was served with Bahrami’s verdict ten days ago.·

And regarding the issue of whether or not Zahra Bahrami’s death sentence could be carried out without reviewing her other charge?

“Yes, because according to the law, for the amount of drugs she possessed the punishment is death.·Even if she is acquitted from the Ashura Day “rioting” charge, which I don’t believe she will be, possessing that much drugs could lead to the execution by itself.”

"All I can say is that this was a very strange case for me; especially as Ms. Bahrami refuted all charges made against her and her prior confessions about the drugs"

”I have been involved in this case for nearly two months now....· This case is very complex and dangerous and my only hope is that she receives clemency and is treated with Islamic mercy. That’s my only hope.”

Asked about suspicions that possession of drugs may be a fabricated charge in Zahra Bahrami’s case:

“I really can’t say anything about this, as I entered the case very late. I was not present during the arrest, nor at the time of interrogations, and as I don’t have any reasons, I cannot express an opinion about this, either.· I can only say that Ms. Bahami herself brought up the issue of the fabrication during the first trial session and denied possessing drugs. These statements were completely different from her prior confessions.”

And what of the charges of 'contact with [pro-Royalist] group, Anjoman-e Padeshahi-e Iran.'Her lawyer continues:

“This charge is only based on her own confessions and there is no other evidence for this other than Ms. Bahrami’s confession.

But she, herself, has confessed that she was in touch with this group in London years ago, and after a short while she realized that they were swindlers, as she had supported them financially, and after a while she learned about their fraud.

But then she did her best to tell others about this group. She even went to the Iranian Embassy in London to report this story, which they seemingly ignored.”

Zahra's daughter, Banafsheh Nayebpor, was allowed to visit her on January 18th. She told Radio Farda in an interview:

"I was allowed to meet her at Evin for about 20 minutes and I could tell that she was extremely scared."

Asked about the charge of possession and distribution of drugs..

"My mother denied this charge in court, telling the judge that she had confessed to this charge under pressure."

"It is surprising for us that besides all her political charges and despite being kept in the political prisoners' section at Evin, she has been tried and sentenced on charges of possessing drugs."

Nayebpor also said her mother had denied belonging to a monarchist organization.

"Anjoman Padshahi (The Royal Association) has released a statement confirming that Zahra Bahrami had no affiliation whatsoever with the organization."

"My mother did participate in the protests and did give interviews to foreign media, but she was most definitely not a part of any monarchist organization."

She pointed out that critics of Iran's regime are regularly arrested on false accusations.

Nayebpor said that Tehran's chief prosecutor, Abbas Jafari Dolatabadi, told her about two months ago she should avoid giving any interviews to the media about her mother's situation.

"Mr. Dolatabadi promised to cooperate with me and told me that he would be available for me should I feel the need to discuss the matter with him, but after that he rejected all my requests for such a meeting."

Nayebpor told Radio Farda: "We have contacted the Dutch Embassy in Iran asking for their assistance in the matter and they have assured us of all the cooperation that they can offer."

"I will do everything in my power to save my mother," she said.

Zarah was now sharing a cell with Hengameh Shahidi who is serving a six year prison sentence for 'gathering and colluding with intent to harm state security' and 'propaganda against the system'.

On 27th January, Radio Netherlands Worldwide reported that they had been told by the Dutch Ministry of Foreign Affairs, that the Dutch government had now hired two lawyers to defend Zarah.

A spokesperson for the ministry said the Netherlands will do its very best to prevent the death sentence from being carried out.

The ministry announced that the Netherlands continues to press for consular assistance and a fair trial for Ms Bahrami according to international legal norms.

The two Iranian lawyers were assigned to the case once the death sentence was officially announced.

Iran's ambassador had said that a number of legal recourses were still available.

The Dutch government only gives legal support to citizens who are in prison abroad when someone is sentenced to death and wants to appeal.

Radio Netherlands Worldwide said that, until now, the Dutch government had used 'quiet diplomacy' to put pressure on Iran over Zahra's case.

“The only remaining hope is now that the Dutch government is prepared to put pressure on Iran” said human rights activist Sadegh Naghaskar.

Dutch lawyer and former MP Boris Dittrich has worked since 2007 for HRW in New York. According to him too often there are commercial or other interests standing in the way of firm condemnation:

”Against human rights violators such as North Korea we dare to say: what you do is wrong.That’s because we have few interests there.

But when it comes to countries with which we have trade relations, you see that it’s already much harder.... Iran has a terrible legal system. Human Rights Watch released a report on it last month. It’s up to judges to decide on a death sentence for a defendant, regardless of whether there’s evidence or not. Iran must be constantly criticised for this."

"It is unusual to carry out the death penalty so soon after the sentencing. The aim is to frighten people."
Sadagh Nagashkar, Dutch-Iranian staff member of Human Rights Activists for Democracy.

I am shocked. I was absolutely not informed about this. They should have informed her lawyer of the execution, but I had no idea. I don’t know what to say. Just that I am shocked."

She says Zahra was hanged before the file relating to a second trial on her political activities was completed.

Is this a warning to the Iranian people?

According to Amnesty International, Iran had promised to postpone the execution until the file had been completed as part of her trial.

Foreign Minister Uri Rosenthal voiced outrage and summoned the Iranian ambassador to demand an explanation. The Hague has suspended all official contacts with Iran.

A Dutch-Iranian staff member of Human Rights Activists for Democracy, Sadagh Nagashkar, is reported as saying, "It is unusual to carry out the death penalty so soon after the sentencing. The aim is to frighten people."