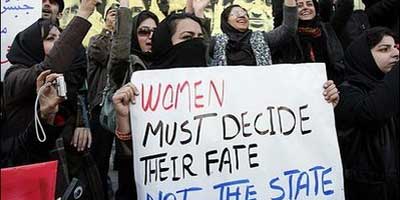 Physical and sexual violence against women in Iran, including violence perpetrated by state security forces, is rapidly increasing.

News releases in official media, which usually censor such topics, have surprisingly reported on incidents of gang rape and assaults against women.

Examples include incidents in the provinces of Isfahan (where 10 women were gang raped by 14 men), Golestan (where a village doctor was raped and assaulted by 4 men and a young girl was murdered by 2 men), and Khorasan.

Reports of similar developments continue to emerge. Following the attack and rape of a group of women, who had come together for a family gathering, in a private garden in Khomeini Shahr, by a group of thugs, the residents of the town demonstrated in front of the courthouse demanding that officials find and prosecute the perpetrators. However, the judicial officials not only remained silent, but through public declarations began to blame the victims.

Victims of rape 'not proper Muslims'

The local Friday prayer leader said, “The victims of rape were not proper Muslims either.”

Even the head of Isfahan’s intelligence service, which is ostensibly responsible for the safety of the citizens, announced, “Perhaps these women would not have been harassed in the garden if they had at least kept their veils on.” A similar comment was made by an official at Mashhad University, following a rape and assault of a young female student. The University official said, “A young woman has to maintain her hijab in order to remain safe and to avoid such incidents.”

Such statements stem from a patriarchal mentality that denies men’s responsibility for their sexual behaviour. Men are seen as creatures with uncontrollable sexual desires, who are not bound by any moral sense and who could not care less about the consent of the other side.

According to this mentality, the only way to prevent such incidents is to make sure that men are not sexually stimulated. This means that all responsibility for male sexual action and aggression paradoxically lies with women. However, rape occurs all over the world, regardless of the way women are dressed and even when they are fully covered in a veil.

Devoid of any sympathy, government officials heartlessly pour salt on the wounds of rape victims with such comments, and in essence encourage a culture of assault and violence against women. Along these lines too, they do not describe rape as a crime but as a common sexual response to female sexuality inherent in male nature.

Rape is nothing new

As feminist and anti-rape movements around the world have shown, rape is a common feature of patriarchal societies, which maintain male domination through violence against and intimidation of oppressed groups, especially women. Rape is nothing new, neither in Iran, nor in other countries.

In Iran, however, the recent reports of rape and sexual assault reveal the hypocrisy of a State that attempts to present itself as a “model Islamic society” adhering to ethical and religious values. Moreover, rape is being used as a political tool of repression by the state’s security apparatus. For many years reports and testimonies have shown the prevalence of physical, sexual, psychological violence and torture against political prisoners in many of Iran’s prisons.

In recent years, during and after the mass protests against [Mahmoud] Ahmadinejad’s contested re-election (June 2009), rape was used as a systematic tool to intimidate Green Movement protestors and other dissenters, both women and men. The Kahrizak prison tragedy, the attack on Tehran University’s student dormitory, and the harassments in the basement of the Interior Ministry building are among the few incidents that were publicly disclosed.

Several courageous rape survivors have broken the silence. The recent video of the testimony of a 22-year-old woman released by the International Campaign for Human Rights in Iran is one example. These rapes have been occurring at the same time as a broader crackdown against women’s social participation is underway, intent on preventing gender equality.

Reintroduction of 1980s policies such as gender segregation in universities, strict control over students’ dress code, applied gender quotas in academic fields to limit women’s admission, and a requirement that female students study in their home cities or regions encompass only some of the recent attacks against women. They demonstrate the extent of misogyny of the Iranian state authorities.

Police violence against has taken a more public face

Police violence against women has also taken a more public face. Women have been targeted for violence on the streets under the guise of morality and under a policy called “guidance and discipline,” which includes programs such as "fighting against those inappropriately dressed", "chastity,” or "heightening moral security".

Police have targeted, violated, and humiliated women while labeling them as “improperly dressed or poorly covered". Violence and rape committed by the police, security officers, basijis and plainclothes security forces have been supplemented by thugs disguised as government agents attacking, intimidating and raping women. Even religious leaders have been using official podiums at places such as the Friday prayers, to express their anger towards women, describing them as “biting and devouring” creatures.

The regime’s insistence on maintaining an Islamic facade for the country manifests mainly through forcing hijab on women. The Islamic dress code for women is not a religious but a political symbol of sovereignty of the Islamic state, which the regime wants to maintain at the price of sexual and physical violence against women. Different factions of the regime, regardless of their internal conflicts, come together over their hostility toward women. However, these policies have been ineffective and have led to women’s increased resistance to police violence.

As women and women’s rights activists, we are protesting against systematic violence, constant insults and humiliation, and the blaming of victims for acts of sexual violence against them, by government authorities. We insist on our right to choose our clothing. Instead of worrying about controlling women’s style of dress or their hair, we call on all Iranian authorities and responsible institutions, such as the judicial and security forces, to take their responsibilities to ensure the life and security of Iranian citizens seriously who are constantly being subject to threats and violence.

We call on the judicial and security authorities in Iran to be accountable with respect to the systematic sexual violence and rape of female and male prisoners being carried out in state prisons. We call on judicial and security authorities as well as all religious leaders who insult women and accuse them of being guilty of provoking sexual assault, to stop these destructive accusations and use their same podiums for expressing apologies.

Victims of violence are in urgent need of medical care as well as the emotional and social support of the entire community. They are not responsible for the violence they have suffered. We therefore call on medical and social work professionals as well as the entire citizenry to treat victims of rape with sympathy and to support them in their attempt to return to their normal lives.

We ask Mr. Ahmad Shaeed, the United Nations Special Rapporteur on Human Rights in Iran, to call attention to discrimination and violence against women in Iran and pay his respect to them by arranging meetings with women activists and rape survivors on his visit to the country.

As a first step, while protesting the recent escalation of violence against women in Iran, we, as Iranian women, affirm our solidarity with our sisters in the region and the rest of the world and with the global campaigns for ending sexual, physical, gender-based and police violence. In honour of our collective struggle, we put on purple bracelets as a symbol of our voices all over the world and in protest to violence against women.