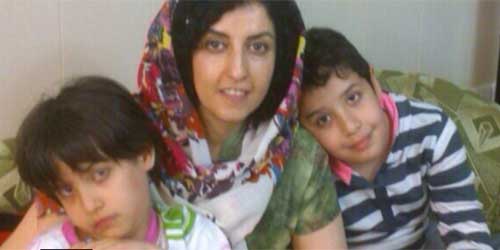 Narges Mohammadi - Imprisoned for advocating against death penalty in Iran

On September 28th 2016 an Iranian appeals court upheld a 16-year sentence for 44 year old Narges Mohammadi, a prominent human rights defender. Mrs. Mohammadi is Deputy Director of the Defenders of Human Rights Center in Iran, President of the Executive Committee of the National Council of Peace in Iran, a key member of the campaign for the abolition of the death penalty in Iran, a lawyer by training, and mother of two. She has been in and out of jail for the last 15 years.

Branch 36 of Tehran’s Revolutionary Appeal Court affirmed the sentence on September 28th 2016. Taghi Rahmani, Mrs. Mohammadi’s husband, wrote on his Facebook page that the court of appeal had issued the sentence without waiting for new documentation requested from Mohammadi’s defense team, an apparent violation of due process.

On May 5, 2015 the Intelligence Ministry came to Narges' house so that she was rearrested at her home, taking her back to finish serving a six-year prison sentence issued in 2010. The 2010 sentence was imposed based on a conviction that she was a member of the banned organization Center for Human Rights Defenders. She was released after three months due to a serious neurological disease causing muscular paralysis.

Despite her deteriorating health, on June 27, 2016, Mohammadi began a hunger strike to protest her lack of access to phone calls with her children. After a grueling 20 days, Narges Mohammadi ended her strike on a note of victory, because she persuaded the authorities to allow her to talk to her children on the phone.

In 2012 Narges Mohammadi’s husband, who spent a third of his life in prison because of his political activities, decided to leave Iran. But, despite harsh conditions in Iran's prisons, especially for political prisoners, Narges stayed behind with their two children because according to her husband Taghi Rahmani, “she believed she could be more effective inside the country.” But, her children joined their father in France after her imprisonment in 2015 and she wrote an emotionally loaded letter to the Prosecutor General of Tehran in July 2015, in which she also demands better treatment of women in the prison.

Revolutionary Court that often adjudicates cases of human rights defenders found her guilty of “gathering and conspiring with the aim of committing crimes against national security,” sentencing her to five years in prison, one year for “propaganda against the state” and 10 years for “forming and managing an illegal group.”

Many Iranian human rights defenders have been detained since the establishment of Islamic Republic of Iran under allegation of committing crimes against national security. Indeed, social and cultural community engagements, or civil society educational and outreach programs that represent any alternative to the existing narratives and laws of the Islamic Republic’s establishment are susceptible targets for accusations of breaching national security.

What added ten years to Narges Mohammadi’s case is that she had been “forming and managing an illegal group.” The “illegal group” is her support and activity in a community based organization called Legham, an organization calling for the abolishment of the death penalty. Under article 134 of the Islamic Penal Code, since she received three sentences, she should have only served concurrent time and the longest which is ten years not 16 years!

The issue of the death penalty in Iran is a major concern of human rights advocates. It is no secret that Iran continues to have the highest per capita of executions in the world. Ahmad Shaheed, Special Rapporteur on the situation of human rights in the Islamic Republic of Iran, in a report presented to the UN General Assembly human rights committee in 2015, wrote “The Islamic Republic of Iran continues to execute more individuals per capita than any other country in the world. Executions have been rising at an exponential rate since 2005 and peaked in 2014, at a shocking 753 executions.”

In a recent interview with Radio Free Europe, Taghi Rahmani said “[The persecution of] Mohammadi is [being] used to instill fear among activists and also to demonstrate [Iran's] disdain for human rights principles." He insisted that his wife, “is a law-abiding activist who regularly voted in the country’s elections and never crossed the regime's vaunted "red lines" and continued that "She’s only called for a change in laws to respect human rights."

Narges was born the year that Evin Prison, one of the most notorious prisons in Iran, was constructed under the late Mohammad Reza Shah. In May 2016 Narges, who is a member of PEN International, wrote from Evin prison explaining her situation and what the 25 other female political prisoners are experiencing. Her letter from Evin is as follows:

“I am writing this letter to you from the Evin Prison. I am in a section with 25 other female political prisoners, with different intellectual and political points of view. Until now, 23 of us have been sentenced to a total of 177 years in prison (2 others have not been sentenced yet). We are all charged due to our political and religious tendency and none of us are terrorists.

The reason to write these lines is, to tell you that the pain and suffering in the Evin Prison is beyond tolerance. Opposite other prisons in Iran, there is no access to telephone in Evin Prison.  Except for a weekly visit, we have no contact to the outside. All visits take place behind double glass and only connected through a phone. We are allowed to have a visit from our family members only once a month.

As a defender of human Rights, who has experienced and have had dialogues with many people detained in solitary confinement, I emphasize that this kind of punishment is inhuman and can be considered psychological torture.

As a humble member of this prestigious organization, I urge all of you, as writers and defenders of the principles of free thought and freedom of speech and expression, to combat the use of solitary confinement as torture, with your pen, speech and all other means. Maybe one day we will be able to close the doors behind us to solitary confinement and no one will be sentenced to prison for criticizing and demanding reforms. I hope that day will come soon.“

In a 2016 report, titled “Inside the Women’s Ward: Mistreatment of Women Political Prisoners at Iran’s Evin Prison” The Campaign for Human Rights in Iran states that, “political prisoners held in the Women’s Ward at Iran’s Evin Prison are routinely denied medical care and hospitalization, face severely restricted or denied visitation rights even with their young children, are deprived of regular telephone contact with their families, and are not provided adequate nutrition.” The report concludes that “these conditions, detailed in accounts by current and former inmates of the Ward, violate Iran’s State Prison Procedures and its international obligations regarding prisoner treatment” and “There are at least 25 known inmates at Evin’s Women’s Ward, prosecuted for peacefully exercising their rights to freedom of expression and belief. Their convictions were reached without due process, in sham trials."

Miles away from Evin prison, on April 22, 2016, Mr. Mohammad Javad Zarif, Iranian Foreign Minister addressed the special session of the United Nations (UN) General Assembly -- High-Level Thematic Debate on Achieving the Sustainable Development Goals (SDG) and said  “The Islamic Republic of Iran is fully committed at the highest level to the effective implementation of the Agenda.” and  “I wish to conclude by expressing our sincere hope that the historic global blueprint document, that is, the 2030 Agenda and the Paris Agreement, will be instrumental in bringing us together for furthering our collaboration and partnership towards achieving the SDGs.“

Mr. Zarif and Iranian government were not mindful of the fact that there is a strong connection between achieving UN 2030 Goals and the importance of the role of women human rights defenders and the responsibility of states to protect it. On March 16, 2016 in a high-level event organized by UN and co-sponsored by the Women Human Rights Defenders International Coalition (WHRDIC), a clear line is drawn between the role of women human rights defenders and accomplishing the 2030 agenda that Iran Foreign Minister expresses Iran‘s “ full commitment to it. The event “Empowering Women by Empowering Women Human Rights Defenders” emphasized that the “Achievement of the 2030 Agenda for Sustainable Development is only possible if women human rights defenders (WHRDs) are genuinely involved in programs for its implementation.“ The UN then called for States and the United Nations itself to urgently take steps to ensure the protection of Women Human Rights Defenders and their recognition as key stakeholders and partners in the 2030 Agenda.

How does Iran intend to commit to the UN 2030 Agenda while criminalizing women’s human rights defenders and silencing their voice under the guise of national security threats?

The Islamic Republic of Iran is accountable to adhere to the body of International laws and fair trial with due process for political prisoners and so that women human rights defenders like Narges Mohammadi, who deserve to be praised for her human rights work, do not languish in prison and do not become collateral damage to the jubilation of US and EU countries accessing the economic potentials of Iranian market.