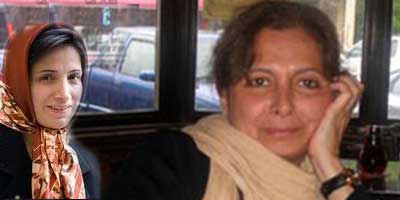 "In my memory, she is an angel. She has a very beautiful mind”

Interview by Joanne Michele,  Iran Correspondent for Safe World
With thanks to Mehran Divanbaigyzand for translating

Mehrangiz, thank you so much for talking to us. You have been friends with Nasrin for many years. How did you meet?

Mehrangiz explained that she and Shirin Ebadi were really the only two female lawyers who were actively demanding Human Rights in Iran, before the Khatami period.

Mehrangiz Kar and Shirin Ebadi were writing articles in newspapers.

"Nasrin is not the only innocent lawyer to be arrested in Iran by secret agents or the military."

Only after the 'reform', did the men and others join in.

When Nasrin Sotoudeh was in her early thirties, she came to see Mehrangiz in her office because she was interested in getting involved herself.

"She planned to be an activist and was looking for an opportunity to be active in human rights and women's rights."

That was over fifteen years ago.

What do you remember of your time with Nasrin in Iran and her passion for Human Rights?

Mehrangiz lived near to Nasrin and she would get wake-up calls from Nasrin several times a week, to talk about human rights issues.

"Nasrin is a very, very honest woman and I cannot believe.. that she could do anything against anybody else.

towards it - I was struck by her exceptional passion for human rights.

To become a lawyer in Iran, you have to work with a lawyer who has 10 years experience.

After 2 years of that they can approve you and you take the bar exam and you can be an independent lawyer."

In 1995, she took and passed the bar exam successfully. The previous year, Nasrin married Reza Khandan, who supported her efforts and continues to stand by her, through their ongoing traumas.

What do you remember of Nasrin's family?

"Once I asked Nasrin why she wasn't starting a family. She said, 'Ms Kar, I am afraid if I get pregnant I cannot work for other people and all my time will be preoccupied by my children'.

She became pregnant several months later and I told her now she can understand Human Rights better because she knows what it's like to have a human being growing inside of you - that being needs to have perfect rights - that child will be under discrimination and a bad legal system."

Nasrin and Reza's daughter, Mehrawareh, was born in 1999.

(Mohammad Khatami was elected as the President of Iran in 1997, promising reformation and the implementation of a democratic and more tolerant society. However, he faced fierce opposition and, after 8 years of presidency, he was widely considered to have lost the power struggle with his opponents.)

Can you describe the situation for lawyers in Iran at that time?

"After the "reform" everybody who was working for democracy, human rights and women’s rights did so according to the law - the journalists and activists had no political organization.

"Solitary confinement comes under the concept of unfair treatment. Even Khamenei has said that it is the worst kind of torture".

When they were arrested, some Iranian lawyers went to help them - and those lawyers were targeted.

The ones working for reformist newspapers, criticizing the judiciary, Mortazavi and secret agencies were targeted.

They were helping to promote human rights dialogue in Iran - everything was legal, but they were targeted anyway."

(Saeed Mortazavi is the former Tehran Prosecutor-General and one of 8 individuals recently listed by the U.S. Department of State who 'share responsibility for the sustained and severe violation of human rights in Iran since the June 2009').

Mehrangiz said that, in 2000, she herself was arrested for analyzing the Iranian legal system, after participating in a conference in Berlin, though she was not working illegally.

After Mehrangiz was arrested, she was pressured to not talk to Nasrin.

Censorship was getting worse and Nasrin could not publish interviews she did with Mehrangiz, in the Khatami period.

There has been increasing persecution of lawyers after the reform movement. What do you think might have been the tipping point to arrest Nasrin?

"Nasrin is not the only innocent lawyer to be arrested in Iran by secret agents or the military".

This is not a new thing - 10 or 15 lawyers have been arrested since the 'reform'. (Khatami's presidency).

"Nasrin is a very, very honest woman and I cannot believe, not just as a lawyer but as a human being, that she could do anything against anybody else.

"Under the concept of a fair trial, the key thing is to have access to lawyers and this is not being practiced."

In my memory, she is an angel. She has a very beautiful mind.

Nasrin was working according to the legal system and she knew that the system is full of discrimination and violations against Human Rights and democracy.

Even though she knew about the systematic violations, she was working to help her clients. She understood that the system is full of dangers but she was sensitive about Human Rights.

As Nasrin increased her work defending people who simply advocated for Human Rights, she would not stop.

Some Human Rights lawyers have been forced to flee because of the persecution and are under pressure. She would not stop and resisted heroically.

She knew that she would be targeted. But she always followed the law, made sure that her speeches were free of slogans and concentrated on what is lawful. She stayed within the boundaries of law."

"Solitary confinement comes under the concept of unfair treatment.

Even Khamenei has said that it is the worst kind of torture. How can the leader say this but the judiciary practice it?

What is important in securing Nasrin's release?

"One of the ways we can do this is to focus on the violations of international law that are evident in her situation.

This [her detention] is illegal. They don't care about the legal system. She is doing her job. That's it.

"When there is not a jury during the trial, that trial is not legal even under the Islamic Republic's structure."

There are 2 points to help, two points to protect and support her:

1) The rights of lawyers in the modern legal system all over the world. Focus on the security and safety of the lawyers internationally.

Safeguarding the position of the lawyer to defend his or her clients. Even if they're murderers, if you don’t have the security to defend them, there is no judiciary system.

2) Emphasising the concept of fair trial, which is mentioned in international documents the regime has signed.

Under the concept of a fair trial, the key thing is to have access to lawyers and this is not being practiced. It is routinely being violated.

Article 168 of the Iranian constitution states:
'All political prisoners are afforded right to a jury trial and must be public'.

When there is not a jury during the trial, that trial is not legal even under the Islamic Republic's structure. This has been routinely violated since the 2009 elections."

In 2000, Mehrangiz Kar and sixteen other Iranian journalists, activists and intellectuals attended a conference held at the Heinrich Böll Institute in Berlin entitled “Iran After the Elections.”

Kar’s remarks about the urgent need for constitutional reform and on secularity in particular earned her censure.

Upon return to Iran, she was arrested and taken to Evin Prison, leveled with various charges, from “acting against national security” to “spreading propaganda against the regime of the Islamic Republic.” Kar was to be additionally tried on charges of “violating the Islamic dress code at the Berlin Conference,” “denying the commands of the shari‘a” and abusing sacred principles.

On 13 January 2001 she was convicted and sentenced to four years imprisonment on charges of acting against national security and disseminating propaganda against the Islamic regime.

Under pressure from the European Union and the government of Holland in particular, she was released temporarily for treatment in the US.

Two months later, her husband was arrested in Tehran and held incommunicado.

Only months later did they learn of his whereabouts as he was paraded before state television, visibly tortured. Pourzand had been accused of being a spy for America, an adulterer, working for the Shah’s regime and funneling funds from the US to the reformist press. The charges against him include espionage and threatening national security. It is thought that his disappearance may be connected to his position as manager of the Majmue-ye Farrhangi-ye Honari-ye Tehran, a cultural centre for writers, artists, intellectuals and activists.

He suffers from diabetes and a heart complaint.

Today, he is out of Evin on regulated medical leave, alternating between the hospital and his home. His prison sentence is outstanding.

Mehrangiz, in the meantime, remained in the US getting treatment, while in 2002, her criminal sentence was reduced to six months.

Mehrangiz Kar has received numerous awards for her work to promote Human Rights.

She has also been recognized as a Scholar at Risk through an international network of universities and colleges working to promote academic freedom and to defend the human rights of scholars worldwide.

Mehrangiz has written a memoir and is currently at work on publications surrounding human rights and constitutionalism in Iran. She has written many articles (both Farsi and English) and published at least fifteen books.

Mehrangiz Kar's website is a means of Kar writing about the country that she was born and raised in; the government of Iran does not give her the right to publish her views within the country she once called home.

Most recently, Mehrangiz was presented with an awared on International Human Rights Day 2010 by the American Islamic Congress, New England Interfaith Council for her human rights activities.