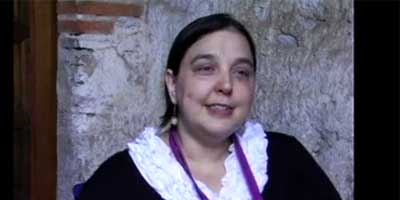 The Human Rights Watch's Alison Des Forges Award celebrates the valor of individuals who put their lives on the line to protect the dignity and rights of others.

One of this year's recipients, Sussan Tahmasebi, dedicated her award to the imprisoned lawyer and human rights defender Nasrin Sotoudeh and other detained human rights activists.

She has been a women's rights and civil society activist for nearly 2 decades.

For eleven years, Sussan Tahmasebi has worked in Iran at the national and grassroots level to address gender issues and women's rights and also to strengthen and promote the role of civil society organizations.

She is a founding member of the award-winning One Million Signatures Campaign, which collects signatures of Iranians who support an end to gender-biased laws in the country.

Campaign members engage in face-face discussions with Iranians from all walks of life across Iran and internationally. They then collect signatures in support of a petition opposing all gender-biased laws in Iran, including those that govern marriage and inheritance, compensation for bodily injury or death, and a woman's right to pass on her nationality to her children.

In June 2006, Sussan Tahmasebi was charged with spreading propaganda against the state and being a threat to national security for organizing a protest in support of women's rights.

She was tried on March 4, 2007, and sentenced to 2 years in prison, 18 months of which was suspended for 2 years. Tahmasebi appealed the ruling and was freed on bail pending the appeal, which is still ongoing.

On the day of her trial, women's rights activists held a protest outside of the Revolutionary Courts objecting to increasing pressure on women activists. When security forces began to arrest the protesters, Tahmasebi left the court and was also arrested, along with 32 others, and charged with being a threat to national security, collusion, and disobeying the orders of police.

She was later acquitted of these charges but continues to endure harassment by security forces who have performed a home search and subjected her to numerous interrogations. She was banned from traveling on several occasions between December 2006 and January 2009.

By conducting training sessions in leadership and peace-building, and coordinating the development of training materials on women's and children's rights, Sussan has worked to strengthen the capacity of Iranian civil society to effect positive change.

She has also played a key role in informing the international community about positive developments in the Iranian civil society sector and in promoting collaboration between Iranian NGOs and their counterparts internationally. The organization she co-founded, the Iran Civil Society Training and Research Center (ICTRC), which focused on strengthening the capacity of civil society, was shut down by security forces on March 15, 2007, a few days after she was released from prison.

Prior to her work in Iran, Sussan Tahmasebi worked for NGOs based in the United States focusing on reproductive and health issues as they affect underserved communities, including immigrants, refugees, and communities of color.

She is currently an editor of the English section of Change for Equality, the One Million Signatures Campaign's website.