The 2013 Iran election: What does it mean for women? 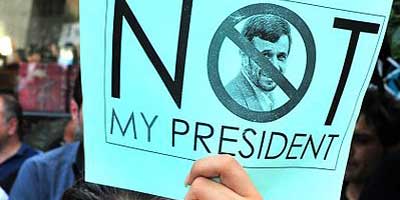 The June 14 presidential election: Iranians are being strongly encouraged to vote, with even Supreme Leader Ali Khamenei appealing to nationalism over religion. About 30 potential female candidates were prevented from running and were not subject to approval from the Guardian Council, which vets and approves all presidential candidates. Women can hold office on a local level and have held higher positions, but are not permitted to be president.

With only six candidates remaining, all of whom have been ideologically vetted by the Guardian Council, do women in Iran care about the election? Reformist candidate Hassan Rouhani has made some statements addressing women's increased participation in civic society; however, only one year ago, 36 universities closed 77 academic programs to women or imposed quotas on the number of female students. Saeed Jalili, a conservative candidate, has said that a woman's "core identity" is as a mother, urging his female supporters to call on women to fulfill their role as housewives. An entrenched societal gender apartheid continues to be reinforced by both law and prescribed practice.

Do Iranian women's rights defenders in and outside of Iran care about this election or see any impact on their daily lives? Do economic conditions necessitate begrudgingly overlooking gender equality? Do Iranian women, as women, see a duty to vote?

Mana M. isn't voting because she doesn't want to "cast support for any of the characters on stage." She says the election doesn't even matter. "A lot of people are disenchanted and don't think their vote matters anyway, especially in light of mass disqualifications. Gender equality is very important, but unfortunately it's not very important to those running, and it wouldn't be a top-level issue anyway. Women can't even participate in politics, so there's no real forward movement that can be anticipated. It won't affect women, and if it does, it will be negative (family courts, divorce, etc.)."

Maryam Mirza, a journalist forced to leave Iran after the 2009 election, says she will vote. "It is not the only thing that I can do for my country but one of them. I believe if the participation was not high in the previous election, no one could say the fraud happened. It is the way that we resist and survive and hopefully change the system, using their very own people to change the whole system."

Another woman, who wished to be referenced as a 40-year old school teacher in Tehran, believes that the election does matter, and plans to vote. "It might change some important things in the country. Voting is the only tool we have," she says. She plans to vote for Rohani, because other politicians she trusts recommend him. She feels women's rights are important, "but now there are many more important matters" - economics, sanctions and foreign policy, and freedom of speech - but "good results" in the election would "of course be good for women, too."

Sussan Tahmasebi, a women's rights activist based outside of Iran, does intend to vote, with the hope of helping to elect a reformist candidate. A major influence on her decision is that of her friends inside Iran, largely involved in social movements, also deciding to vote in the hopes of even slightly improving the course of the country. "This is a vote for the future of my country and myself," she says, and hopes that Iran can avoid greater isolation as a country and the threat of war. She believes that the election of reformist candidate Rouhani may lead to "some opening of space for civil activism, support for civil soicety, progressive policies in favor of women's rights, political participation and the reversal of the very negative policies that Ahmadinejad had adopted against women, such as the social safety program which targets women on the street for their form of dress, the quotas limiting women's access to university education, and the re-establishment of family planning policies." She notes that the conservative candidates have not offered anything progressive, while Rouhani has "committed to try to address some of the concerns of the women's rights movement. Women's groups have issued statements expressing concern about the push against women's gains over the last 8 years and the last 4 in particular. Some women's groups have demanded that the space for civil activism be opened up so they can address women's rights issues again in a more open and conducive environment. Women's equality and programs intent on addressing discrimination and promoting women's inclusion and participation are very important to all the activists in the women's movement when it comes to who they will vote for."

Sussan hopes that a reformist president may be able to "address some of the tensions at the international level," and hopes for at least the reversal of some of the sanctions imposed during Ahmadinejad's regime which "hurt civil society and average Iranians (especially middle class) most." She knows that another conservative president could lead to more regressive policies "intent on pushing women out of the public sphere," as well as the continued pressure on the press and civil society. "Depending on who the conservative elected is, we could see greater isolation of Iran and increased sanctions, which impact women and vulnerable groups the most."

X is a publisher whose publication was banned for "adherence" to the Green movement, which emerged in support of reformist candidate Mir Hussain Mousavi with sweeping protests against the 2009 election results. X has since been restricted from practicing freelance journalism, social and cultural activities, or giving academic lectures. In order to maintain a margin of safety to continue work inside Iran, X spoke anonymously:

"Of course the election matters! As a person living in a country in pursuit of a free democratic and developed country, I believe in all methods and tools, including the election process, that facilitate my ideals. But one must not forget that it is not an unconditional devotion. Sometimes, a totalitarian regime misuses such a process to strengthen its authority with a democratic pose. In this case, the election process, being emptied of its real meaning and function, would not be trusted anymore.

This year, as I think Iranian regime has passed a milestone of showing no flexibility to reforms, I am at the point that I see the next president, whoever it would be, as an executive officer in favor of the Supreme Leader. I have interpreted the power of authorities and organizations directly supervised by Ayatollah Khamenei to be much more than that of a publicly elected government.

Referring to the previous election process in 2009, many people are afraid of election fraud again. If so, the government would be reduced to an organization totally obeying the Supreme Leader.

But, let's be optimistic and forget about fraud. I have found some hope that my analysis about the balance of power might be wrong, according to the events during the presidential campaigns this year, though I am not yet satisfied with the evidence for a democratic development process through the state.

Let's assume that I finally decide to vote. Then, according to my beliefs, it would be quite normal that I vote for a reformist candidate, but there is no reformist candidate left to be elected. Now Mr. Rouhani, with his moderate viewpoints about reforms and as a member of a conservative assembly of clergies, inevitably has the support of reformist groups. He is a minor candidate according to the ideals of reforms and he has never introduced himself as a reformist. Anyway, reformists are hopeful for an exit from current blockage under his probable presidency and moderate policies.

Back to my doubts, I don't see in his face a man who negotiates with the Supreme Leader in favor of reforms, and this makes me unsatisfied with voting for him. In this scenario, even though I decide to participate in the election process, I do not have any favorite candidate to vote for. Thus, my vote would be a symbolic white vote that I pay for my belief in democracy.

With my background in cultural and social activism for more than a decade, especially in the field of women's rights, gender issues are for sure important to me.

I believe following a pragmatic and step-by-step feminist approach would be helpful regarding the realities of a religious and traditional society like Iran. Expecting such a minor but feasible approach could be traced implicitly in the words and promises of Mr. Rouhani and his technocrat consulars to some extent. The only candidate who explicitly spoke about the necessity of gender equality was Mr. Aref, the former vice-president during the era of Mr. Khatami's presidency. He left the election competition, indirectly forming a coalition with Mr. Rouhani. According to me, this would be accounted as an advantage for Mr. Rouhani.

In current critical circumstances, none of the issues related to women's rights and gender equality are enlisted as major priorities in the plans introduced by all candidates. They are concerned about Iran's nuclear file and international sanctions, as well as inflation and increasing poverty throughout the country. Among the main candidates, except the one with ultra radical viewpoints (Mr. Jalili, the current Iranian negotiator for nuclear issues with the coalition of 5 + 1), the remainders would follow strategies seeking for a sustainable situation regarding the mentioned challenges. In a more stable situation women would find more opportunities for personal and social qualifications. It would be an unreal expectation from these candidates to follow the direct pragmatic goals of feminist activists with a high priority. It is better to hope for a sustainable situation such that it helps volunteer activists continue their campaigns and long-term projects. If so, there is hope that the next government can choose a discourse supporting gender equality.The only threatening outcome of the election process would be the win of Mr. Jalili who is a hardliner and against all aspects of women's social activity. Beyond even the gender issues, it is worth noting that fear of his presidency is one of the major motivations to convince reformists, including feminist activists, to actively participate in the election and vote for Mr. Rohani.