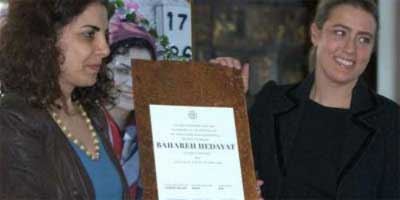 Parvin Ardalan, accepts the prize on behalf of the jailed activist from Caroline Edelstam

The very first Harald Edelstam Defence of Human Rights Award was given to jailed Iranian student activist Bahareh Hedayat on Monday in Stockholm.

The prize was awarded by Harald Edelstam’s granddaughter, Caroline Edelstam, chair of the international Edelstam Prize jury and Vice President of the Harald Edelstam Foundation, who said during the ceremony:

“Bahareh has acted in my grandfather’s spirit and shown a great amount of civic courage, which we hope can inspire others.

It is impressive that so many brave persons, aware of the risks they take, still stubbornly are willing to act in order to defend people who are victims of the violations of human rights. It gives us hope for a better world where we all can enjoy equal and human rights.”

Parvin Ardalan, who accepted the prize on behalf of the jailed activist, spoke of Hedayat’s role in linking the student movement in Iran with the women’s movement, together with other jailed female student activists such as Mehdieh Golroo, Shabnam Madadzadeh, Atefeh Nabavi and Fereshteh Shirazi.

Hedayat was arrested in the post-election crackdown on protesters in 2009 and charged with “propaganda against the regime for her interviews with the foreign press, insulting the Leader (Vali Faqih), insulting the President, acting against national security by participating in social and public gatherings, and helping organize group protests.”

She has been sentenced to nine and a half years in jail.

About a month before her arrest, Hedayet braved the potential consequences and released a video message on behalf of the Iranian Students Union, subtitled in English, to the students and academics of the European Student’s Union.

The Harald Edelstam Prize, according to the Edelstam Foundation, is “awarded for outstanding contributions and exceptional courage in standing up for one’s beliefs in the Defence of Human Rights” and it was established in the memory of the Swedish ambassador who “distinguished himself as diplomat by his professional competence, his bravery and his civic courage in the fight for Human Rights.” 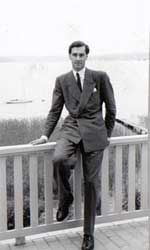 Gustav Harald Edelstam (March 17, 1913 – April 16, 1989) was a Swedish diplomat. During World War II he earned the nickname Svarta nejlikan ("the Black Pimpernel," a reference to the Scarlet Pimpernel) for helping SOE agents and saboteurs escape from the Germans.

During the 1970s he was stationed in Santiago, Chile, and became known as the "Raoul Wallenberg of the 1970s" when he helped Cuban diplomats and Uruguayan refugees and Chilean political active people escape persecution by Augusto Pinochet.

During the 1973 military coup against President Allende, the Cuban embassy was under fire by tanks and Cubans were returning fire from the windows; Edelstam took a Swedish flag in hand and walked in front of the tanks as bullets hurled past. He fetched the Cubans out of the embassy and took them to the Swedish embassy, then got them out of Chile to safety.

Edelstam also helped many other Cubans to escape from Chile and was honored by Fidel Castro as a hero.

Due to his remarkable courage and moral integrity, Edelstam is today considered as a true modern-day hero among millions around Latin America, and particularly so among the hundreds of thousands of Chileans who were forced into exile by the dictatorial regime.

Edelstam died from cancer in 1989.

A film about Edelstam's activities in Chile, The Black Pimpernel, was released in September 2007. He was portrayed by Michael Nyqvist.