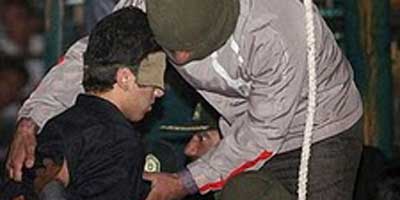 Elation and Horror in Iran on International Day of Peace

Two young American hikers were freed and flown out of Iran last night after being held virtually incommunicado in one small Tehran prison cell for 26 months.

The release of Shane Bauer and Josh Fattal was clearly designed to improve President Ahmadinejad’s standing before he addresses the UN General Assembly in New York today, but hours earlier the regime blatantly broke international law by executing a teenager.

Iranian teenager cried and begged for forgiveness before being hanged.

Alireza Molla-Soltani, 17, was convicted of murder and hanged before dawn in front of a crowd of thousands in the town of Karaj, 13 miles west of Tehran. Witnesses said that he was crying aloud, calling for his mother and begging for forgiveness before a crane hoisted him aloft by a noose around his neck. Some of the crowd cursed him, others chanted “Allahu akbar” [God is greatest].

Mr Bauer and Mr Fattal, both 29, were freed late yesterday afternoon on payment of $1 million (£644,000) “bail”. They were driven away from Tehran’s notorious Evin prison with a police escort to Mehrabad airport and flown to Oman on a private plane sent from the Gulf state, which helped to broker their freedom.

They were met there by their families and Sarah Shourd, 32, a third hiker who was released last September and became engaged to Mr Bauer while in prison. “Today can only be described as the best day of our lives,” their families said in a joint statement. “We now want nothing more than to wrap Shane and Josh in our arms and catch up on two lost years.”

Salem al-Ismaily, Oman’s Ambassador to Tehran, said that they would stay in Muscat, Oman’s capital, for “a couple of days before heading home”.

The hikers’ release ended an ordeal that began in July 2009 when the three friends were seized by Iranian border guards as they walked back from a well-known tourist spot near Iran’s ill-defined border with Kurdish-controlled northern Iraq.

Ms Shourd, a teacher, was freed on humanitarian grounds this time last year, but the two men remained incarcerated in a small cell with one small window and lights that were never turned off. They were allowed one short exercise session each day. They were denied access to lawyers or consular officials, and allowed to make just three brief calls home.

Last month a revolutionary court meeting in closed session sentenced the pair to eight years’ imprisonment for espionage and entering Iran illegally, though no evidence against them has ever been made public.

Their families called them political hostages and have campaigned relentlessly for their release for two years. Amnesty International said last night that “the Iranian authorities have known all along that these men were not spies”.

Execution of Molta-Soltani 'a breach of international law'

Mr Ahmadinejad is expected to deliver his customary condemnation of the West in his speech today, but it was the Islamic Republic that was denounced by human rights groups yesterday after it executed Molla-Soltani. Amnesty International called the hanging “a gross breach of international law”.

Alistair Burt, the Foreign Office Minister, called the execution “abhorrent” and “inhumane”, and said that the manner of his death — suspension strangulation — was a punishment with no place in the modern world.

Molla-Soltani was convicted of murdering Ruhollah Dadashi, an athlete known as “Iran’s strongest man”, after a driving dispute on July 17. He claimed that he acted in self-defence when Dadashi attacked him in the dark.

A spokesman for the prosecution claimed that Molla-Soltani had reached the age of 18, and “religious maturity”, according to calculations based on the lunar calendar, which is 11 days shorter than the solar calendar.