Iran Says Female Defendants Should Not Wear Chador In Court 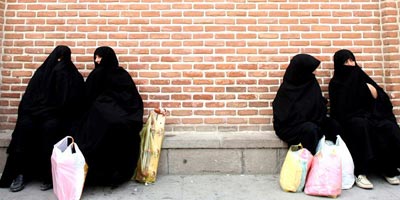 Eftekhari said the "sanctity of the chador would be blemished" if such women wear it, and the sight of women thus attired would have a "negative impact on society."

She added that most "guilty female defendants" do not believe in the full-body Islamic veil and have to be forced to wear one when they appear in court.

Prisoners should be 'draped in bed sheets'

Laleh EftekhariEftekhari also said the Iranian Prisons Organization, which requires women to wear the veil in court, should ask them instead to drape themselves in "bed sheets" or "a piece of cloth with the prison's logo."

In an interview with Radio Farda on September 19, women's rights activist Fatemeh Govaraee called such comments "an insult to women prisoners" and said the Islamic veil should not be sanctified. She argued that all women, including those who appear before a court of law, should be free to choose whether or not to wear a chador.

Eftekhari also said that in a meeting with the judiciary chief, women parliament deputies expressed their disapproval of Iranian actresses who wear the chador in movies in which they play negative roles. The judiciary chief promised to "deal with such problems," Eftekhari said.

Eftekhari had also previously said "the question of the black chador [for women] is more important for us than the nuclear issue."