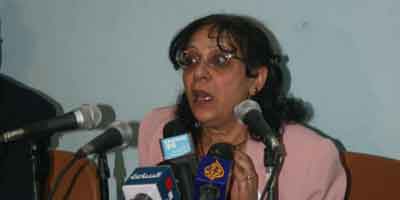 On the 25 of February, I met with Dr Magda Adly, the prominent Human Right Defender and the director of the el Nadeem Center for Rehabilitation of the Victims of Violence.

When I was talking to her, I noticed that, hanging in the wall of her house, she had the calendar paper from the 11th of February when Mubarak stepped down - and in this paper a wisdom quote :

"whoever is unjust, will vanish soon".

The wisdom was very relevant to our Egyptian situation.

I started the interview with a 'zoom out photo' of the Egyptian scene at the start of this year.

This year started with the brutal bombing of All Saints church in Alexandria.

Dr Magda said she felt that every year at the Coptic Christmas we celebrate it with bloodshed. Last year was Nagu'e Hamadi and this year All Saints.

The all Saints church incident created an unprecedented amount of anger in my heart...  I felt certain that there is a link between the interior affairs ministry (police) and this crime.

Dr Magda continued talking about the sectarian clashes, explaining that she had participated in many fact finding missions in Kosheh and Armant.

The common factor was that the police were witnessing the crimes and standing by without preventing it ...

I remember in Armant, the Muslim villagers gathered after the prayers and they were holding torches and chanting 'Allah is the greatest; we will purify the village from the copts infidels' - and the police were watching without intervening. In addition, the hose pipes to the fire department were broken; so as a result the church was burnt and the extremists continued to burn the copts' houses.

Years of struggle - "I was always waiting for the revolution"

I asked whether that was a zoom out for the momentum of a year, but I feel sure that the revolution was the accumulation of decades.

She meditated for a very short while - I think she was remembering all the glorious moments she witnessed in her long struggle for achieving her dream of a better Egypt.

I was always waiting for the revolution; since 2000 I was looking forward for it.

With the second Intifada (Palestinian uprising) - with the formation of the Public committee of supporting the Intifada of the Palestinian people - this public committee had branches in all the governorates and it gathered almost 250 thousand signatures on its petition and this petition was submitted to the United Nations office in Cairo and to the former president Hosni Mubrak.

There was political activism and many political events were held. However, the movement was not static and my feeling with it was varied, with highs and lows. After 2002 it was diminishing.

It reached a high momentum in 2003 with the invasion of Iraq and it was so spontaneous - the activists were communicating by cell phones to decide when and where to hold the demonstrations; however the participants were the political elite. Many activities took place, like the emergence of the Kefaya movement, till the critical year in 2005.

I knew by 2005 that we had to stop. 2005 was critical in recent Egyptian history, by witnessing the first multiple candidates presidential elections and the constitutional amendments. However in this year we also witnessed a turning point of the brutality of the Egyptian regime against its opponents, with using sexual violence in public against the political activists in 25th May 2005.

Dr Magda was there as an activist and as a women, and we can not separate those two identities.

I was there at the protest at Saad Zaghlol, then in front of the press syndicate, and the security troops decided to use the concept of 'honour' by dishonouring the male activists through attacking the female activists. This brutal patriarchal attempt led to the establishment of a political movement "el Share' Lina" - "the street is ours".

This movement consisted of many women and youth activists and men as well. This movement wanted to convey the message that, if the regime is terrifying women and preventing them from being in the public sphere, our only reply to this attempt is "the street is ours - we are partners in the street and in this homeland".

We talked about the many identities of Dr Magda - one identity is being a leading feminist in Egypt.  El Nadeem was always a feminist Human Rights center. I remember the book published by el Nadeem about a women victim of the Egyptian police.

It was an eye opener and a great reason to be depressed from a long while.

El Nadeem submitted a bill of law to criminalize violence against women and it contained a very debatable article about martial rape.

I asked Dr Magda about the Egyptian feminist movement:

You are a vocal radical voice, and you attempted to change core issues in the Egyptian society, like violence against women and criminalizing it. Did you feel that you were betrayed by the movement? That they did not support you because you discussed a taboo?

They offered me a favour. The media coverage was a great help for the law. I was interviewed by 20 TV channels. I only was annoyed by a cartoon conveying a message that a man and women will sleep in the same room, guarded by a policeman and separated by a fence and it was published on a so called feminist website.

Let me tell you some more facts about Dr Magda.  As well as being a prominent Human Rights activist, she was a one of the leaders of the students movement in the seventies. She was arrested for several times.

Dr Magda, together with her friends, Dr Aida Seif el Dawla, Dr Suzan Fayad and Dr Abdullah Mansor, are the founders of el Nadeem.  At el Nadeem, they utilize their professional knowledge as doctors in eradicating a giant fear for every Egyptian dealing with any police station: Torture.

El Nadeem centre offers legal, medical and physiological assistance to the victims of violence and torture.

I want to show you what el Nadeem is in the eyes of its cofounder.

It is a place where I can achieve my dream of my country, where justice is prevailing.

That dream will never came true if torture is persistent. Eradicating torture is not only a human rights issue, it is an issue to ensure safety of every Egyptian in the public sphere.

El Nadeem is my place to make my dream come true. We started with a cause; we faced many hard times.

It is note worthy that, in 2008, Dr Magda was subject to an attack by a police man, whilst on a mission to help a victim, and her shoulder was fractured.

We also witnessed many good times, like the nomination of Dr Aida Seif el Dawla to be the Special Rapporteur of Torture in the United Nations.

I have to say that I was always inspired by Dr Magda and I consider her one of my mentors; not just for being an activist or a feminist, but also for being the mother of my best friend and a permanent source of support for me and many women of my generation.

How do you feel when we call for a demonstration and your friends and relatives and daughter are there?

I just ask for the safety for everyone. Every change has its tax and we are willing to pay this tax for the sake for a better Egypt.

Still my heart aches with every causality.

I was in the field hospital in Tahrir and the bullets were 1 cm from me, but we have to continue our battle.

Hopes for the future

I will end the interview with this humble heroine by her dreams for tomorrow, how she sees Egypt tomorrow:

I went with you through a very quick interview with Dr Magda Adly, a beautiful Egyptian soul, she and many of her colleagues and students created the tremendous January 25 revolution. Her role is still continuingto make Egypt a better country. This is part of a serious of Egyptian women. To be followed.