Egypt: My Part in the Revolution - Mona Seif 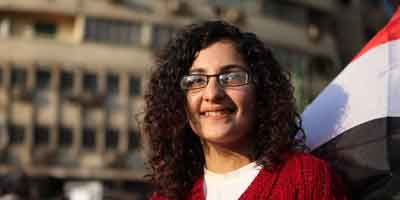 On 11th February, 2011, on the 18th day of protesting, Egyptian revolutionaries forced their dictator to stand down, after 30 years of oppressive rule.

Mona Seif was at the heart of the revolution.

The next day Mona spoke to Chris Crowstaff.

Whatever you are doing now, take time to stop, listen, watch and experience.

An outer and inner revolution.

"People find it hard to believe, but it was really easy to stay positive if you were in Tahrir Square.

Once you step out of Tahrir you get faced with all the other complications of the real world and how hard it is for real. So if you talk to anyone, and I talked to a lot of my friends and they all had the same impression – you basically need to go to Tahrir Square to get this spark of positivity and optimism and then take it out to the world. You really feel like nothing could bring the people who were in Tahrir day and night down.

Even his last speech which really put me in a state of anger, it really took 30 minutes for this anger to disappear because people suddenly turned it into this very positive energy and we marched out of Tahrir Square and we took over the TV building and we took over the presidential palace, so there’s always something positive.

I didn’t try to stop and point out what we (women) did in the whole movement until I was asked frequently about the role women played. Because, from the beginning, I went to demos with women. I went with my friends, my mother, my sister. So I was always surrounded by women. I always saw women I know and I don’t know really getting involved in everything. Even like organising January 25th from the beginning it was from a female friend of mine that I knew about all of the details and arranging the distribution of food, the collecting money, getting blankets, the women arranging the stage from which we announced and we organised stuff, medical aid on the field while people were getting shot at and getting wounded – everything, everything, women and girls were there...

I’ve never really looked for what women could particularly do because I come from a family where women are extremely empowered. The joke in our family is that our women are more powerful than our men! So I always have blind faith and always assume that of course women will play a major role in whatever happens next.

For example, in Khaled Said’s case, the important figure in actually talking to the people and mobilising them was his mother. If you see his mother, she is like a typical Egyptian mother and I don’t think she would have ever been the one to normally take on political battles. But she has been through a horrible incident. She has lost her son. And she has seen how people can rise to this. So suddenly she became a symbol and she is such a great woman. You can’t imagine how moving it is to just see her talk. And so she became such an important figure for all Egyptians. Actually a lot of people call her ‘Mother of Egyptians’.

So I have really seen amazing women and there was no question about even thinking for a second the role of what women play in the movement because they were part of every single detail out there."

Ahmed Seif was one of the victims of Mubarak's rule. He was in prison throughout much of Mona's childhood.

Read the transcript of the full interview