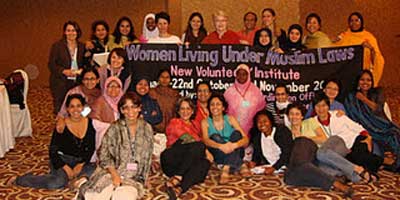 One of my favourite Arab quotes is "Rodo al Fadel l ahlo" or give the credit back to the people who deserve it.

This network is group of women from all over the world whose lives are shaped by laws derived from Islam. WLUML started in 1984, after incidents in many parts of the world in which so-called Islamic laws can be a cause for violating women rights. That’s why different women came along to start WLUML.

The name of the network might lead the readers to think that it is exclusive for Muslim women. On the on contrary. WLUML is a network that consists of women who were born Muslims but do not identify themselves as Muslims, non-Muslim women who live in Muslim countries, Muslims in non-Muslim counties, and Muslims in Diaspora.

WLUML works mainly on offering support and knowledge and in connecting and networking.

I have been always held such values - until the Egyptian revolution came, that was my only way out...  WLUML staff kept calling me and publishing what I wrote, until the internet returned back .

And that conveyed my message and voiced the situation of millions of Egyptian, men and women.

I carry a lot of gratitude to WLUML, where I learn the virtue of respecting different opinions and gained power and energy to fight for my cause whatever happens.

Solidarity is our only weapon.

Have a look on the WLUML website and, if you value their contribution to humanity, please show that through spreading the word and consider a donation.