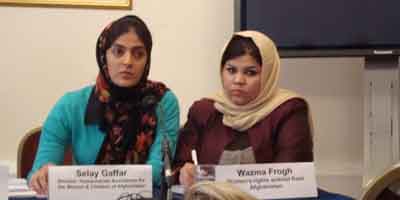 Dr. Lichter is the Australian author of Muslim Women Reformers: Inspiring Voices Against Oppression, which profiles many Muslim women – and also men - around the world who are challenging institutionalised gender discrimination.

Kim Aubrey met with Dr Lichter to ask about her life, work and views:

What led you to embark on your research into this area?

For many years, I lived in a part of North London, near the 'Islamic Centre of England', where there was an increasingly strong Islamic community. I noticed a growing number of women completely covered by the abaya, niqab and gloves, and I wanted to learn more about Islam and women.

After 9/11, when much media attention was focused on Islamists and radical Islam, stories also appeared in the press about secular reformers who were discussing Islam and women's reform. Secular reformers believe Islam itself is the problem and must be transformed rather than reformed.

The media gave a lot of coverage to women like Ayaan Hirsi Ali, a secular reformer who had completely renounced Islam.

However, I also came across many Muslim reformers who believe that reform must come from within Islam.
Although these religious reformers are by far the majority, they have received very little attention.

Some of them use theology to show the Koran is inherently egalitarian but had been interpreted by men in a patriarchal society.
Some reformers protest against discriminatory laws or assist women and girls by providing education and shelters for victims of violence.

These women are the modern suffragettes.

My purpose was to amplify their voices. I also dedicated my book to the memory of those who had died in the service of reform.

Who are the reformers?

The most active are working in Afghanistan, Iran, and Saudi Arabia. A few reformers have moved to the West.

To write a book in such depth requires your own personal sacrifice of your time and energies. How did you manage it?

I felt humbled by the sacrifices of these women reformers.

Quite a few reformers in Afghanistan were doctors like me, but they had given up much of their time to build the country and help other women.

It is difficult for Western women to understand the submissiveness of women under patriarchal dominance? Can you explain something of their state of mind?

Women in many Muslim societies have been subjugated for centuries in order to promote the tribal, patriarchal system that requires male control, particularly in marriage.

This patriarchal system became institutionalized through religious sharia law, which was considered divine and immutable.

According to Lafif Lakhdar, a male supporter of women’s rights from Tunisia: “A great number of Muslim women have internalized the Islamic jurisprudence, which was written by men and for men” and this resulted in the Muslim woman accepting “the view of her executioner.”

How can women reformers overcome the patriarchy?

They want to change gender discriminatory sharia laws through lobbying, debates, peaceful protests, and theological scholarship that spotlights those texts favourable to women, and views the discriminatory laws in their historical perspective.

Scholars are also using ijtihad, or critical interpretation of the holy texts.

In these ways, women can begin to define themselves, instead of accepting the ingrained male definition that bound them to laws sanctioning patriarchy.

Oppression of women has been legitimised and legalised in laws relating to forced marriage, child marriage, polygamy, temporary marriages, unilateral divorce by husbands, child custody to fathers, segregation in public, mandatory Islamic dress, male guardians who control females’ education, leaving the house and other aspects of everyday life; a woman’s testimony in court being worth half that of a man’s, leniency for perpetrators of “honour killing” etc.

Can you give me an example of a Muslim woman reformist who challenges the holy texts?

Wazhma Frogh from Afghanistan is a feisty girl profiled in the book.

A gender specialist who runs literacy programs in rural Afghanistan, she was about to start a program when she learnt that the local mullah had issued a death fatwa and asked the community to kill her.
In a billowing black gown, she went into the mosque while he was giving a sermon and approached him saying, “Can I have five minutes of your time?”

She must have bowled him over because he said yes.

Wazhma then recited five verses from the Koran praising tolerance and equality.

Finally, he patted her on the head and said “God bless you my daughter”.

Wazhma believes that Muslim women must learn how to debate with local mullahs and assert themselves, although she is aware of the perils in challenging Islamic extremists.

What can the ordinary Western woman do to help?

We need increased awareness about Muslim women reformers in the public domain.

In my book, I profile over 100 individual Muslim reformers and organizations.

Most people would be surprised to learn of the many liberal Muslim intellectuals who are opposed to gender discrimination.

Support is needed for some of the active non-governmental organisations, particularly in Afghanistan.
These groups are working hard to promote reform, and assist women and children in practical ways.

For those who want to do more, there are some moves to establish an organization, “Adopt a Reformer” to help people build relationships with individuals, their families, communities and culture.

Reformers’ freedom of speech could be jeopardised by the UN “Defamation of Religions” declaration, which aims to criminalize any criticism of Islam. It is possible to protest against this resolution.

What are some of the obstacles reformers face?

Our media is mainly sensationalist, so extremists have received immense publicity while moderates were ignored.

Many Middle Eastern countries have blocked reformers’ websites and blogs, their major conduits of communication.
Iran has taken a particularly harsh view of the Internet and designated ‘online crimes’ a capital offence.

Some of the restrictions are difficult for us to imagine. These include lack of freedoms such as speech, peaceful assembly or association.

Islamist influence is still very strong in the region despite the recent revolutionary democratic movements. In Egypt, the Muslim Brotherhood has been waiting for an opportunity, and may ultimately gain more power due to superior organisation and deep infiltration into society.

What approaches are the Muslim Women Reformers taking now?

They are becoming savvy users of social media and are trying to co-opt sympathetic men.

Why do you believe it is a good idea to help Muslim women reformers?

There are clear moral reasons, as I have already mentioned.

In the West, we also have common interests with the reformers, like separation of religion and state, and support for international human rights declarations. Successive Arab Human Development Reports have emphasized women’s rights reforms.

Understandably, people don’t want to interfere in other cultures, but we live in a very small world and sooner or later, we will be affected by any gross inequalities.

What are the questions that concern you now?

When I was researching the book I started asking myself:
“Why are we leaving the field open to the extremists when we could be supporting the reformists?"

That question is still foremost in my mind today.

Mysogyny in the Muslim World: Bound by Culture or Religion?

Baha'is in Iran are Easily Forgotten

Campaigning must continue to end stoning

The Veil: Woman's Right or Millstone?