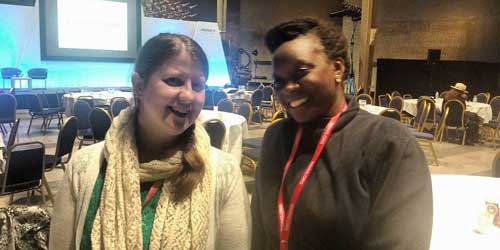 Elizabeth Norman with Victoria Nyanjura - who was kidnapped by the Lord’s Resistance Army at age 14 and spent nearly 8 years in captivity.

On Tuesday 15th and Wednesday 16th of November I attended the RISING 16 Global Peace Forum on behalf of Safe World for Women. The theme of this year’s RISING was 'The Ripple Effect' and just some of the speakers included Dr Joyce Banda, who served as President of Malawi from 2012 to 2014, the secretary general of the Council of Women World Leaders Laura Liswood and father of Malala Yousafzai (and co-founder of the Malala fund) Ziauddin Yousafzai.

While there were a number of different moments throughout the two days that were moving, inspiring and challenging in a variety of different ways, I wanted to share the top five that really left an impression on me:

1. The need for dialogue

RISING 16 came just a week after Donald Trump was elected President of the United States and not long after a very bitter EU Referendum campaign in the UK, both of which have been very polarising – not just in the countries in which they happened, but also throughout the wider world.

Therefore it would have been surprising if the issues surrounding such growing division were not addressed at some point throughout the two days. However, to my pleasant surprise, it was really the need for dialogue between those who think differently to the way 'we' do that was the reoccurring theme surrounding this.

No one was arguing that dialogue would be easy to achieve, nor did they think it would lead to any quick fixes but there was definitely a consensus that it is something many of us have been guilty of failing to do. Whilst it will not be easy, I agree with former executive director on the Islamic Society of Britain, Julie Siddiqi, who stated that it is always ‘better to build friendships than build walls.’

2. The courage and love of Jo Cox and the White Helmets

The first session on Wednesday the 16th was also ‘Love like Jo – reflecting on the Life of Jo Cox MP’, during which people who knew Jo personally spoke of her relentless energy and compassion, along with her ability to bring different people together over a common cause. But more than that they also remembered that she was their friend, a loving wife and mother and it was a truly moving reflection on who she was and what she stood for.

3. Child soldiers and the root causes

'No such thing a a volunteer child soldier' - Roméo Dallaire

Given that my MA thesis was on the use of child piracy, it was unsurprising that the session ‘Fighting the Use of Child Soldiers’, which included a keynote address by Lieutenant-General Roméo Dallaire and the personal testimony from former child soldier Michel Chikwanine, had a real impact upon me.

Dallaire was very clear throughout this session that there is no such thing as a volunteer child soldier, as there is no real free choice for adolescents within a war zone. He was also very strong on the need to tackle the root causes that lead to children being recruited in the first place, as the current international attempt seems to be failing in this respect.

As Dallaire summerised, the number of children being recruited and used by armed groups has not decreased despite the amount of money that has been invested to counter this problem. But both Dallaire and Chikwanine were optimistic that the phenomenon of child soldiering can be ended and they both emphasised the importance of bringing human rights conversations into the classrooms.

The challenges are still not widely recognised

A major focus of the two days was around empowering and ensuring women had the opportunity to be leaders within their own communities.

I found the session entitled ‘The rise of women leaders’ especially inspiring. This was partly down to the very factual, very passionate keynote address from Laura Liswood, but also because the session managed to address and challenge some of the assumptions held by a lot of people in the room.

This was highlighted to me during the gala dinner, when two of the men at my table admitted it had actually challenged some of their assumptions about women in leadership and the barriers they face. Overall, hearing this reaffirmed to me just how important it is that we do keep talking to those 'like us', as well as trying to engage with those who differ, because sometimes even those who believe in the same kind of world view the reality in a different way.

5. Women and girls Escaping from Conflict

Perhaps the most inspiring session for me came towards the end of the two days and was entitled ‘Bring back our girls – the forgotten victims of conflict’.

We heard the CEO of International Alert, Harriet Lamb, and Victoria Nyanjura - who was kidnapped by the Lord’s Resistance Army at 14 and spent nearly 8 years in captivity - speaking about the barriers and issues that girls and women often face when they escape from conflict situations. There was a focus around the celebrations that have happened internationally with the release of some of the Chibok school girls in Nigeria.

While both agreed there was a reason to celebrate, they also stated that they should not be the sense that this is somehow the end of the story. Instead it is the start of a whole other chapter, with many more difficulties ranging from the how they are welcomed back into the community, the physiological and emotional after-effects the girls may experience and the need to address their economic situation.

Nyanjura summed it up well by explaining how people tend to think that when the guns go silent the conflict is over, but for the girls and women who return home it is not. It is just a different kind of struggle and the international community needs to do more to address this, as well as continue to fight for the return of those who have been taken.

Overall the two days at RISING were emotional and exhausting, but also fulfilling and in many ways energising. It helped to remind me that everyday there are people from all walks of life who are striving to make this world a better place and it was an honour that Safe World for Women and myself were a small part of RISING 16 and we look forward to seeing what future years hold in store.