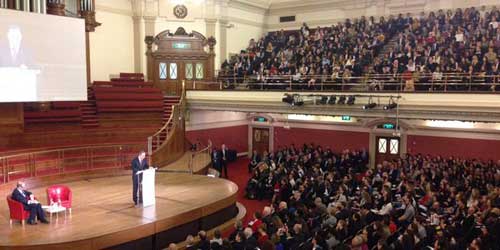 As a 6 year-old, Mr Ban and his family had to flee their home; "life was miserable". Mr. Ban spoke earnestly about how some of his earliest memories were being provided with food and medicine by UNICEF, and books and education by UNESCO.

The UN at 70: Time to Invest in Our Global System

Seventy years after the conception of the United Nations in the wake of World War II and the devastation it left behind, I was fortunate enough to hear from the current UN Secretary General. We were in the very same building where the General Assembly had its inaugural meeting, and where the first ever Secretary General was elected, a generation ago.

The day was about looking back over the past 70 years of the UN and reflecting on how far the institution had come, but perhaps more importantly, looking at the UN’s role in tackling the major global crises we as an international community are currently facing, and how the UN’s role will look going forward.

The following is a report on what the speakers had to say about the UN at 70. 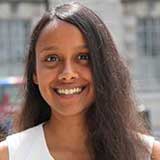 Photo: LinkedinNatalie Samarasinghe, in her address, spoke about the need, now more than ever, for the international community to stand together in the face of the refugee crisis. “The world is too inter-connected to do anything else”, she said. For those who argue that there is no benefit to host countries taking in refugees, Natalie had this to say: that our reward for supporting those in need lies in living up to our values of common humanity.

This was an important reminder to those in the UK, but also to those all around the world affected by the current refugee crisis, as to why we cannot afford to ignore the situation any further.

Human Rights at the Forefront 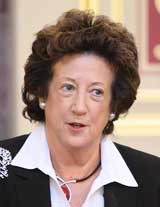 Photo: Wikimedia CommonsJoyce Anelay is currently serving as Minister of State of the Foreign and Commonwealth Office. During her tenure, she has taken particular interest in global issues such as sexual violence against women, for example in Somalia and Sudan.

In her speech, Baroness Anelay spoke of the importance of the UN’s role in accountability, coordination, and development. In relation to the UK, she spoke of the country’s continuing commitment to dedicating 0.7% GDP to overseas development assistance. In this respect, the UK maintains its position as being “at the forefront of global humanitarian protection”.

In order to uphold the vision of the UN and address current global issues, however, all member states need to work together. The Baroness spoke of the UN Secretary General’s “rights upfront initiative”, the programme to make sure that human rights are at the forefront of national and international agendas, and how crucial it is that this programme is deeply embedded. Human rights equality, she argued, are the key to economic growth as well as an “antidote to conflict”.

When speaking of conflict – in particular the ongoing bloodshed in Syria, Baroness Anelay took an unambiguous stance. She spoke of the need to “end bloodshed and establish a balanced political process”, “crush extremist, murderous groups” and then address the inevitable consequences: poverty, displacement, and forced migration. In this, the UN plays a unique role in harnessing the collective will of the member states.

Photo: Wikimedia CommonsSir Jeremy opened his address with a powerful statement: “The UN emerged from the most destructive war in history. We are now returning to a time of global turbulence”.

In order to rectify this, he said, global citizens have a duty to use their increasing voice to mobilise global leaders around modern issues; such as climate change, poverty, and pandemics. The UN’s role as a bridge-builder in the face of issues such as sustainable development, according to Sir Jeremy, is indispensable.

Sir Jeremy then introduced the key note speaker, Secretary General Ban Ki Moon. A long-standing friend of Sir Jeremy, Mr. Ban is known in his role for being particularly passionate about human rights issues, and advocating in particular for LGBTQ rights and tackling violence against women. 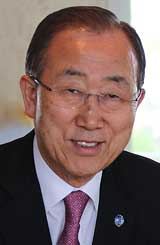 Photo: Wikimedia Commons“I must say, it is a moving experience to be standing at the same podium as the first ever Secretary General did, in the same building as our founding fathers”, was Mr. Ban's opening remark.

Mr. Ban then went on to talk about how the UK has always been a strong supporter of the United Nations, and how this has provided a source of strength and courage. Chatham House, the Royal Institute of International Affairs, is an independent policy institute, and helps to arrange events such as this one. Mr. Ban calls them "one of the world's leading think tanks".

The majority of the Secretary General's speech addressed the major global crises that the UN is currently tackling, such as Ebola, the refugee crises, and the current 100 million people across the globe living in abject poverty. Particularly at the forefront of the room's consciousness are what Mr. Ban called the “savagery” in Syria, and the crisis in Yemen setting the country “on fire”.

Bearing these global crises in mind, the UN estimates that there are 25 million in need of immediate humanitarian assistance. To put this into perspective, if all of these people comprised the population of one nation, it would be the 11th largest in the world.

This is not a figure Mr. Ban talks about lightly: he himself was a displaced child during the Korean war, reliant on the aid of the UN and its agencies. As a 6 year-old, he and his family had to flee their home; "life was miserable". Mr. Ban spoke earnestly about how some of his earliest memories were being provided with food and medicine by UNICEF, and books and education by UNESCO. In this way, the UN provides a "beacon of hope" for people in similar desperate situations.

In terms of “solving” the displacement crisis the world is facing in the wake of conflicts such as the one in Syria, the Secretary General thinks that the refugees flooding into Europe are a mere “symptom” of the political unrests from which they are fleeing, and not, as they have so often been portrayed in both British and international press "a cause of suspicion", which he called a "dangerous myth".

The role of the UN in these situations is in its diplomacy; in starting conversations between warring governments or factions, encouraging productive discussion and using these experiences to inform future preventative measures to stop the same happening again.

It is clear from Mr. Ban's speech that this is the work that he is proud of, but it is also made acutely apparent that this is by no means an easy or straightforward task, and there is no attempt made to deny that there is still an incredibly large gulf to cross before peace can be reached. This applies equally to Syria and Yemen as it does to the UN's peacekeeping missions in Somalia and Sudan.

During Ban Ki Moon's term as Secretary General, he has been particularly passionate about women's empowerment. Indeed, when he claimed that this was one of his “top priorities”, the entire room burst into applause.

Praise which has been well-earned: Mr Ban has appointed over 100 women to high level positions in the UN, and worked closely with Dame Margaret Anstee, who was the first woman to ever be made Under-Secretary after decades of service to the UN. Projects and initiatives such as “He For She” and “Every Woman, Every Child”, demonstrate Mr. Ban's clear passion for greater equality for women, both at the level of providing fundamental rights such as education and healthcare, to promoting women in high-level professional roles.

The international community and international law principles are often criticised in the media in the UK, sometimes suggesting that they hold our government hostage to unattainable standards. It was therefore a welcome and refreshing experience to see the enthusiasm in the room at Central Hall on this day, and the unadulterated excitement of the audience at hearing the Secretary General speak.

This was an uplifitng example of the continuing faith in the power of institutions such as the UN to be a force for good in the world, and the importance of their role in creating peace and ending poverty across the globe. As was so eloquently expressed by all of the speakers, the UN is fundamental in unifying the voice of global citizens from all reaches of the earth to call on world leaders to act in accordance with international law and the will of the international community.

Its organisations and agencies support millions of those in need, affected by war, poverty and disease, every year – a mission that is still as needed today as it was 70 years ago.