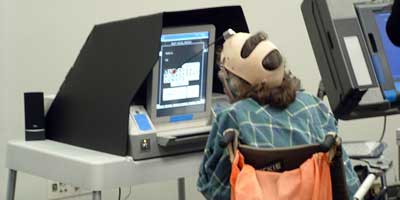 People with Disabilities: Listen to Them & Involve Them in Decisions Concerning their Lives

According to the World Health Organization (WHO), “Disability is an umbrella term, covering impairments, activity limitations, and participation restrictions. An impairment is a problem in body function or structure; an activity limitation is a difficulty encountered by an individual in executing a task or action; while a participation restriction is a problem experienced by an individual in involvement in life situations. Thus disability is a complex phenomenon, reflecting an interaction between features of a person’s body and features of the society in which he or she lives.”

Living under a Cloak of Invisibility

According to the International Foundation for Electoral Systems, “People with disabilities comprise at least 15 percent of the global population, and approximately 80 percent of this population lives in developing nations. Yet they remain largely invisible to the decision- and policy-makers who design and implement government programs.”

'Nothing about Us without Us', by James Charlton, is one of the first books to highlight the oppression and discrimination faced by people with disabilities. It identifies gross similarities between colonialism, racism, and our attitude toward those affected by various types of disability. While the situation of colonialism got better with the fall of the colonial rule and that of racism also improved to a certain extent, disability and the people affected by it continue to face gross negligence and their basic rights are frequently overlooked. In his powerful narration, James Charlton observes self-reliance and empowerment as being tools to fight dependency and powerlessness. Over the years the Disability Rights Movement has gathered momentum with an increasing number of people with disabilities showing conviction that they know what is best for them.

People with disabilities face many barriers to political participation, and many choose not to participate in politics because issues that concern them are often ignored and/or they feel that they have limited power to influence change and decision-making.

Active participation of all segments of the society in political process is an integral part of any functioning democracy. In Pakistan, disabled population still faces numerous challenges, including to register themselves as voters. A news report, “Disabled persons still on margins of society,” published in The Express Tribune notes, “According to the World Bank and the World Health Organization (WHO) estimates, at least 10 per cent of the country’s population are People With Disabilities (PWDs). Out of the roughly 18 million disabled persons in the country, over 5 million live in urban areas, while almost 13 million live in rural areas. Meanwhile, according to the National Database and Registration Authority (Nadra), only 136,928 PWDs nationwide have been registered with the authority.” It is pertinent to mention that a valid Computerized National Identity Card (CNIC) is a prerequisite for registering as a voter in the country.

Self-advocacy and Persons with Disabilities

We all practice self-advocacy in our daily life, starting from a young age, but we hardly realize that there exist certain groups of people who are often forced to live a life unspoken and unheard. People with disabilities form one such group. Self-advocacy is, indeed, an important life skill as it gives you power to form and an idea of your expectations and express your needs. It starts with the ability to think and express your thoughts and feelings, and talk about rights and responsibilities. The main objective of self-advocacy is for you to decide about your choices and also to be ready about the consequences. Self-advocacy does not by any means lessen the need for any required support; rather, it aims at informed decisions made by the individual with full understanding.

On the disability front, self-advocacy is required not only to make self-care plans and for other matters related to individual, but also collectively to practice advocacy for common benefits on policy matters. For people with disabilities, it is a matter of their right to be listened and fully participate in their everyday life.

There is a large number of people with disabilities who do not register at the Election Commission of Pakistan. However, registration with the competent authority is not the only major issue in their political participation.
Often, people with disabilities are willing to vote but face accessibility problems that prevent them from casting their votes.

Inclusion and Involvement: The Path to Decision-making

The aim of any civilized society is to give equal and equitable opportunities to all segments of population, irrespective of gender, cast, creed, sexual orientation, place of origin, or with disease and disability. However, some of these groups face major hurdles in performing functions of daily life, and people with disabilities often top this list.

While a lot has been said about inclusion and inclusive development, people with disabilities usually live in isolation—away from the mainstream—and depend upon their caregivers or family members for performing even the basic functions of life, leave alone making a major decision like schooling, job, or marriage. Therefore, there is an urgent need to educate the masses about the rights of people with disabilities, especially about listening to them and involving them in all decisions concerning their lives (as and when applicable). At the government level, too, it is necessary to implement all the laws and policies in letter and spirit, and provide opportunities to people with disabilities to fully participate in all walks of life and be a productive part of the society. It is time for us to aim for “disability-inclusive development.”