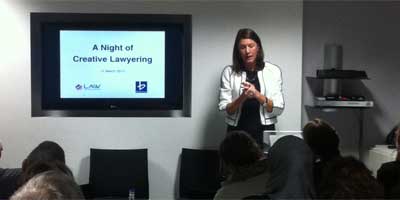 On the 11th March, I attended a talk by LAW (Legal Action Worldwide), a network of human rights lawyers and advisors from around the world, who work together to provide legal solutions to issues in the developing world. The talk, held at Bindmans LLP (London, UK), was titled 'A night of Creative Lawyering', and consisted of a panel of eminent UK human rights lawyers who each gave talks, and then a talk from Antonia Mulvey, the director of LAW, and a video of their breakthrough work in sexual offence legislation in Somalia.

I attended as someone interested in contemporary human rights issues and creative solutions to them, as well as someone trying to break into the legal world, with a belief in the law as a mechanism for progress in the field of international human rights.

One of the speakers due to talk, Phil Shiner of Public Interest Lawyers (PIL), a prominent UK human rights lawyer, was unable to attend, due to the current investigation into allegations that he has been bringing false claims against the UK government, in relation to military involvement in Iraq and Afghanistan, and alleged cases of mistreatment. Shiner embodies the principle of creative lawyering; using the courts as a platform for justice for those who not otherwise have a voice.

His absence was a somber reminder of the risk that advocates place themselves in when they go head-to-head with state authorities, and had a sobering effect on the room filled with like-minded people. A link to a petition condemning the threats made against him is here.

This also highlighted the importance of legal minds and campaigners coming together to do the amazing work undertaken by LAW and working alongside one another, in order to demonstrate that governments cannot prevent issues being raised and tackled. This type of creative lawyering has tangible effects: the latest achievement of LAW is the drafting of the first ever bill of sexual offences in Somalia.

Sir Geoffrey Bindman, later in the event, with Antonio MulvevThe first to speak was Sir Geoffrey Bindman QC (Hon). He spoke of creative lawyering as viewing legal representation as a 'vital obligation' of all those in the legal profession. Most people, he explained, would view a lawyer's job as a passive one, merely to represent someone who has brought a case to you. This, however, is not the case, as Sir Bindman continued, and lawyers, in his view, are obliged to actively seek and pursue remedies for those who have suffered injustices.

He talked of his own involvement in the landmark Pinochet case, concerning the Chilean dictator. This case concerned a demand from the Spanish government for the UK to extradite Pinochet to Spain in order to face charges of torture and murder. Sir Bindman represented Amnesty International in what he remembers as one of the first cases where a third party campaign group were actively involved in a case. Realising that there was an important point that had not been raised in the case thus far, Sir Bindman directly petitioned the House of Lords, and on the same day was contacted back to be told that he had been successful. This is a prime example of what LAW means by 'creative lawyering'; brilliant minds working to find creative solutions, using initiative to set the motion in place, and through this way making an impact on the legal landscape.

Saimo ChahalNext to speak was Saimo Chahal QC. For her, creative lawyering means choosing cases with wider public significance, such as her work in the case of Nicklinson, concerning the highly controversial grey area of assisted suicide and Article 2 of the ECHR (European Convention of Human Rights). In bringing these cases, advocates can not only provide representation for individual client, but also contributed to the development of human rights law.

Richard Hermer from Matrix Chambers, a renowned human rights set, was next to speak. He spoke of lawyering as just one of the ways in which campaigners can effect change. Hermer sees the law as evolutionary, not revolutionary, and in that sense slow change through the courts may be frustrating to some. He advocated a holistic and flexible approach, therefore, encouraging human rights campaigners to use all means available to them.

Bringing a case when the courts are not willing to make changes to the law can in fact set back progress, argued Hermer, and therefore the ability of a lawyer to judge the climate of the courts is a keys skill.

Antonia Mulvey (founder of LAW) then spoke about the work LAW does. She described the organisation as a 'non-profit network of human rights lawyers and a think tank', working largely in conflict-affected areas. In countries where it is very difficult for individuals to access legal representation, there is as a result a high level of impunity for human rights violations by the authorities. Mulvey spoke of a widespread desire for accountability at a grassroots level in countries such as Somalia: in this specific context, victims of sexual abuse want their attackers to be held to account.

There is endemic sexual violence within the security forces in Somalia, including the police: an estimated 30-40% of attacks are carried out by armed men. This explains in part the shocking convictions statistics: over the last two years, of 44 reports of sexual violence, there has been only two convictions. Six of these women who reported were then arrested for defamation.

Mulvey talked about the reasons for this tragic situation: there is still a large stigma attached to reporting sexual violence. LAW has been working over the recent years and has been integral in the development of the countries' first ever sexual offences bill, which contains the first legal definition of rape in Somali history. This bill also introduces for the first time a duty on the authorities to properly prevent and investigate allegations of sexual violence. There are also separate offences created for attacks on children.

LAW has also been working at the grassroots level on an accountability project for the last year, in the Somali capital of Mugodishu. In the city there has been the first high-level panel to specifically address the issue of sexual violence and accountability; a success in itself in its acknowledgement of the severity of the problem.

Solutions have been discussed, and has resulted in an official UN statement that sexual violence in will not be accepted. One of the solution to result from this panel is the establishment of an independent complaints mechansim. LAW's work demonstrates the huge progress that can be made by working with communities at the grassroots but also in developing legal infrastructures.

The room was shown a fantastic short documentary of the progress of this campaign in Somalia, which drove home the need for effective legal systems, and the desire of individuals for access to legal representation, in order to protect basic human rights.

A law to protect people from sexual violence is something many in the developed world may take for granted; it would be easy to assumed that of course this framework is in place. Where it is not, as it has not been in Somalia, women and children have been raped by the very people supposed to protect them, and there is nothing they can do to receive justice.

The work LAW do goes a long way to changing this in many areas around the world, and highlights just how important a lawyer's active role truly is.