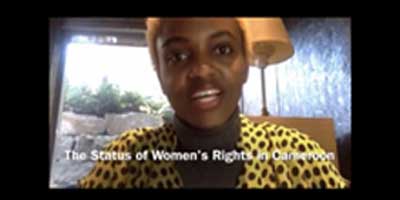 A Journey About Gender Studies

Colombia is passing through a period of post-conflict so, during the four days' journey with panelists from all over the world, we had a special conference day about women and post-conflict, trying to find out how to bring women together to effectively bring peace.

We had the pleasure to count among us some Safeworld partners and colleagues speaking about their experiences; raising their voices was a gift that impressed everyone at the conference.

Colombia: Researcher Dhayane Fernandez told us that Colombian refugee women are survivors from the Colombian conflict and sexual violence as a mechanism of control. Colombia lived through a conflict with the so-called FARC (Fuerzas Armadas Revolucionarias de Colombia).

According to the United Nations report:

“The Farc is the oldest and largest group among Colombia's left-wing rebels and is one of the world's richest guerrilla armies. The group's roots can be traced back to the Liberal guerrilla bands of La Violencia – the civil war between the Liberal and Conservative parties that raged from 1948 until 1958.

Farc became disillusioned with the leadership of the Liberal Party and turned to communism. (…) Experts estimate that FARC takes in between $500 million and $600 million annually from the illegal drug trade. The FARC also profits from kidnappings, extortion schemes, and an unofficial 'tax' it levies in the countryside for 'protection' and social services.  (… )

According to a US Justice Department Indictment in 2006, the Farc supplies more than 50% of the world's cocaine and more than 60% of the cocaine entering the US.

Recently, the Farc, which is on US and European lists of terrorist organisations, has suffered a series of blows, including the deaths of several top commanders.”

At the time we were hosting the meeting, the Farc was enaged in a peace process with the government.

This day featured a special conference entitled: “Women victims of war: resilience, experiences and proposals to make peace by women’s participation. The keys to understand decide and change it”, which I was coordinating.

Our Safe World Field Partners and colleagues were asked to take part into this new chapter in Colombia's history.

In the moments that we started showing the videos they prerecorded for us, the audience did not take their eyes off the videos. It was a very special moment to be living a transitional historical Colombian moment of post-conflict and having special guests talking about their experiences in Africa, India and Israel, sharing their visions of peace and post-conflict.

Bahati Valerie from the Democratic Republic of Congo, co-founder of COFAPRI - “COFAPRI empowers Congo women and children victims of war rape and domestic violence to remake the lives peacefully”

Rozina Khanam, from Bihari-India and former executive director of Patna Educational & Vocational Centre - “The struggle for empowerment, security and peace of Bihari Women”.

This day began with some Latin American researchers talking about post-conflict situations in Colombia and Venezuela. Our Safeworld speakers brought to the conference their visions about their own conflicts, and this was very important because we could discuss how those experiences could relate to the Colombian case.

For all the people present there, it was a very intensive moment to know that somewhere in the world, women are working together to bring peace to their own countries.

COFAPRI’s video surprised the conference audience because its own simplicity of working in a very hard region, full of conflicts, with so many difficulties. Bahati was an example of determination, just like our amazing Zoneziwoh bringing her professionalism and her courage to persevere, to step forward in every situation.

Next we had our panelists who talked about women in India (Simram and Rozina) and how to keep a resistance movement sustained, and then we had Irit who brought a little bit of tension because of the entire Palestian-Israeli panorama, but with her wise words she let all her passion for peace and resolution be clear to the audience.

It was a wonderful multicultural class that we had the opportunity to assist.

For Red HILA, it was an honour having those brave women panelists with us.