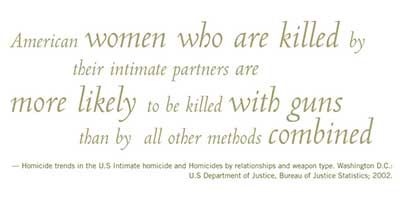 According to Rutgers, Center for Women's Global Leadership, there are approximately 900 million small arms in the world today and more than 75% of them are in the hands of mostly men who are private individuals. A sad fact is that the greatest risk of gun violence to women is not on the streets or in war zones, but in their own homes.

The largest number of victims killed, injured or threatened with firearms each year are women. Most deaths occur at home by a current or former partner. Most of the firearms used are legal and most of these weapons are handguns. Handguns are used over shotguns and rifles.

A survey based on data from 111 countries published by the Swiss-based Geneva Graduate Institute shows that about 66,000 women are killed each year and 60% of these deaths occur from firearms. According to the survey, many cultures tolerate and accept the use of violence against women with common notions of gender inequality.

In South Africa and France, one in three women killed by their husbands is shot. In the USA, the number is two in three. Incidents of domestic violence involving guns are much more likely to result in the death of the victim than those involving other weapons or bodily force.

According to Josh Sugarmann, executive director of the Violence Policy Center, more than 1700 women are murdered each year in the US by men with guns. Guns are being used to take the lives of women, not to keep them safe. Nearly all of these murders (87%) are not related to other crimes such as rape or robbery. Each week in the US, approximately 9 women are shot to death by their husbands or partners.

A gun in the house increases the chances that a woman will be killed. One study, according to Sugarmann, found that women were 3 times more likely to be murdered in a home with a gun than in a home without a gun. According to Reuters, guns plus a history of domestic violence or stalking lead to increased risk of death to women.

In the 1990's, the US Congress recognized the risks posed by abusers with guns. Legislation was passed prohibiting people convicted of domestic violence from possessing guns; however, these laws have significant loopholes that allow abusers to acquire guns legally. Currently, there are bills still in committee that, if passed, could better protect women. Congress must pass stricter laws to make the US a safer place for its female citizens.