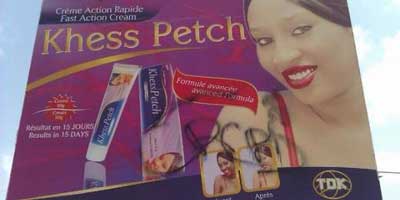 There was nothing conspicuous about me when I walked into Coventry’s biggest Afro-Caribbean beauty shop. After all, I am an African woman. I walked past the hair extensions, weaves, accessories and hair care products before I finally found what I came for. With a whole aisle dedicated to skin ‘whitening’ products, there was no way of missing it. However, I was looking for something much more specific than skin whitening products. I was looking for the ingredients, ‘corticosteroids’ and ‘hydroquinone’. A cancer-causing bleaching agent, hydroquinone-containing products have been illegal in the UK since 2001 while corticosteroids, although not banned, can cause high blood pressure and hyperglycaemia if used excessively.

Speaking to the owner of the shop who, surprisingly, is Middle-Eastern, I learnt the difference between whitening creams and bleaching creams. The latter contains hydroquinone; the former does not. At the high cost of £26.99, ‘Fair & White Paris’ is the most expensive whitening cream in the shop. It is also the most popular. According to the owner, it is purchased not just by African women, but also by African men buying it for their wives and girlfriends. Here lies one of its problems.

In 2012, global healthcare company Sanofi launched “Asia’s number one feminine wash brand”, Lactacyd White Intimate, in the Philippines. This is according to Manila Standard Today, a newspaper in the Philippines. The article stated that Lactacyd, “is the only feminine wash that combines effective cleansing and protection with a gentle natural whitening action in the bikini area.  Lactacyd White Intimate was developed to address the darkening of the skin in the bikini area, a need expressed by different women all over Asia. With Lactacyd White Intimate, the clinical studies have shown lightening of the intimate area within four weeks.”

The first vaginal wash launched in the Philippines, what surprises me is that Lactacyd is manufactured and marketed by the world’s fourth-largest pharmaceutical company, Sanofi (according to the company’s 2012 annual report). Could it be that their desire for profit overrides their necessity for a respectable image? Or could it simply be explained by post-colonial greed? Marketed solely in Asian countries where dark skin automatically equates disrespect, unattractiveness and a lower social class, Sanofi’s ‘respectable’ image is thereby not tainted in the Western world while it continues to enjoy profit made by mass exploitation. It’s no wonder in 2011, it made a turnover of €33,389,000,000.

Over the years, as a black woman, I have witnessed many online debates about skin colour and its relation to beauty. Like the skinny versus obese debate, controversy only ensues when those considered inferior have forced upon them a Westernised standard of beauty. Aishwarya Rai, Beyoncé and Gabourey Sidibé (women who all come from African and Asian backgrounds) have all been in the media limelight under the headline, ‘Skin Lightening’.

The Slave Trade and Demand for Mulato Women

When I watched videos of young black men choosing light-skinned black girls over dark-skinned ones, my first reaction was to scoff. What do I know? I’ve always been protected from this backwards idea because I lived in areas where it never really mattered much. In the UK, and in some parts of West Africa, a woman is beautiful because she is beautiful – her skin tone does not come into question. My second reaction was sadness because this ignorant belief stemming from the slave era was living, breathing and strong enough in the black community to destroy many women’s self-esteem.

During America’s slavery era, among the very many inhumane injustices carried out by the slave owners, there is one that continues to affect the black population of the world today. That is, the rape, the prostitution and the desire of mulato (mixed-race) women. With each new wave of slaves that arrived on a farmland, the slave master would choose the most beautiful, most desirable woman from his property. She would always be the lightest, most “white” looking. As the community of mixed-raced, illegitimate children increased, so did the mind-set of the slave community. Abused, mistreated and deprived of their humanity, each slave would end up with a mentality broken and remoulded by the white man’s whip. In this way, the white man became God and all his ways were copied in a pitiful attempt at assimilation and survival. Therefore, if the white man declared that a fairer skin was better, more beautiful and more desirable, the black man thought so too. Our twenty-first century world is a diverse community of people still dealing with the effects of colonialism. We are living the post-colonial century. 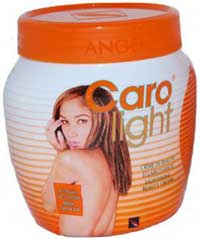 In June 2011, Caro Skin Lightening Beauty Cream was recalled in the UK and all over Europe. The product posed a chemical danger because “it contains 4.67% of hydroquinone as a skin-lightening substance which is prohibited by the Cosmetics Directive 76/768/EEC.” The African beauty salon at my local bus station still sells Caro Skin Lightening Beauty Cream which still contains hydroquinone. According to the ‘recalled products’ website, the cream originates from the Democratic Republic of Congo, a country that has its fair share of dark skinned and light skinned people. It comes as no surprise then that the woman used to market the cream is a light skinned, biracial-looking woman.

If the Western philosophy states that, ‘women are their own worst critics’ then does that mean that these women are to blame? Surely it’s their own fault for wasting huge amounts of money buying creams that damage their skin just to maintain an unrealistic and hegemonized form of beauty? But what is the difference between a white woman who believes a tan makes her more attractive and a black woman who thinks a paler skin is more beautiful? For years, as a child, I was convinced that long, straight hair meant a woman was more beautiful. My mother would relax my hair because it made it more manageable but it would never grow past a certain length. If only it would grow longer, then I would be more beautiful and highly respected (even feared) by others. 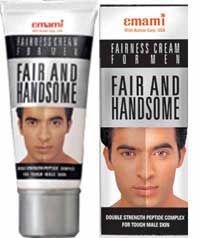 From birth, African and Asian women are praised, adored and respected for their light skin or rejected, abused and mocked for their dark skin. Peer pressure does not end in school as we are taught. It permeates every aspect of society and explains many unexplainable societal problems. The beauty industry has not created this inferiority complex; it has simply built itself on it. There is always something wrong with a woman, and there is always some beauty product and service out there to make what’s wrong in her life right.

And now, the male market is being exploited. Fair and Handsome, a skin-lightening cream has been promoted in recent years by Bollywood film star, Shah Rukh Khan. The cream’s manufacturer, Emami, claims that it makes “skin fair and handsome in 4 weeks”.  Emami’ numerous television adverts exploit a central theme: an Indian man is only handsome and can only be popular and rich if he is light skinned.

On social networking sites such as YouTube and also private blogs, the African and Asian community are outspoken in their criticism against skin-lightening and skin bleaching. But this criticism stems from those in the Western world. Sadly, the voices of the developing countries refuse to question why they must have white skin. Jacelyn, “a Singapore based beauty, fashion and lifestyle blogger” wrote a paid review for Lactacyd White Intimate in September 2012. She also created various memes promoting the product.

Growing up in Nigeria, I remember the spiteful ridicule that was reserved for women who used bleaching creams to alter their appearances. Yet they continued to use these creams because their skin became dependent on it. "Initially, [the bleaching cream] will appear to lighten the skin," Sujata Jolly, a dermatological research scientist says. "The reaction between the sun and chemicals triggers an oxidation reaction, which then starts turning the skin darker ... and as the skin gets darker, one uses more cream more vigorously.

Ms. Jolly’s work in the 1980s and 1990 led to hydroquinone being banned in over-the-counter preparations in the European Union. In Africa and Asia, bleaching and whitening products continue to be sold openly and profitably. Women, and increasingly men, continue to purchase these products to make amends for their societal failures as dark skinned people. In India, these people, known as ‘Dalits’ are considered ‘Untouchables’. An article in the National Geographic states that, “India's Untouchables are relegated to the lowest jobs, and live in constant fear of being publicly humiliated, paraded naked, beaten, and raped with impunity by upper-caste Hindus seeking to keep them in their place. Merely walking through an upper-caste neighbourhood is a life-threatening offense.”

In Arab nations, there lives an unspoken community of slaves, mistreated and abused by those who believe that black people were born to be slaves. Mende Nazer tells her story of being sold into slavery in her memoir, Slave. And among black communities worldwide, there thrives a constant and growing pressure for black women to look more ‘white’ be it by changing their hair, their body, their skin or their identity.

Education and Empowerment are Needed 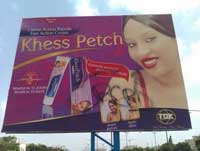 In September 2012, online petitions against Khess Petch, a brand new skin whitening cream advertised in Dakar, Senegal, were submitted to the Senegalese Ministry of Health} Dr. Dele Olajide, a leading psychologist at King's College London, blames consumer demand on the media focusing on fair skinned blacks like American singer Beyoncé and British actress Thandie Newton. "The image that the media presents about black people is that we are inferior, we are not as good as everybody else. But those who are successful and going places are those who are light-skinned people.

Although illegal in the UK, skin whitening and bleaching creams, soaps and even medicine can be purchased very easily in beauty shops and online. It is no longer a matter of inviting those in power to ‘do something about it’. How can they change centuries and centuries of colonial ideology in one generation? Perhaps mothers and father should take a stand and praise the individual beauty of their daughters: whether light-skinned or dark. Perhaps husbands and boyfriends should take a stance and refuse to believe the hegemonized version of beauty they are force-fed through the media. And perhaps women themselves should shake off their almost-generational inferiority in terms of their physical beauty. But that would require the empowerment of women still subject to the will and desire of the financially-powerful man. To empower them would be to educate them. Knowledge is power.

Lola Johnson is a second year Film and Media Studies student at the University of Leicester.

"I was born in Lagos, Nigeria; a city of living chaos...

Every woman in Africa is born weak. Life teaches her strength...

Yet, the more I read and live, the more I see that all women are mules of the world. For me, it is not about strengthening or empowering women, as we already have both qualities. For me, it is about breaking free from the cage that man, society, culture and tradition have built around us."