Taking a stand for teachers on UN World Teachers’ Day 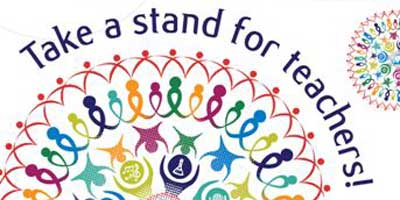 (WNN) Los Angeles, California, UNITED STATES: Recognizing teachers worldwide for October 5, 2012 on the United Nations (UN) World Teachers’ Day societies around the world celebrate the vital contribution that teachers make to human development and the role teachers play in providing quality education at all levels. It’s a time we can take time to appreciate the contribution of all teachers locally and globally. It is also a time to mobilize support for teachers insuring that the educational needs of future generations are met.

“Education is one of the most important gifts we can bestow on the next generation,” said Guy Ryder, Director-General of the International Labour Organization (ILO) Office recently. “Children who are in school have a better chance of avoiding the trap of child labour, and when they grow up and have their own children, children of educated parents have better nutrition and better care,” Director-General Ryder continued.

In 1966 the Special Intergovernmental Conference on the Status of Teachers at UNESCO in Paris, France created a new international initiative for the first time. It was then that the “Recommendation concerning the Status of Teachers” was signed at the United Nations. Twenty-eight years later, in 1994, the first official ‘World Teachers Day’ was held.

This year’s theme is a timely call for all of us, especially those of us who are now living in the United States. Globally, the rise of religious extremism from all religions, the privatization of public education, and the tightening grip of economic stress makes the slogan ‘Take a Stand for Teachers’ more important than ever. Today’s global growing gap between the rich and poor makes education less accessible for economically marginalized families. Increased militarization and allocation of s significant portion of government budgets to military programs deprive public education of the needed resources to educate our children. These are only part of the barriers.

Today the profession of teaching is losing status in many parts of the world. “Taking a Stand for Teachers” is calling attention to the great need to raise the status of teachers everywhere – not only for the benefit of teachers and students, but for society as a whole, to acknowledge the crucial role teachers do play in building our future.  This year the 2012 World Teacher’s Day draws attention also to an important issue. How we can attract top graduates to join the profession of teaching? And how can raise the status of all teachers together?

While there are similar patterns and challenges that all teachers are facing globally, ‘Taking a stand for Teachers’ does means we have different specific issues to work on for different countries.

‘Taking a Stand for Teachers’ also means taking different actions to help teachers who are citizens of societies where human wrongs are the part of the dominant discourse; where freedom of speech is just an unattainable concept; and where true conscientious teachers are being subjected to expulsion or exiled as they are denied their rights. These rights include: the right to be organized in a union; the right to be free from imprisonment or to be silenced; the right to be free from becoming one of the disappeared or the executed.

Taking A Stand for Teachers Iran

A montage of Iranian teachers who are now being detained in prison with a plea for their release also shows a boy student writing on a blackboard in Iran. Image: Didar e Sabz/ISNA/PayvandTaking a stand for Iranian teachers brings us a new initiative which calls for the social and political rights of all Iranian teachers, especially for thei human rights to have a safe environment in their classrooms clear of any security spying apparatus.  ‘Taking a stand for teachers’ in Iran means demanding the immediate release of nearly 40 teachers who are now imprisoned in Iran for their lawful participation in teachers association campaigns.

This means we must demand an end to the persecution and prosecution of teachers who have been exercising their basic human rights to freedom of assembly and association. It also means providing a supportive environment for teachers who are women. And addressing the economic needs of all teachers according to the national and international labor laws under standards set by one of the partners of ‘World Teachers’ Day’, the ILO.

‘Take a Stand for Teachers’ means removing gender barriers for more than 570,000 women teachers inside Iran. It also means an end to the gender social engineering that is now happening in higher education in Iran. The Iranian government with the regressive notion of curbing the prominent presence of women in higher education (which is more than 60 percent of post-secondary students) has embarked on a number of educational policies using antiquated gender roles and the most regressive interpretation of Sharia laws.

Consistent with the existing global pattern, women in Iran make-up a large number of teachers, particularly in elementary schools. The most recent numbers by the Ministry of Education in Iran show that the agency now employs 900,000 people, which is 25 percent – the largest section – of the government employees.

In Sept 2012 ISNA  – Iranian Student News Agency reported that Iran Assistant Secretary of Education Mr. Sahar Khiz announced that 70 percent of the students who will be admitted to colleges that train students to become teachers in Iran will be male students, a reverse of Iran’s affirmative action measure. It should be mentioned that currently out of the 900,000 teachers in Iran, 570,000 are women.

The global pattern of privatization of education has also has its mark in Iran; a country that based on the letter of law reflected in the constitution k-12 education should be free of charge and public.

According to Iranian newspaper Etemad, currently 900,000 K-12 students are enrolled in private schools (since it is unlawful to have private schools in Iran all these institutions are established as non-profits!!!!).  This number of schools represent 8 percent of the total students enrolled in K-12 in Iran.  Kindergarten is also not being offered publicly.  The growing economic crisis, which includes the imposed economic sanction and the constant devaluation of Iranian currency, all contribute to the fact that not only the children of people below poverty line but also the middle class of Iran, in most part, are not currently able to afford sending their children to kindergarten.

So the challenges facing Iranian teachers are many. This year the initiative ‘Be the Voice of Iranian Teachers‘ demands the immediate release of nearly 40 teachers in Iran who have been detained, imprisoned and harassed by Iranian officials since 2009. Noble Peace Prize Laureate and human rights activist who is also behind ‘Be the Voice of Iranian Teachers’ Dr. Shirin Ebadi, recently told the Campaign for Human Rights in Iran that fearing persecution by Iran’s Intelligence Ministry has caused some families to refuse to list the names of their relatives who are imprisoned teachers. Instead the published list of imprisoned teachers is now just a partial list.

Let us also ”Take a Stand for Teachers’ in the United States for those who struggle for economic rights and the war waged against public education and public employees. Let us take a stand for the teachers in the city of Los Angeles, California for demanding that teachers not be laid off as a solution for over populated schools.

Let us stand for the teachers in the city of Chicago, Illinois for their demands for better staffing in schools, as well as equitable distribution of resources between schools, smaller class sizes and for equal and appropriate pay compared to other professionals in the U.S.

Let us take a stand for the 4,700 teachers and their union in the State of Wisconsin, who have resisted a state court order that restricts public workers’ collective bargaining rights.

The attack on teachers and public education is part of a social counter-progressive movement against the working people and economically marginalized people as a whole.

I would like to echo the words of UNESCO’s Director-General Irina Bokova when she praised the value of teachers who said, “On this day, we call for teachers to receive supportive environments, adequate quality training as well as ‘safeguards’ for teachers’ rights and responsibilities… …We expect a lot from teachers – they, in turn, are right to expect as much from us. This World Teachers’ Day is an opportunity for all to take a stand.”

I would like to dedicate this article and my advocacy for dignity and rights of teachers globally to my parents, my two aunts and two uncles who served the public education of Iran for their entire careers. Collectively they served for more than 180 years! Specifically I want to dedicate this to my mother, who is now 92-years-old, and who retired after 30 years teaching the first grade going back after a year in retirement to teach another 6 years without any additional compensation just because she loved the profession.

_____________
WNN encourages conversation. All opinions expressed in WNN SOAPBOX belong to the author and do not necessarily reflect the opinion of WNN – Women News Network. No part of this commentary (op-ed) may be reproduced without prior permissions from WNN &/or the author.

©2012 WNN – Women News Network
No part of this article release may be reproduced without prior permissions from WNN.