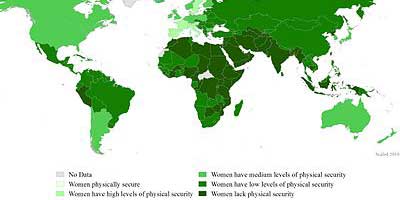 BANGKOK (TrustLaw) – The world should tackle violence against women as a major crisis, using lessons from how it has got to grips with HIV/AIDS, says an official with UN Women.

"How did we fight HIV/AIDS? Both at the country and international level. There was a clear understanding that we cannot fight it alone, that we have to label it as a crisis. Not just a health crisis but a much larger one,” said Saraswathi Menon, director of policy for UN Women, the United Nations agency for gender equality and women’s empowerment.

Civil society also teamed up with government agencies, enabling NGOs running successful projects on limited resources to scale them up with state help.

The concerted efforts have reversed the spread of HIV/AIDS in many countries, including Thailand, where Menon participated in a gathering of women’s rights experts last week to discuss ending violence against women.

Governments have signed numerous conventions and agreements to stop gender-based violence, but implementation and results have been underwhelming, Menon said.

"If we are to address the root causes, it cannot just be a problem for women or women's ministries alone. It has to be addressed by all parts of societies – government, civil society, families, communities,” she told TrustLaw.

"Prevention really means putting a stop once and for all. It’s not just dealing with the consequences of the violence,” she added.

Globally, 139 constitutions include guarantees of gender equality and 125 states outlaw domestic violence. Women have equal rights to own property in 115 countries and equal inheritance rights in 93 nations, according to UN Women.

Yet up to 7 in 10 women across the world have faced some form of violence – whether physical, sexual, psychological or economic - during their lives, according to Menon.

“Violence against women and girls is the single largest form of violence of any type, including armed conflict,” she said. Yet because it tends to happen within the home and is rarely exposed to the public gaze, people tend to misunderstand the severity of it.

"I think there really is impunity in this area,” Menon said. What is needed is “zero tolerance” and governments to not only make promises on paper but also fund prevention programmes and follow through on their commitments, she argued.

Menon described the common perception that violence against women and girls is culturally determined as “a myth”.

Violence against women will not end until people recognise that it is “unconscionable” and “cannot be condoned in their society, in their community, in their family”, she added. "If you know violence is occurring, it's as much your responsibility as anyone else’s."