Ignored and Hidden: Violence Against Women with Disabilities 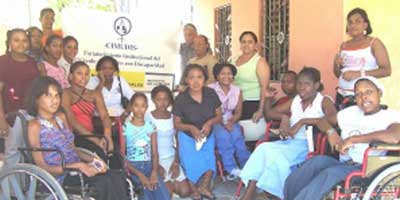 Women with disabilities attending the '1st Regional Meeting of Women with Disabilities to Strengthen Leadership, Alliances and their Participation in Latin America' (photo courtesy of AWID, 2006)

“My husband beat me seriously. He beat me intentionally many times, when he came home drunk. He beat me because of my disability.  He said to others that I was useless, could not make love, or cook.”

“not completely human and of less value….  The absence of representations of their identity favours the perception that one can abuse them without remorse or conscience.”

Lack of respect for their personhood and discrimination against persons on the basis of their physical or mental disabilities is an act of violence in itself, says INWWD, and generates intense frustration in the person who experiences the discrimination.

Violence against women with disabilities is not always visible.

It can occur in the form of legal compulsion, economic coercion, intimidation, psychological manipulation, deception, and misinformation, and in absence of free and informed consent – especially in medical matters.

Medical treatments of an intrusive and irreversible nature which lack a therapeutic purpose, are not aimed at correcting or alleviating a disability, and which are enforced or administered without the free and informed consent of the person concerned,  may constitute torture or ill-treatment of persons with disabilities, according to INWWD.

These “treatments” include: forced abortion and sterilization, forced psychiatric interventions, involuntary commitment to institutions, and forced or “unmodified” electroshock (electro-convulsive therapy or ECT).

Unfortunately, many of these acts of violence  are often done under the legal authority of the state, and are accepted by society, particularly in instances of forced psychiatric interventions and institutionalization.

The term "violence against women" means any act of gender-based violence that results in, or is likely to result in, physical, sexual or psychological harm or suffering to women, including threats of such acts, coercion or arbitrary deprivation of liberty, whether occurring in public or in private life.

"You are useless. You are a waste of food. You should just die so that others can eat the food."

– Words of the people in a displacement camp told to a disabled woman, northern Uganda

More than 20 years of displacement and war have caused approximately 20 percent of Ugandans to have disabilities, according to Human Rights Watch.

Though there is a lack of data on the number of women with disabilities in the country, this population is probably higher in northern Uganda where rebels of the Lord's Resistance Army  have waged war on the government for over two decades.

Many women lost the use of limbs due to landmines or gunshot wounds, were mutilated by rebels, sustained injuries in fires, or were never vaccinated for disabling illnesses such as polio.

Today, women with physical, sensory, mental, and intellectual disabilities face a more complex and grueling process of return and relocation than their neighbors: they are subject to social stigma, sexual violence, denied access to justice, and their reproductive and maternal health needs are often not met.

"I was raped three times in this house one week ago. The man came at night, so I was unable to recognize him. I have not told anyone, not even my mother.

I was thinking of bringing a panga [machete] to bed with me in case he comes again. I fear that if I report, then I will need to know my HIV status. I want to check my HIV status at a health center but I do not have transport to town. The hospital is far and my [hand-crank] bicycle is broken.

Others in the community will say that it's my fault, and that I run around with men."

Government plans are failing to take into account the needs of the women who acquired their disabilities due to the war, or who already had disabilities before the war and may have disproportionately suffered the impact of the conflict.

Many women with disabilities who wish to leave the displacement camps and return home are physically unable to do so. Many lost family members and cultural expectations that persons with disabilities, especially women, cannot live independently , make it difficult for them to leave the camps and access social services on their own.

Human Rights Watch notes that discriminatory attitutes remain a major barrier to full inclusion of women with disabilities in efforts to build a functioning society.

Prior to the war, relatives and community members customarily supported persons with disabilities. But now, war has displaced the population and eroded community support. Amd women with disabilities are often excluded from community meetings and rarely take any part in decision-making on important issues like the return process or public health.

Uganda has an obligation to protect its disabled population, particularly women with disabilities, from all forms of discrimination – it is a signatory to three treaties: the Convention on the Rights of Persons with Disabilities (CRPD), Convention on the Elmination of Discrimination Against Women  (CEDAW), and the African Charter on Human and Peoples' Rights. – Human Rights Watch

Greensburg Man Parks Car, Goes Back Later, Finds Her In Garbage Can

"She was exploited," said Jennifer Daugherty's sister, Joy Burkholder. "Her kindness and handicap made her vulnerable. She trusted anybody. The people who did this had no regard for human life."

Six people are charged in connection with the brutal assault and murder of a mentally challenged woman found wrapped in plastic and stuffed inside a garbage can in a school parking lot in Greensburg, Pennsylvania.

Daugherty, 30, suffered multiple stab wounds, and was bound with Christmas  decorations and clothing in an apartment, before being moved to a middle school's parking lot.

Joy Burkholder said her sister knew some of the suspects and considered them to be her friends.

The criminal complaint states that she was tortured over a span of 36 hours. Investigators said Daugherty was struck with a towel rack, vacuum cleaner hose, and a crutch stabbed in the chest, side and neck. Her hair was cut and her face painted with nail polish, and she was made to eat or drink vegetable oil spices, detergent, urine, and medications.

Police also said Daugherty was forced to write out a contrived suicide note that was dictated to her.

"Her death was not an accident. Every action of her murder was conscious," Burkholder said. "It was cold. It was brutal. She was tortured, she was humiliated and she was alone when she died."

The district attorney has not yet decided if he will make this a death penalty case.

"I don't really know if there is anything in this life or the afterlife that I really could feel would be justice," Burkholder said.

“I want to insist on the importance of self-respect –  of the most important weapon that every woman, independently or regardless of their abilities, can have to escape from violence: we have to say NO to violence, and to break the silence"

Gender and Disability: Violence Against Women (on gender and disability, and the ways in which women with disabilities experience violence.