Do Guns in Peacetime Make the World a Safer Place? 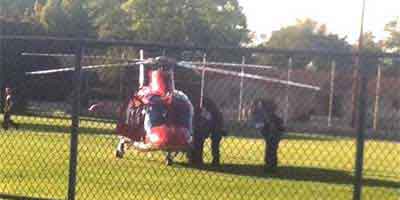 17th July 2012: A two-year-old Colorado boy being placed on an air ambulance after shooting himself with his grandfather's handgun, on a family visit to his grandparents' home. The boy was pronounced dead on arrival at the hospital. Photo: thedenverchannel.com

On the 20th of July, an armed gunman opened fire on a packed cinema in Aurora, Colorado, committing what is now one of the worst mass shooting incidents in the history of United States, in terms of the total number of persons shot.

Twelve people were killed and fifty nine injured in the attack orchestrated by James Holmes, a PhD Student at Colorado University.

During the assault, Holmes was armed with an AR-15 assault rifle, a Remington 12-gauge shotgun, two .40 calibre glock handgun, a CS gas canister, a ballistic helmet, and bullet proof armour. In the midst of this tragedy, many are questioning how a clearly unstable individual was able to acquire such an arsenal with relative ease. The nature of this incident has called into question whether amendments should be made to the laws concerning the sale of firearms in the United States.

As a result of the second amendment of the Bill of Rights, American citizens have the right to bear arms; however, the ease with which weapons can be bought varies from state to state.

The 1968 Gun Control Act, ensures that certain groups such as drug addicts, those committed to mental institutions, and those who have been dishonourably discharged from the armed forces, cannot legally obtain fire-arms. Federal Law also states that weapons must be registered to an individual, so as to prevent the illegal sale, and make tracing the user easier for the authorities.

In many US states, those who are legally allowed to own a gun require a permit to carry it in public, where as in other states such as Colorado, a gun may be carried if concealed to public view.

Despite these restrictions, gun crime in the US is still a huge issue and many blame the ease with which guns are accessible.

It has recently been discovered that the majority of the weapons purchases made by Holmes were made online.

As a result, there was no formal background check carried out; this is one of the many loopholes in American gun legislation, which varies from state to state.

In 2008, 67 percent of murder cases in the US involved the use of a gun, and there are an estimated twenty mass shooting events a year, this is an enormous figure which is compounded by the ease, with which the killers have been able to obtain their weapons.

The April 1999, Columbine High School massacre sparked a similar reaction to the Aurora shootings, many began to question how it was that gun control laws allowed two high school seniors to acquire two 9mm semi-automatics, and two shotguns. Following the incident at Columbine, laws were passed making it illegal to supply guns to minors, and ensuring the presence of safety locks on all firearms.

However, to many, these steps seem lacking, and were not passed without resistance from anti-gun control groups.

Whether or not the incident in Aurora will herald a change in US law concerning guns is a major issue.

There is currently a debate raging across the United States as to whether or not further restrictions on weapons would have made the killing less likely.

Some argue that had a person within the cinema in Aurora had a concealed weapon, they could have been able to stop James Holmes. The CDC reports 498,000 cases in which guns have been used to frighten away home invaders per annum in the US, giving impetus to the arguments that owning guns for protection is legitimate.

Others argue that as Colorado already allows the ownership of concealed weapons in public, there was not anything more that could have been done by those in the cinema.

Michael Bloomberg, New York Mayor, called for Barack Obama and Mitt Romney to take action, and address the issue of gun control, but both of the Presidential candidates have remained auspiciously mute on the issue.

The gun trade has long been a touchy issue in American politics, with Obama occupying a grey area, and not giving any real specifics on his intentions when he does address the issue of gun control.

Following the shooting of Senator Gabrielle Giffords, Obama called for “sound and effective steps” to ensure guns could not wantonly fall into the hands of criminals, but never followed this up with legislation, or even political discussion.

The President’s sentiment was the same following the shooting of Trayvon Martin in Florida, and a Whitehouse spokesman –  when questioned on Obama’s opinions on gun control following the Colorado shooting, claims that Obama supports ‘common-sense measures that protect second amendment rights of Americans, while ensuring that those who should not have guns under existing law do not get them’.

This is an example of the ‘on the fence’ political stance many politicians in the USA have adopted, whilst groups campaigning on the matter have become increasingly polarised, either mirroring the stances of the National Rifle Association (NRA), or the Brady Centre (a group dedicated to tighter gun controls and the prevention of gun violence).

Gun Violence and Responses in Europe

In comparison to much of Europe, American gun control appears very lax; however, similar massacres to that in Colorado have still occurred, despite the strictness of European Laws.

The responses to mass gun killings also vary between countries.

Although there has been some debate on the restriction of weapons sales in Colorado, it is at this time unlikely any serious amendments to US gun control will occur.

Whereas following the Dunblane School massacre in Scotland in 1996, drastic changes were made to UK gun legislation. Two amendments to the Firearms Act in 1997 outlawed private ownership of all handguns in Great Britain; this made almost all fire arms illegal, with the exception of some ‘long arms’ for sporting purposes.

The Whitehaven shootings by Derek Bird, in north-west England, resulted in a similar re-assessment of gun laws in Britain, but with less palpable results as no further amendments were made.

Norway has one of the most strictly regulated gun trades in the world, but recently Norway marked the first anniversary of its worst peacegime tragedy. On 22nd July 2011, 77 people were killed, and at least 300 injured, when Anders Breivik opened fire on Utøya Island, and detonated bombs in Oslo.

The fact that Breivik was able to acquire his weapons and carry out his attack, despite Norway’s gun restrictions was pointed out by former US Presidential candidate John McCain, who stated, ‘The killer in Norway was in a country that had very strict gun control laws, and yet he was still able to acquire the necessary means to initiate and carry out a mass slaughter’.

The response of the Norwegian government has been to tighten 'anti-terror laws', making it illegal for one person to plan an attack and criminalizing participation in terrorist training camps abroad.

Women and Children Most Vulnerable to Gun Violence

As the debate between those in favour and opposed to gun control wages, it is often over looked that those most vulnerable to gun crime are the same group, with the least involvement in the weapons trade, women and children.

In 2007, fire arms were the cause of over 5 percent of the total fatal accidents befalling 0-14 year olds in the United States.

Laws have been put in place to protect children from guns, but these are mostly state rather than federal laws.

Only 19 states have laws which threaten criminal prosecution, if a gun is not securely locked, and is able to fall into the hands of a minor; in addition to this, many states do not have laws removing fire arms from households, with outstanding domestic or child abuse charges against them.

Given the high number of accidents involving weapons, there is a very real call to see these laws extended across other states, or into federal law.

Guns Increase Chances of Women Being Murdered at Home

Armed violence against women in the United States is a serious and growing issue.

Recent studies conducted in the USA showed that gun ownership increased the chance of a woman becoming a victim of homicide at the hands of her husband, or boyfriend by 278 percent.

The presence of a gun in the home also has an impact on the instances of violent abuse on women by their partners; this is credited to the fact that the lethality of the weapon means they are unable to resist, and often find themselves helpless. If the abuser has a gun, it also reduces the likelihood that an outside party will be able to intervene and help women suffering from domestic violence.

Following the tightening of fire-arms ownership regulations in Australia in 1996, the number of homicides committed against women involving guns dropped by 57 percent.

Globally, guns are often used as a platform for abuses against women, and the USA is no exception to this rule.

Hopefully, something positive will come from this tragedy, to the benefit of those most perceptible to armed violence, but any real reform to USA gun legislation seems unlikely.