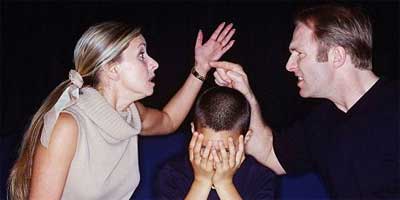 Children exposed to family violence show the same pattern of activity in their brains as soldiers exposed to combat, new research has shown.

In the first functional MRI brain scan study to investigate the impact of physical abuse and domestic violence on children, scientists at UCL in collaboration with the Anna Freud Centre, found that exposure to family violence was associated with increased brain activity in two specific brain areas (the anterior insula and the amygdala) when children viewed pictures of angry faces.

Previous fMRI studies that scanned the brains of soldiers exposed to violent combat situations have shown the same pattern of heightened activation in these two areas of the brain, which are associated with threat detection. The authors suggest that both maltreated children and soldiers may have adapted to be 'hyper-aware' of danger in their environment.

However, the anterior insula and amygdala are also areas of the brain implicated in anxiety disorders. Neural adaptation in these regions may help explain why children exposed to family violence are at greater risk of developing anxiety problems later in life.

Dr Eamon McCrory, lead author from the UCL Division of Psychology and Language Sciences and the Anna Freud Centre, said: "We are only now beginning to understand how child abuse influences functioning of the brain's emotional systems. This research is important because it provides our first clues as to how regions in the child's brain may adapt to early experiences of abuse in the home".

Dr McCrory added: "All the children studied were healthy and none were suffering from a mental health problem. What we have shown is that exposure to family violence is associated with altered brain functioning in the absence of psychiatric symptoms and that these alterations may represent an underlying neural risk factor. We suggest these changes may be adaptive for the child in the short term but may increase longer term risk".

In the study, which is published in the journal Current Biology, 43 children had their brains scanned using an fMRI scanner. 20 children who had been exposed to documented violence at home were compared with 23 matched peers who had not experienced family violence. The average age of the maltreated children was 12 years old and they had all been referred to local social services in London.

When the children were in the scanner they were presented with pictures of male and female faces showing sad, calm or angry expressions. The children had only to decide if the face was male or female - processing the emotion on the face was incidental. As described, the children who had been exposed to violence at home showed increased brain activity in the anterior insula and amygdala in response to the angry faces.

Professor Peter Fonagy, Chief Executive of the Anna Freud Centre and professor of psychology at UCL, said: "Dr McCrory's groundbreaking research has undoubtedly taken us an important step closer to understanding the devastation which exposing children to violence can leave in its wake. His exciting findings confirm the traumatic effects these experiences have on brain development.

Professor Fonagy added: "The report should energize clinicians and social workers to double their efforts to safeguard children from violence. By helping us understand the consequences of maltreatment the findings also offer fresh inspiration for the development of effective treatment strategies to protect children from the consequences of maltreatment."

Dr McCrory said: "Even though we know that maltreatment represents one of the most potent environmental risk factors associated with anxiety and depression, relatively little is known how such adversity 'gets under the skin' and increases a child's later vulnerability."

"The next step for us is to try and understand how stable these changes are. Not every child exposed to family violence will go on to develop a mental health problem; many bounce back and lead successful lives. We want to know much more about those mechanisms that help some children become resilient."