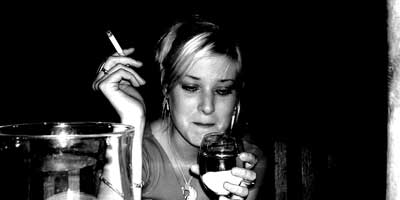 Is dating as dangerous as binge drinking and smoking to girls?

The UK mainstream media loves to pick up on any research that purports that 'teenage girls are out of control' (Mail Online 19 May 2006).

Public outcry over the rise in a so called 'ladette' culture in the UK has thus produced a great deal of public debate and consequent research concerned with specific health risks associated with the life styles of certain young woman. Much of the discourse surrounding this debate is classist and racist and smacks of white middle class fear of women from poor, non white and migrant backgrounds.

The message conveyed is that specific young women must be regulated and made docile by outside state and social forces.

Whilst dismantling state and social regulation of women and girls has been a founding tenet of the feminist and human rights movement, I want to draw attention to the way in which the regulation of 'risky' behaviour amoungst girls is increasingly posed as a fiscal liabilty in relation to the (potential) drain they may place on healthcare resources.

Importantly, I want to draw attention to the way in which specific risks to girls health are prioritised over others through this discourse. In prioritising specific life style factors because they produce particular illnesses that potentially pose a drain on healthcare resources, this fiscal responsibilising discourse elides the risks to girls of gender based violence and thus placates the persistance and pervasiveness of gendered power in society.

Rather, studies like those conducted by Pritchard fail to address the gendered nature of so called 'risk behaviours' and do not investigate the prevalence and impact of gender based violence on the lives of girls today. However, the blame must be placed on those governments who prioritise research for cost benefit outcomes in order to produce data that focuses on the behaviour of girls rather than investigating how to improve their lives.

Surely the headlines should read 'teenage boys and men are out of control'?

While I do not want to reduce the importance of the health risks posed to girls by alcohol, tobacco and unprotected sex, what I think we need to ask is: is dating as dangerous as binge drinking and smoking to girls?

When an NSPCC study found in 2009 that 1 in 6 heterosexual girls in the UK aged between 13 and 17 report being pressured into sexual intercourse and 1 in 16 report being raped whilst in intimate relationships, surely the headlines should read 'teenage boys and men are out of control'? (Barter, C.A. et al, 2009, 'Partner exploitation and violence in teenage intimate relationships').

'The total cost of domestic violence to services (Criminal Justice System, health, social services, housing, civil legal) amounts to £3.1 billion, while the loss to the economy is £2.7 billion.This amounts to over £5.7 billion a year,' (Walby, S. 'The Cost of Domestic Violence', 2004).

While I find these cost statistics problematic, sadly the measurement of the effects of gendered based violence in financial terms to the state, will probably hold more sway for those in power than the less fiscally tangible damage done to girls. However, how these cost measurements become operationalised is a different story.