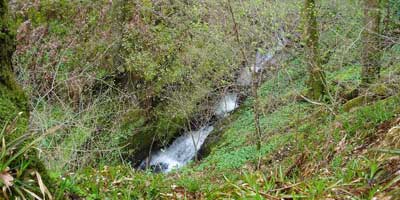 Walkers enjoying some of Scotland’s spectacular scenery are surprised to come across a group of headscarved Muslim women determinedly sawing branches off fallen trees.

With Scotland’s Asian community largely concentrated in urban areas, it’s still unusual to meet its members in the depths of the country.

But as the women in Dollar Glen halt work to let people pass, there’s a real warmth in the exchange of pleasantries.

Volunteering opportunity for the women of Edinburgh's Blackhall Mosque

So there should be, as these five middle-aged women and two teenage girls are putting their arms and backs into removing fallen trees from the path that climbs up the steep sides of the wooded gorge.

This is voluntary work for the National Trust for Scotland (NTS), which owns the glen. For the women from Edinburgh’s Blackhall Mosque, it also provides an opportunity to carry out some conservation work which will count towards their individual John Muir Awards.

That it is also a welcome day out of the city is evident in the enthusiasm with which they soak up the leafy surroundings.

“The waterfalls are really lovely,” says Kauser Dhulan, who describes herself as a housewife with two children, a daughter of 19 and a son of 18, who is taking a break from lopping branches off tree limbs.

She and the other women say they would not venture into the countryside on their own.

A passion for gardening

Ruby Hussain, a mother of four who range in age from 10 to 20, is in her element. She loves trees. “You would know that if you came to my house. I have one wall which is covered with a hanging of a forest scene.”

At home in Edinburgh she spends a lot of time “and money” on her garden. Although she likes neat gardens and well-cut lawns, she relishes the wildness of the woods. This is her second outing to Dollar Glen, where the group previously came for a more energetic walk as part of the explorer section of their John Muir Award. “It was very wet but it was great. I love being out in the green places,” she adds.

Lunch is a shared picnic of sandwiches, savoury rice and homemade coconut pastries punctuated by mobile phone calls to check on the wellbeing of their families, whether dad’s in charge or mother-in-law is feeding the children.

Tasmin Rafiq’s husband is off to the shops for the nappies he forgot.

Environmentalism is an important part of the Muslim faith

Sitting on the lawn in front of the historic 15th century Castle Campbell with a view over a vast swathe of central Scotland, the women relax in the sunshine. The depth of their commitment to active environmentalism, however, would surprise many outside the Muslim community.

Nasim Azad, the mosque’s project manager, explains it is an important part of their faith. “The Koran tells us planting a tree is an act of charity because so many people, birds and animals benefit from it,” she says.

Their involvement with the NTS came about through Working with Difference, a group dedicated to increasing the participation of ethnic minorities and disabled people in wider society through voluntary work. In turn, NTS properties have provided the women’s group with a focus for outings and access to the great outdoors.

Learning to drive a minibus

They have ambitions to be more adventurous. One woman from the mosque is taking part in the women’s outdoor leadership programme run by the Forestry Commission. She’s learning how to drive a minibus and once she has her certificate, will be able to take groups out on walks.

The mothers in this group see this as a great benefit to teenage girls. “Many girls are interested in environmental activities and if they are with a group of women they can enjoy the outdoors without wearing big veils,” says Nasim.

The two 14-year-olds co-opted into the Dollar work party, Sehrish Azad and Samerak Ahmad, had their doubts about leaving their home comforts for a day in the woods but both concede it’s been enjoyable.

As for the gaffer, Callum McNeill-Ritchie, the NTS ranger at Dollar Glen, he is full of praise for the women from Blackhall Mosque.

They have just proved his contention that a group working together tends to achieve more than the same number of individuals.