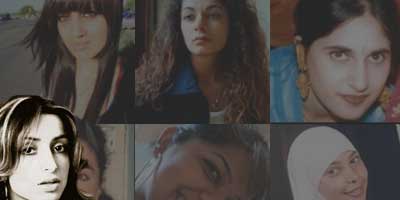 Deeyah is a critically acclaimed singer and composer from Norway and is now a film-maker and prize winning human rights activist.

Chris Crowstaff caught up with Deeyah while she was in the UK, working on a film about an Honour Killing which took place in London in 2006.

What motivated you to devote your time to raising awareness about Honour Killings?

Honour Killings represent the ultimate in control and oppression of women.

The whole idea is that, because these women have 'transgressed', their existence is perceived to be a stain on the reputation and standing of the men, so the disgrace must be 'rectified.'

Often the intention of perpetrator, or perpetrators, is to wipe out any memory - photos, clothes, attachments. Like they were never here.

7th April marks the anniversary of the public killing of Du'a Khalil Aswad and the International Honour Killings Awareness Day.

On 7th April this year, I launched my new site, Memini, which is a virtual site of remembrance for victims of Honour Killings.

Is there a parallel between Honour Killings and crimes of passion, for example where a jealous husband murders his wife and sometimes even their children?

Honour Killing is not really a crime of passion. It's pre-meditated. And it's not the crime of just one person. It's typically planned by a number of people, and not something that happens in the heat of a moment of passion or insanity between one person unleashing violence against another.

It's very much a sypmtom of a patriarchal society and it's used as a threat to other women.

In its essence it's about controlling women's behaviour. So long as she doesn't transgress before marriage, then she's pure and not tainted. Or fall in love with someone the family doesn't approve of.

It's about removing the woman's complete free choice in matters of marriage, career/education and even style of dress and friends.

Do Honour Killings happen here in the UK?

Yes, I'm in London to work on a documentary film about an Honour Killing, which is due out later this year.

It's about a young British Kurdish woman who was murdered in 2006 in London. She was married at 16 to a man who was 10 or 11 years her senior. She was beaten and raped in her marriage.

Once she had left her husband and found some happiness by falling in love with someone who she chose, she was murdered by her family for bringing shame on them.

Sadly, Honour Killings are certainly not rare here in the UK.

Many men often feel emasculated when they arrive here from more patriarchal cultures. They feel like they are losing control over what is "theirs" (their women) who are growing up in Western society.

In general, women from these affected communities find it easier to get jobs here.

The men often have to take demeaning jobs. Their manhood is damaged and they loose their sense of identity.

Sometimes the message and attitudes in the broader 'Western' society towards men of these communities can be, 'you are a Paki terrorist - you are nothing.'

The men are used to a culture where the highest currency is honour.  And the reputation of a man depends on the behaviour of the woman.

It's like something has been ripped out from their core.

Are Honour Killings common here in the UK?

In Pakistan and other countries like India, Iraq, Afghanistan, Jordan, there's a far greater occurrence because it's considered less of a crime. It's harder to bring such cases to prosecution.

An Honour Killing is a planned, group decision. It's a pre-meditated, collective decision. Basically, it's an 'organised crime'.

Within this cultural and social structure of honour, there are many ways of correcting the perceived loss of honour. Forced marriage,  for example, is a very common 'remedy' to the loss of honour. Marriage can be considered to be a quick fix to a blow to the family reputation. Many will say: 'marry her off quickly so the problem goes away'. Other women may be threatened or pressured into conforming. Honour killing is the most extreme and the final solution; the woman has perceived to have transgressed to such an extent that the family cannot bear the brunt of the shame and damage to their reputation and feel there is no other way but to physically terminate her existence altogether.

I suppose what is essential to examine here is what are we doing as a part of these affected communities to make these families feel that this is the only way out? That they can so passionately believe that this is somehow the only solution... to take the woman's life? The reason I say this is because these killings are not for any personal secret satisfaction, these killings happen for 'show' - my friend Joanne Payton (of the International Campaign Against Honour Killings) calls it 'theatrical killings'.

I believe honour killings are a public display of control, strength, dominance and restoration of what has been lost by the woman's behaviours.

How can the international community make these killings so shameful and unacceptable that no one would think that they might gain anything from such violence?

This is another aspect of what makes Honour Killings, in its makeup, different from murders stemming from what we know as domestic violence or crimes of Passion - as you say - where the perpetrator is aware that murder is something that is NOT accepted, excused or justified by society at large-- in contrast the perpetrators in honour killings are not killing for themselves, they are killing to show off to us in the community and they often find sympathy and understanding within the community.

I would like to say and clarify this is not to say that all people within these communities accept or agree with these murders, but maybe our silence gives a passive permission on some level. If we can take to the streets protesting books, torture, cartoons, wars or other issues surely the murder of our innocent young women warrants similar outrage...?

Here in the UK, the legal system is a deterrent. We are privaleged and fortunate with the protection we have. But the sentences need to be even tighter and stricter.

Does education reduce the incidence? Does it happen more amongst less well-educated families and communities?

It is more common with less well-educated families, yes. It's less common amongst well-educated members of society. But really it happens across the board.

Do you feel that more Muslim women are speaking out against honour killings now?

Yes but it's important that everyone speaks out. That women stand in solidarity with women.

To stay on a safe platform would be a betrayal.

We need to work tirelessly, passionately, day in, day out and be available for what we are asked to do.

These victims are martyrs for love. They must not be wiped away, forgotten.

It's very difficult. But we need to be very, very honest. There must be no compromise on the reality. But humility and respect is needed - not sensationalism.

If you worry about offending the Muslim community by criticising honour killings, then you are complicit in perpetuating it. It's not Islamophobic to protest against honour killings.

I'd rather hurt feelings than have throats slit. Women need to stand in solidarity and break through stereotypes.

If you are respectful and sensitive, that will come across. But don't water down the truth.

Otherwise it appears that I, as a brown Muslim woman, am worth less because you won't hurt the men but brown women get hurt.

We need to show that we hear. That it does matter. That we will support them. That we want to build an inclusive, respectful society.

We don't want the very extreme religious leaders. But one who cares for our own community, based on love, respect, dignity and equality.

Are honour killings specific to women from Muslim societies?

Male honour killings happen too, by the woman's family. Men are sometimes victims as well as women.

I have not come across any stories where we see a family killing their own son for bringing shame on them, that seems to be reserved only for daughters (unless perhaps the son is gay).

I would like to be very clear and point out that this is a tribal pre-Islamic custom that has remained in our cultures through time - which happens, for example, in Hindu, Sikh and Christian communities as well.

Many think that this is somehow a Muslim created or Muslim exclusive issue, this is simply not correct.

Yes it is prevalent within Muslim communities today but the data and countless stories show that in fact this is a rampant issue within other religious communities as well because this is rooted in cultural constructs across religious boundaries.

It happens in very strict patriarchal cultures. This is why it's so hard to stamp out.